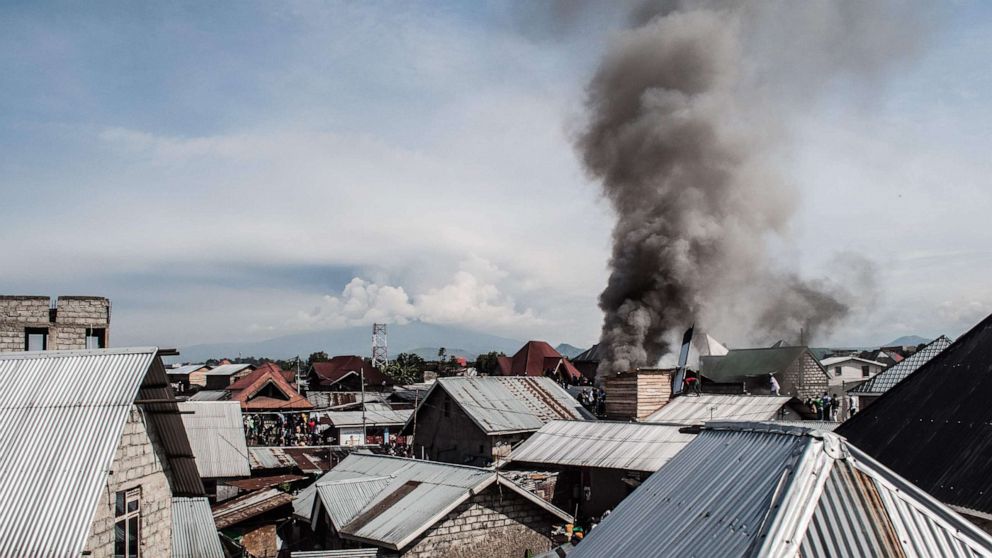 More than two dozen people are feared dead after a small passenger plane crashed into homes in a densely populated area of the eastern Democratic Republic of the Congo on Sunday.
The aircraft, operated by private local airline Busy Bee Congo, went down Sunday morning shortly after takeoff from the Goma International Airport, plunging into houses in the Mapendo district of Goma in North Kivu province.
At least 17 passengers onboard the plane as well as both pilots died in the crash. An unknown number of people on the ground were also killed, according to a press release from the provincial governor’s office.
This image grab taken from a video shows people gathering near the wreckage of a plane after it crashed on takeoff into a densely populated area of Goma in the Democratic Republic of Congo, Nov. 24, 2019.
Three people who survived the crash were transported to a hospital in Goma for treatment, while rescuers continued to pull lifeless bodies from the burning wreckage.
The official death toll is expected to increase, the governor’s office said.
Rescuers attend the scene of an aircraft operated by private carrier Busy Bee which crashed in Goma, Congo, Nov. 24, 2019.
The cause of the crash was not immediately known and is under investigation.
Images showed smoke rising from the rubble and into the sky above the packed residential neighborhood in Goma, a lakeside city home to two million people.
Rescuers remove bodies from the debris of an aircraft operated by private carrier Busy Bee which crashed in Goma, Congo, Nov. 24, 2019.
Busy Bee Congo released a statement confirming the “accident” and expressing “sympathy for the families and friends of the passengers and flight crew involved.”
“At this point, we have no further information about the circumstances of the accident and Busy Bee Congo is not in a position to speculate on the causes of this tragedy,” the airline said in the statement Monday. “We are currently working with the authorities to identify the accident and to take care of the families of the deceased and injured.”

Pelosi should block impeachment trial until White House is...

Historian Joseph J. Ellis applauds Nancy Pelosi's pause, suggesting she advise Mitch McConnell that she will forward the impeachment recommendation as soon as the Supreme Court rules on the three cases currently pending in the lower courts concerning the pres…
Read more

The Ohio House of Representatives has passed a bill that would prohibit municipalities from restricting the use of plastic bags.
Read more