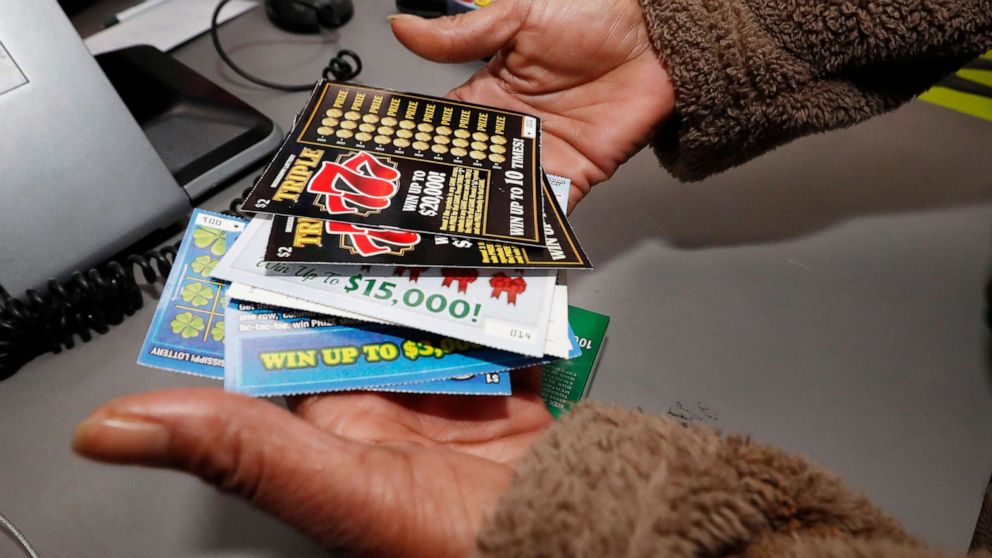 Mississippi residents lined up on Monday to buy lottery tickets for the first time in the state’s history.
However, only scratch-off tickets were for sale, while jackpots such as the Powerball and Mega Millions games will be available starting Jan. 30, according to the Mississippi Lottery website.
Legislation allowing lottery games in Mississippi was passed in 2018. Winners can choose to remain anonymous as long as they provide a valid form of identification when claiming their winnings.
The decision faced strong opposition from churches that wield political power, The Associated Press reported.
A customer shows her scratch-off tickets after making an early morning purchase from at a Jackson. Miss. RaceWay store, Nov. 25, 2019. Licensed lottery retailers in the state began selling tickets Monday.
Lottery tickets were available in about 1,200 convenience stores on Monday, according to AP.
The first $80 million in proceeds the lottery generates every year will go to state infrastructure, and any revenue after that will go to state education, according to the Mississippi Lottery website.
The state had generated $300,000 in ticket sales in the first two hours after the scratch-offs became available, AP reported.
Unlike other states, which sell lottery tickets as cash-only purchases, Mississippi allows people to use a credit or debit card without an additional fee, ABC Jackson, Mississippi, affiliate WAPT reported.
Alabama, Alaska, Hawaii, Nevada and Utah are the five remaining states without lotteries.

German flagship airline Lufthansa has agreed to a compromise worked out between the government and European Union, overcoming a major hurdle toward final approval of a 9 billion-euro ($10 billion) bailout from Berlin
Read more

Radcliffe read he first chapter of the first book for fans – and the next celebrity narrator will pick up where he left off.
Read more

David Arquette will return for Scream 5 as Deputy...

Principal photography will begin later this year in Wilmington, N.C., when safety protocols are in place.
Read more

That smart TV you just bought may be spying...

Those Black Friday and Cyber Monday super sales are not only a boon for your bank account, but may also reap serious rewards for cyber criminals intent on causing harm, according to the FBI.
Read more

The event - usually involving hundreds of riders on horseback - is being marked in a new manner.
Read more

Members of the music and entertainment industries blacked out their social media feeds on Tuesday and pledged to not share content on social media for the day in order to raise awareness of inequities faced by black Ameri...
Read more

MSNBC weekend host Joy Reid is reportedly in line to take the 7 p.m. weekday slot formerly filled by Chris Matthews, according to a report in The Wall Street Journal.MSNBC's 7:00 pm slot has been occupied by a seri...
Read more

Activity on underground forums suggests deepfake ransomware could take off in the near future.
Read more

Survey shows 1 of every 3 Americans knows someone...

Thirty-six percent of Americans say that someone they know outside of their immediate family or work colleagues has been sick with COVID-19, according to a new poll.That number has more than tripled since March, wh...
Read more

DC man shelters protesters at his home after city-wide...

A Washington, D.C., man said he sheltered 70 protesters overnight after officers used pepper spray on them outside his Northwest home Monday evening after the city-wide 7 p.m. curfew went into effect."...
Read more

Review: Coogan and Brydon spar again in ‘The Trip...

Most franchises that have made it to four films have by then traipsed the galaxy, pulled off a series of daring heists or freed Willy many times over
Read more

Utilities want to charge customers to make up for...