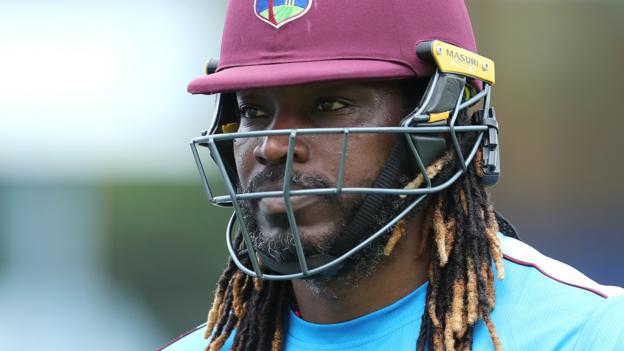 Chris Gayle has played 400 Twenty20 matches and holds the record for the highest T20 score of 175 not out
West Indies batsman Chris Gayle says he “does not get respect” in global Twenty20 franchise leagues.
Gayle was speaking in a heated news conference after his exit from South Africa’s Mzansi Super League (MSL).
The 40-year-old had been playing for champions Jozi Stars but had scored just 101 runs in six innings and his side had not won a match.
“As soon as I don’t perform for two or three games, then Chris Gayle is the burden for the team,” he said.
“I am not talking for this team only. This is something I have analysed over the years playing franchise cricket. Chris Gayle is always a burden if I don’t score runs.
“It seems like that one particular individual is the burden for the team. And then you will hear bickering.
“I am not going to get respect. People don’t remember what you have done for them.”
Gayle, one of the tournament’s marquee players, has scored 13,152 in T20 cricket and has played for more than 20 teams in domestic leagues around the world.
He scored 47 runs in his first five matches in this year’s MSL, then hit 54 off 28 balls in his final match for the Stars before his scheduled departure.
The Stars have lost all six of their games, are bottom of the league table and cannot qualify for the knockout stage despite having four matches remaining.
The team’s chief executive Jono Leaf-Wright said Gayle was not a “burden” on the side and called the left-hander “sensitive”.
“In Chris’ head, he feels that when he doesn’t perform – because there are such expectations from the franchise, the fans – that he’s the reason the team is not performing,” Leaf-Wright said.
“I know Chris well. He seems like he’s the big character, lots of bravado, the swag and all that stuff – but he’s actually a sensitive guy, and unfortunately, when he doesn’t perform he really takes it to heart.
“He’s certainly no burden on our side.”
Gayle was expected to retire from one-day international cricket in August but reversed his decision and is still available to play T20s for West Indies.

A House committee has approved a $694.6 billion defense spending bill that includes money for the Army to change Confederate base names and that seeks to block President Trump’s use of Pentagon funds for his border wall.The House Appropriations...
Read more

Target and Walmart Sales Details as Retailers Compete with...

Consumers will be spoilt for choice over October 13 and 14, as Walmart and Target will both host sales during the Prime Day event.
Read more

Flynn suspects the current judge overseeing his case of wanting to "propose contempt and perjury charges against" him.
Read more

Coronavirus: Nurse and doctor wed in hospital where they...

Jann Tipping and Annalan Navaratnam were given special permission for the ceremony in London.
Read more

Rep. John Garamendi (D-Calif.) on Friday said the director of the National Institute of Allergy and Infectious Diseases was told to "stand down" and not appear on five Sunday morning talk shows to discuss the coronavirus....
Read more

Every Conservative to Attack Cardi B For ‘WAP’

Deaths are being ignored by safety regulators as nursing home employees continue to die of Covid-19.
Read more

Could old vaccines for other germs protect against COVID-19?

Scientists are studying whether vaccines for polio and tuberculosis could offer protection against coronavirus while we wait for a coronavirus vaccine.
Read more

The release of data for loans larger than $150,000 divulges just a minority of the program’s total borrowers.
Read more

Florida deputy on leave after grabbing Black teen by...

The 17-year-old was injured during the interaction and was transported to Sarasota Memorial Hospital.
Read more

Only 20% of Americans Want States To Relax Coronavirus...

Four out of five American voters want public health restrictions amid the COVID-19 pandemic to either remain the same or become more strict, according to a poll released Thursday.
Read more

The first black person to complete his studies at Eton was banned from the school in 1972.
Read more

Person in custody in killing of tech CEO found...

A majority of Americans said in a new poll conducted prior to Justice Ruth Bader Ginsburg's death that the Senate should hold confirmation hearings on a Supreme Court nominee for any vacancy this year.Sixty-seven p...
Read more

‘Animal Crossing: New Horizons’ Fishing Guide: Where to Get...

There are 80 species of fish to catch.
Read more

Freak natural disasters seem to be everywhere in the crazy year 2020. But experts say we’ll probably look back and say those were the good old days.
Read more

How to Watch Andrea Bocelli’s Easter Concert Live From...

The acclaimed opera singer will offer a special Easter concert to stream on YouTube for fans across the world.
Read more

Hip-hop has been addressing prison reform for decades, but an album released Friday was actually produced, written and recorded behind prison walls by...
Read more

Donald Trump is the anti-law-and-order President, despite his claims to the contrary. Trump touts law and order when it suits him, but attacks the courts and erodes our judicial system when it comes to his agenda and actions, writes Julian Zelizer.
Read more

Migrant crossings: What happens to migrants who reach the...

The government wants to cut the number of migrants crossing the Channel.
Read more

Fire at Newton-le-Willows recycling plant on hottest day of...

Twenty fire engines are at the scene of the blaze on the Sankey Valley Industrial estate in Newton-le-Willows.
Read more

Artist Ralph Serrano was unable to find work when the coronavirus pandemic spread through New York City. Serrano decided to move back to Puerto Rico, having to leave much of his art behind. Discovered among the trash, his paintings found new homes and Ralph f…
Read more

Highlights: Trump, Allies Make the Case for a Second...

On the final night of the Republican National Convention, President Trump promised to lead America through its current crises while his daughter Ivanka and other advisers spoke about why he deserves a second term. Photo: BRENDAN SMIALOWSKI/AFP
Read more

McEnany likens schools to ‘essential places of business’ in...

The Taliban are warning the Afghan government against any attacks on Taliban members who are to be freed from prison in the final prisoner release under a U.S.-Taliban deal
Read more

‘We have no choice’: Trump announces surge of federal...

President Trump announced a surge in federal law enforcement to communities across the country. The president also said "hundreds" of officers would be sent to the city of Chicago.
Read more

Spectators will also be allowed to attend some sports as part of a raft of changes to Covid-19 restrictions.
Read more

Former Chicago Bull Horace Grant has refuted Michael Jordan's statements about him giving information to Sam Smith for his book 'The Jordan Rules.' Horace then went on on to say that if anybody is the snitch, it's Michael Jordan for revealing the early Chicag…
Read more

Overall, 52 percent of Pennsylvania voters trust Joe Biden more to handle the pandemic, while 32 percent trust President Donald Trump on the issue, according to a recent poll.
Read more