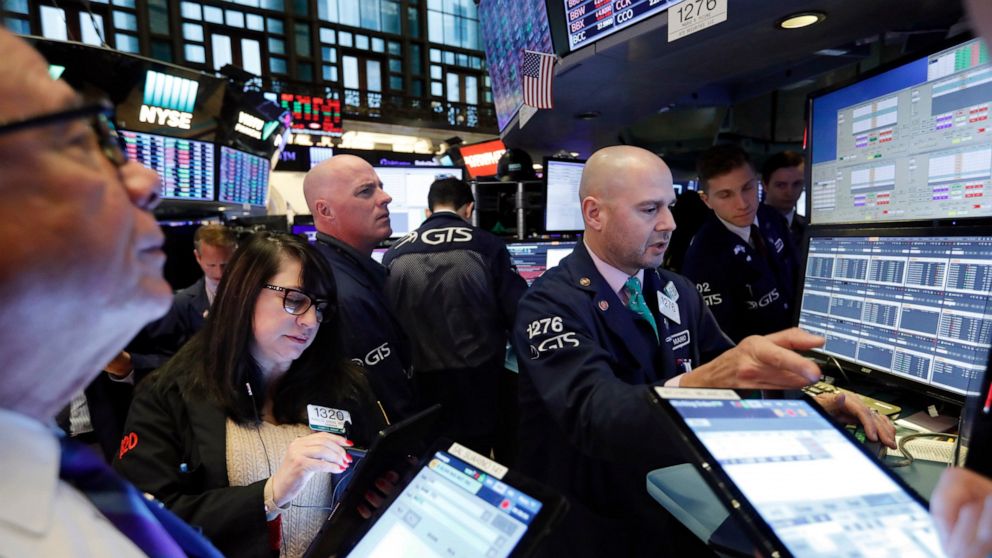 Stocks wobbled between small gains and losses on Wall Street Tuesday as investors kept a close watch on the latest developments coming out of U.S.-China negotiations.
The cautious stance by investors follows a record-setting day for the major indexes, fueled by hopes that the worlds two largest economies are making progress toward ending their trade war.
China said that key officials spoke with U.S. Trade Representative Robert Lighthizer and Treasury Secretary Steven Mnuchin early Tuesday. They agreed to more talks aimed at reaching a deal. The latest bit of information comes a day after China’s new guidelines for the protection of patents and copyrights, which has been a key issue in the dispute.
Retailers made some of the more significant gains in the early going, including Best Buy, after reporting solid earnings. Technology and industrial companies also rose.
Bond prices rose. The yield on the 10-year Treasury fell to 1.73% from 1.76% late Monday.
The lower yields weighed on banks, which use them to set interest rates on mortgages and other loans. Bank of America, Citigroup and Wells Fargo all fell.
Health care stocks were among the biggest losers in the early going. Amgen fell 1%.
China remains the key focus for investors, though Wall Street will also have several economic reports to assess this week, along with the tail end of corporate earnings. On Wednesday, investors will see more home sales data, the latest GDP figures and a key measure of inflation. Heavy equipment maker Deere will report earnings.
KEEPING SCORE: The S&P 500 index rose 0.1% as of 10:10 a.m. Eastern time. The Dow Jones Industrial Average rose 30 points, or 0.1%, to 28,096. The Nasdaq rose 0.1%. The Russell 2000 index of smaller company stocks rose 0.3%.
European and Asian markets were mixed.
MIXED SHOPPING BAG: Retailers are closing out the latest round of corporate earnings with varied results. Consumer electronics seller Best Buy rose 7.4% after handily beating Wall Streets profit expectations for the quarter while giving a surprisingly good profit forecast.
Dicks Sporting Goods surged 16% after blowing away analysts profit forecasts for the third quarter. Discount retailer Dollar Tree plunged 15.6% after its profit fell short of Wall Street expectations.
FASHION FORWARD: PVH rose 1.6% after the owner of Calvin Klein and Tommy Hilfiger brands raised its profit forecast for the year. The company also beat Wall Streets third-quarter profit and revenue estimates.

Five key developments on the spread of coronavirus in...

The coronavirus outbreak is spreading worldwide after killing hundreds in China -- and there's no end in sight.
Read more

Investors who claim Donald Trump ripped them off by endorsing a troubled multilevel marketing company on his “Celebrity Apprentice” reality-TV show are attempting to force Metro-Goldwyn-Mayer to hand over unaired footage of the program to bolster their case.
Read more

Donald Trump touches down in UK ahead of Nato...

The US president is expected to visit Buckingham Palace for a reception, before meeting world leaders.
Read more

PENSACOLA, Fla. - FBI officials broadened their probe Saturday into the deadly shooting rampage at a Navy flight school here amid reports that several of the alleged gunman's Saudi compatriots took video footage as the killing spree was underway. The shooti…
Read more