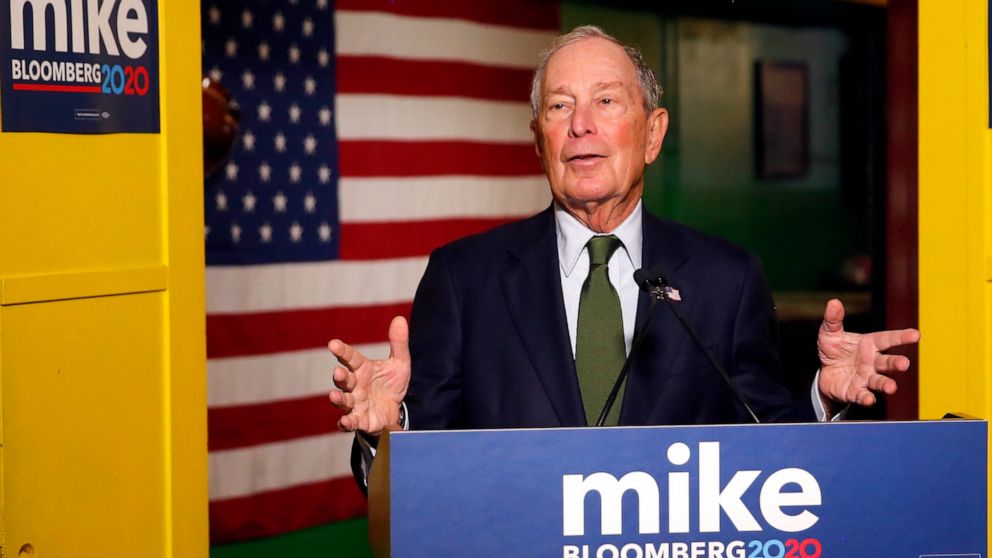 President Donald Trumps campaign says it will no longer give passes to Bloomberg News reporters to cover its rallies and other campaign events.

When Bloomberg announced his candidacy, Micklethwait said his news organization would not investigate the boss or other Democratic candidates. But he said the Trump administration would continue to be covered.

Some critics said that has put Bloomberg reporters in a difficult position, made more so by the Trump campaigns announcement on Monday.

The extent of the outage was not immediately clear.
Read more

Here's what you need to know to Start Your Week Smart.
Read more

The 254-foot-long billboard will be one of the ways the team plans to feature Black Lives Matter throughout the season.
Read more

Brad Balukjian tore open a pack of 1986 Topps baseball cards, chewed the stale, brittle bubblegum and then planned a journey most sports fans could only dream about
Read more

Netflix defends ‘Cuties’ as ‘social commentary’ against sexualization of...

Asian shares fall as caution sets in after Wall...

There's something about the way it feels that you can't capture in photos. Walking in and being in a stone vaulted hallway, it just feels like a really old castle.
Read more

Brad Parscale, President Trump's campaign manager, said 300,000 tickets have been registered for the campaign's upcoming rally in Tulsa, Okla.Parscale said the event is going to be "epic" and that the campaign is "...
Read more

The population of San Quentin state prison has been ordered to be reduced to less than half its capacity by a California appeals court....
Read more

The actor also criticized commentator Ben Shapiro in a response to his tweet warning about white supremacists.
Read more

How a New Wave of Podcasts Is Shaking Up...

Small non-state outlets are building a community of like-minded progressives among young Chinese people and challenging the state’s grip on coverage of the United States and the world.
Read more

A "poisonous ideology" endures despite the group losing territory in Syria and Iraq, a minister says.
Read more

How India helped Snapchat increase its users and revenue?

Snapchat has said its daily user base and advertiser revenue have increased, even during the pandemic. And India is a key link in its growth chain.
Read more

The musician admitted that this year has sucked and he can't wait for normal life to resume once again.
Read more

Young patient caught coronavirus at party, spread it to...

Parkland Hospital in Dallas, Texas, was caring for about 170 coronavirus patients as of Monday, though one case in particular shed a cautionary tale.
Read more

A man who provided massages for female athletes at the University of Kansas is facing six new misdemeanor charges of sexual battery.
Read more

Medical staff say bonus payments have not arrived and they are concerned about a lack of protective equipment.
Read more

House subcommittee requests information from Ring about cooperation with...

A House subcommittee is asking Amazon's home security outfit Ring for information about its partnerships with city governments and local police departments as well as its data protection policy.Rep. Raja Krishnamoo...
Read more

Minneapolis to name stretch of street for George Floyd

Inside Oxford’s Vaccine saga: From Wild Hype to Sobering...

Once hailed as the world’s best hope, the Oxford/AstraZeneca vaccine trial hits a bump in the road—and that might be good news.
Read more

305 Fitness is certifying out-of-work fitness instructors to teach its method and help them generate a side income.
Read more

U.S. residents have expressed concerns about safety if a COVID-19 vaccine is rushed into production before Election Day on November 3.
Read more

Democratic Gov. Laura Kelly has vetoed a sweeping coronavirus bill that would have given the GOP-controlled Kansas Legislature control over the state’s pandemic response
Read more

"The Michigan GOP is wasting the court's time and the taxpayer's dime," said MDP chair Lavora Barnes in a Wednesday statement.
Read more

Majority of voters say Trump should not nominate a...

A majority of voters say President Trump should not nominate a Supreme Court justice this year, according to ...
Read more

The University of California system has named Dr. Michael Drake to replace Janet Napolitano and become the first Black president in its 150-year history
Read more

Hospital bosses in England felt "in the dark" after ministers said staff would have to wear surgical masks.
Read more

Plane forced to land after woman allegedly fakes medical issue to get...