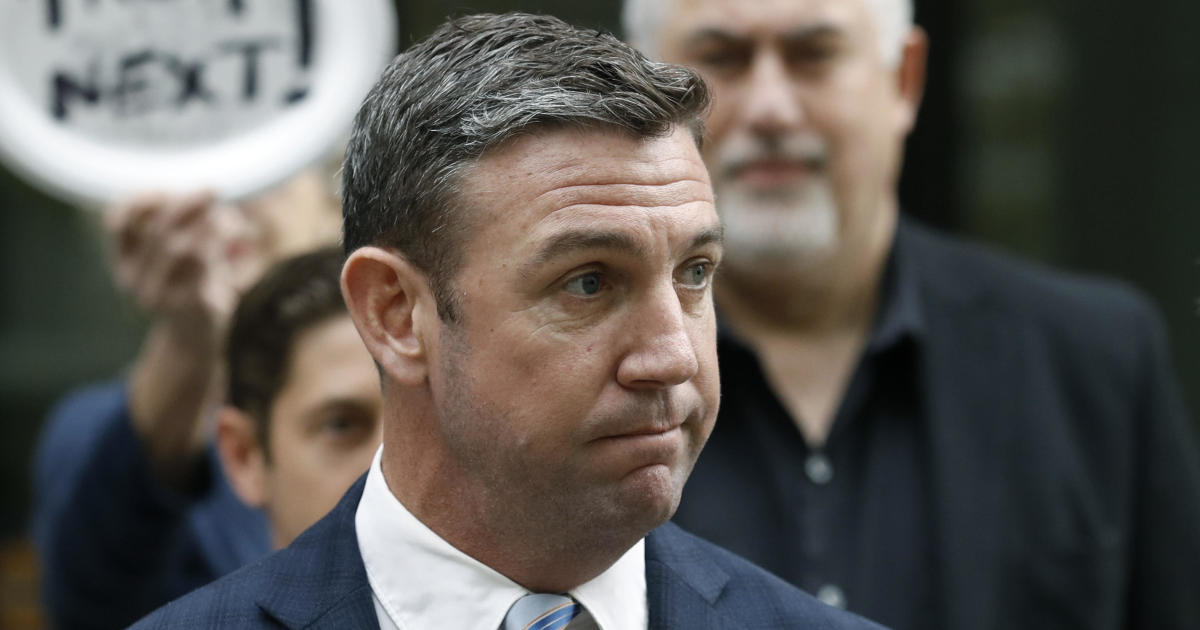 Washington — Republican Representative Duncan Hunter has pleaded guilty to conspiring to steal campaign funds, reversing his previous not guilty plea after spending months decrying and denying the allegations against him.

The California congressman entered his guilty plea in federal court in San Diego, California, on Tuesday, admitting that he knowingly and willfully took hundreds of thousands of dollars in campaign cash so that he and his wife, Margaret, could maintain their lifestyle. Margaret Hunter pleaded guilty in June.

Hunter, 42, faces up to five years behind bars when he’s sentenced in March, but federal prosecutors are pushing for a little over a year. The charge also comes with a fine of up to $250,000.

“This was not an accounting mistake by his campaign. This was a deliberate, years-long violation of the law,” Assistant U.S. Attorney David Leshner said in a statement. “Congressman Hunter used the power of his position to fund a lifestyle out of his reach, unwittingly financed by those who put him there. His guilty plea entered today acknowledges and accepts responsibility for his conduct.”

Hunter told KUSI News on Monday that he wanted to avoid a public trial because “it would be really tough” for his three children.

The California Republican won reelection to Congress in 2018, after he was already charged. He is up for reelection in 2020, and hasn’t indicated whether he will resign.

Hunter insisted for months that he was the target of a political “witch hunt,” insisting the allegations lacked merit.

Ossoff just short of 50% threshold for US Senate...

Media executive Jon Ossoff is just short of the 50% threshold of votes he needs to avoid a runoff election in Georgia's Democratic primary for U.S. Senate
Read more

The Latest: New Orleans police use tear gas on...

Tucker: Our leaders ‘wasted literally years accusing each other...

Tucker Carlson opened his program Tuesday night by bashing proponents of the Russia collusion narrative, saying  China was the biggest beneficiary of the controversy that engulfed the first two years of the Trump presidency.
Read more

WHO official says agency not invited to take part...

China has not invited the WHO to take part in an investigation into the origins of the coronavirus outbreak, according to an official with the organization.
Read more

The Papers: ‘BoJo’s Angels’ and ‘fiasco’ over PPE China...

The PM's "heartfelt tribute" to NHS staff after leaving hospital features on all of Monday's front pages.
Read more

How the coronavirus pandemic will shape the future of...

This year's college graduates are entering the worst job market since the Great Depression. Charlotte Alter of Time spoke to CBSN about her conversations with members of the Class of 2020, whose futures will be shaped by the coronavirus pandemic.
Read more

Brooks' widow sobbed as she asked a Fulton County judge not to grant bond, saying "My husband didn't deserve to die."
Read more

Ken Osmond, Eddie Haskell on “Leave It to Beaver,”...

Actor became so typecast as Haskell it led to a second career, as a police officer.
Read more

Illinois Gov. JB Pritzker (D) said Sunday that for many weeks the White House wasn't helpful in aiding states amid the coronavirus pandemic."It's the governors that have risen to the challenge. I...
Read more

Off-duty officer in Trump hat placed on leave for...

An off-duty police officer in Missouri has been removed from his official duties and placed on administrative duty pending an investigation after he was seen in a viral video threatening a man following a car a...
Read more

Gov. Kemp's order allowing some businesses to reopen requires customers be screened for symptoms, frequent cleaning and that staff be given protective gear.
Read more

Whitmer's divisive "Stay Home, Stay Safe" executive order is due to end on May 15.
Read more