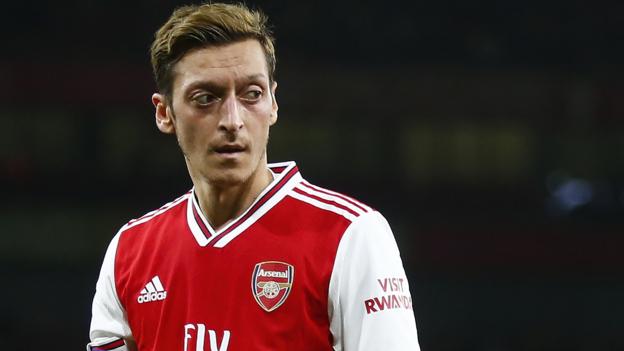 Ozil, a former Germany international, has been at Arsenal since 2013

Ozil posted on social media about the treatment of Uighur Muslims in China.

Arsenal distanced the club from the German’s views, saying it is “always apolitical as an organisation”.

The Global Times described Ozil’s comments as “false” and claimed he had “disappointed” football authorities.

In addition, the Chinese Football Association said Ozil’s comments were “unacceptable” and had “hurt the feelings” of Chinese fans.

CCTV will now show Sunday’s game between Tottenham and Wolves, instead of a live broadcast of Arsenal’s home match with the reigning Premier League champions.

In his social media post Ozil, who is a Muslim, called Uighurs “warriors who resist persecution” and criticised both China and the silence of Muslims in response.

China has consistently denied mistreating Uighur Muslims in the country.

Rights groups say about a million people – mostly from the Muslim Uighur community – are thought to have been detained without trial in high-security prison camps.

China says they are being educated in “vocational training centres” to combat violent religious extremism.

In October, the US National Basketball Association suffered financial losses after an online comment from a team executive prompted a crisis in its relations with China.

As a result, Chinese firms suspended sponsorship and telecast deals.

United Airlines Passenger Allegedly Threatened to ‘Stab Everyone’ After...

Dana Ghazi Mustafa, 27, was charged with assaulting a federal officer. She allegedly admitted that a story told during the flight about her family being killed by a drunken driver had been a lie.
Read more