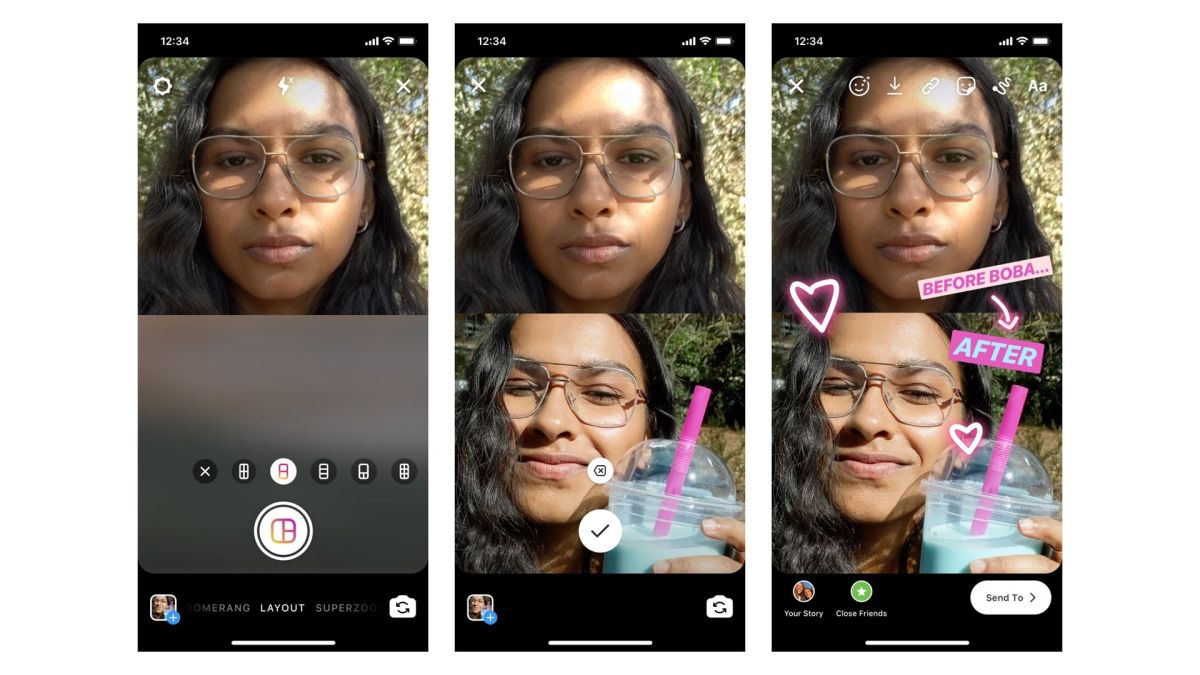 Instagram is finally getting the native support to add multiple images in one Story with the latest update.

Instagram Stories was one of the biggest updates to the platform, and also one that skyrocketed its usage and drove a nail in Snapchat’s coffin. Stories are a way for users to add an image/video that resides on their profile for 24 hours before automatically disappearing.

Strike a pose. And another pose. And then another. 📸 With Layout, you can now capture and share multiple photos in your story — a new, creative way to express yourself. Check it out! pic.twitter.com/j02aYOjsoODecember 17, 2019

Over time, it received a bunch of updates like Highlights, Spotify integration, Polls and other interactive elements, etc. With its latest update, the much-demanded ability to add multiple images at once has been added.

Previously, if users wanted to do that, they would have to go to the gallery, copy an image and paste it over an existing story before uploading it. For Android users, there was no direct way and users would have to resort to third-party apps to create a layout or a collage.

Starting app version 123.0.0.21.114, you can now add multiple images to Stories, so update your app before starting. After that, open your app and go to the screen on the left where you can create stories. On the bottom where you see the shooting modes (will be at “Normal” by default), swipe till you find the “Layout” option.

Once selected, you will see various layout configurations with up to 6 pictures in a single frame. All pictures can either be shot or added from your existing gallery. However, the images can’t be moved or edited, so be sure to plan that beforehand. Once you have your grid filled up, it can directly be added to Stories. Stickers, GIFs and annotations can also be added to the final image.

The update was already available to us in India. In case you don’t have it yet, it should roll out to you in the coming days as this is a staged global rollout. It’s great to see Instagram finally add this long-demanded feature, rendering other apps obsolete.

The Rationing of Care May Lead to Lawsuits Against Doctors. Here is What We Should Do to Protect Them | Opinion

The ex-Vice President is considered more electable than Senator Bernie Sanders, according to figures by Reuters/Ipsos.
Read more

A new study examines the link between drinking tea and lower rates of depression in older Chinese adults, revealing the characteristics of tea drinkers.
Read more

Pompeo: Al Qaeda a ‘shadow’ of its former self,...

The Taliban peace agreement marks a "historic opportunity" to "turn the corner" and make sure the United States is "never attacked again from Afghanistan," Secretary of State Mike Pompeo said Friday.
Read more

Pitino to return for 2020-21 season with Gophers

Richard Pitino will return for his eighth season with the program, a person with knowledge of the situation confirmed on Friday.
Read more