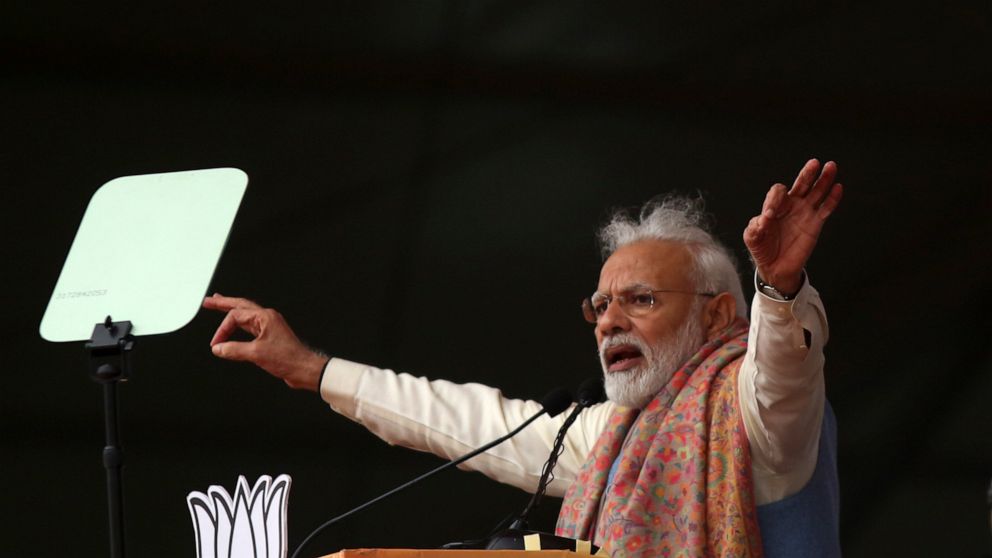 Indias main opposition party will stage a silent protest in the capital on Monday against a contentious new citizenship law, a day after Prime Minister Narendra Modi defended the legislation at a rally in New Delhi and accused the opposition of pushing the country into a fear psychosis.

The protest, led by Congress party chief Sonia Gandhi, comes at a time when tens and thousands of demonstrators have taken to India’s streets to call for the revocation of the law, which critics say is the latest effort by Modis government to marginalize the countrys 200 million Muslims.

“Its not good enough just to feel Indian. At times like these its critical to show that youre Indian & wont allow to be destroyed by hatred, Gandhi tweeted.

Twenty-three people have been killed nationwide since the citizenship law was passed in Parliament earlier this month in protests that represent the first major roadblock for Modis Hindu nationalist agenda since his partys landslide reelection last spring.

Most of the deaths have occurred in the northern state of Uttar Pradesh, where 20% of the states 200 million people are Muslim.

Authorities have so far taken a hard-line approach to quell the protests. They’ve evoked a British colonial-era law banning public gatherings, and internet access has been blocked at times in some states. The Ministry of Information and Broadcasting has asked broadcasters across the country to refrain from using content that could inflame further violence.

Undeterred, protesters have continued to rally throughout the country.

The new law allows Hindus, Christians and other religious minorities who are in India illegally to become citizens if they can show they were persecuted because of their religion in Muslim-majority Bangladesh, Pakistan and Afghanistan. It does not apply to Muslims.

Protests against the law come amid an ongoing crackdown in Muslim-majority Kashmir, the restive Himalayan region stripped of its semi-autonomous status and demoted from a state into a federal territory in August.

The demonstrations also follow a contentious process in Assam meant to weed out foreigners living in the country illegally. Nearly 2 million people, about half Hindu and half Muslim, were excluded from an official list of citizens called the National Register of Citizens, or NRC and have been asked to prove their citizenship or else be considered foreign.

India is building a detention center for some of the tens of thousands of people who the courts are expected to ultimately determine have entered illegally. Modis interior minister, Amit Shah, has pledged to roll out the process nationwide.

On Sunday, Modi denied the existence of a detention center, accusing the Congress party of spreading fear that Indian Muslims would be jailed there. He also contradicted Shah, saying that there had been no discussion yet of whether to execute a nationwide citizens registry.

The protests against the law began in Assam, the center of a decades-old movement against migrants, before spreading to predominantly Muslim universities and then nationwide.

Hungary paying citizens to have babies

A program in Hungary is offering cash to couples for having kids, but the reasoning for it echoes some of Europe's darkest chapters. Jon Wertheim reports on the anti-immigrant motivation to "keep Hungary Hungarian."
Read more

Leak suggests Huawei P40 could have same cameras as...

Photos from the Huawei P40 production line suggest the phone will only have three rear cameras, but we’re not so certain.
Read more

A new report by Just Security indicates the Office of Management and Budget misled -- at best -- about withholding of military aid to Ukraine.
Read more

NBA owner Mark Cuban to Senate: ‘Do your f–king...

Billionaire Mark Cuban knocked two top senators in a tweet on Tuesday, demanding they both reach a compromise on a stimulus package in response to the coronavirus outbreak.Cuban, owner of the Dallas Mavericks, twee...
Read more

The organizers of the Tokyo Olympics reportedly said Thursday that they are not considering cancelling the games based on the coronavirus outbreak.
Read more

Sky broadband down for UK customers – here’s what...

Customers across the south of England unable to access the internet.
Read more