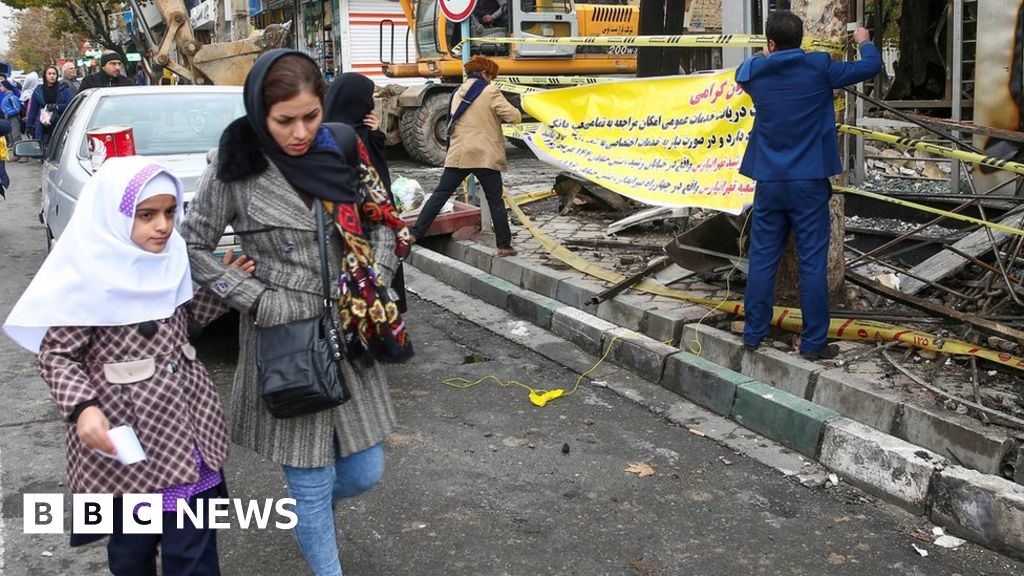 Protests erupted last month after petrol prices were put up

Internet services have been disrupted in parts of Iran amid reports it is being cut off ahead of planned anti-government protests on Thursday.

It comes amid calls for demonstrations in memory of those killed in protests fuelled by price rises last month.

Amnesty International says at least 304 people were killed and thousands arrested during a days-long crackdown by security forces. Reuters news agency put the death toll at about 1,500, based on information from unnamed interior ministry officials.

Protests erupted in cities and towns across Iran on 15 November after the government announced that the price of petrol would rise by 50% to 15,000 rials a litre ($0.12; £0.09 at the unofficial market exchange rate), and that drivers would be allowed to purchase only 60 litres each month before the price rose to 30,000 rials.

The decision was met with widespread anger in a country where the economy is already reeling as a result of US sanctions that were reinstated last year when President Donald Trump abandoned a multilateral nuclear deal with Iran.

As protests escalated, access to the internet was almost completely shut down. Mobile phone footage which eventually reached the outside world appeared to show security forces shooting at unarmed demonstrators.

Relatives of one of those killed, 27-year-old Pouya Bakhtiari, have used social media to call for a ceremony on Thursday to mark 40 days since his death in Karaj, the capital of Alborz province.

Bakhtiari’s family members have reportedly been arrested amid concerns the ceremony could fuel further unrest if it goes ahead.

Japan’s economy just got another $1 trillion shot in...

Japan is injecting another $1 trillion into its economy to protect it from the effects of the coronavirus pandemic.
Read more

One company founder says he hasn't "heard anything at all" about the emergency aid he applied for weeks ago.
Read more

The following is a transcript of an interview with Dr. Christopher Murray, Director for the Institute for Health Metrics and Evaluation (IHME) at the University of Washington, that aired Sunday, May 10, 2020, on "Face the Nation."
Read more

The federal judge weighing the Justice Department's motion to drop its charges against Michael Flynn asked an appeals court on Monday to deny the former national security adviser's effort to get the case dismissed. Lawyers for Judge Emmet G....
Read more

Trucker charged in serial killings faces scrutiny across US

Ex-lovers of Johnny Depp come to his defense in...

A white woman was caught on camera calling the police on an African American man at Central Park in New York City, falsely claiming that he was threatening her life. The man initially asked the woman, Amy Cooper, who he did not know, to leash her dog in an ar…
Read more

What does the next Labour leader think about Scotland?

What do Keir Starmer, Rebecca Long-Bailey, Lisa Nandy and Emily Thornberry have to say about Scotland?
Read more

‘God Friended Me’ Series Finale: Who’s Behind the God...

"God Friended Me" came to an end with an ambiguous finale that revealed the "she" behind the God account on the CBS comedy.
Read more

"If MJ had a grudge with me, let's settle this like men," Grant said Tuesday. "Let's talk about it. Or we can settle it another way."
Read more

‘The Last Dance’ gave us an inside look at...

A doctor didn’t see her kids for weeks after...

As parents grapple with how best to protect their children from the coronavirus, a growing number of medical workers have been temporarily separated from their children after former spouses raised concerns.
Read more