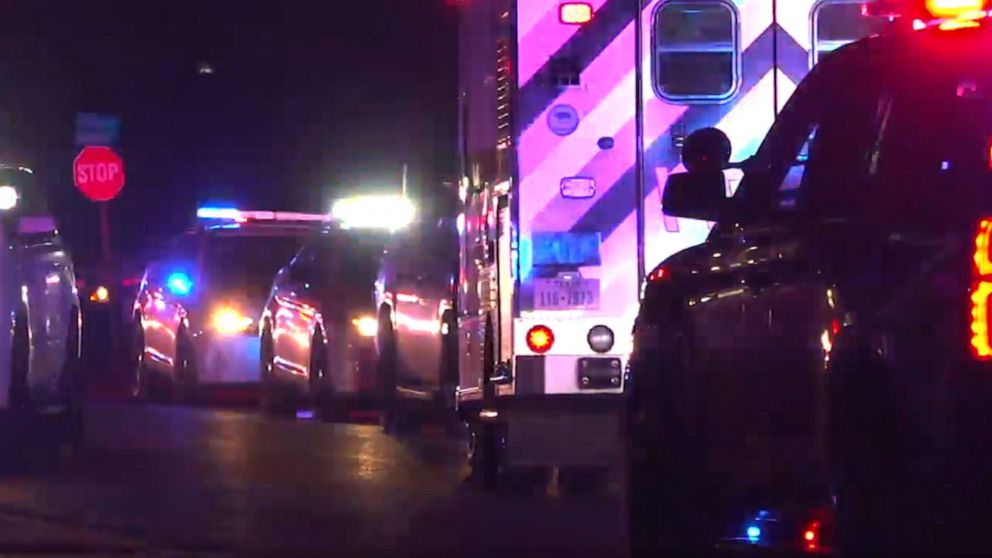 At least two people are dead after Houston police say unknown assailants ambushed a group that was filming a rap music video on Friday night.

At least eight people were shot during the incident, which occurred over several blocks of a residential neighborhood in north Harris County.

The music video was being filmed in the parking lot of an office park by a group of Hispanic males in their 20s, according to Harris County Sheriff Ed Gonzalez.

Two victims were pronounced dead at the scene, and several others were hospitalized.

“We believe they were ambushed by individuals in cars and/or on foot,” Gonzalez said at a press briefing at the scene.

It was unclear whether the group filming the video returned fire, Gonzalez said, but there were a large number of shots fired regardless.

“This is a very serious situation,” he said. “This is a residential neighborhood; a lot of shots were fired, and we have an extensive scene out here stretching several blocks.”

Police were canvassing the area to determine if there were any other victims beyond those shot in the parking lot.

“We don’t know if there was a beef going on, or what exactly happened,” Gonzalez said. “That’ll be part of the investigation.”

Authorities were planning to check all available surveillance footage in the area and review the material that had been filmed for the music video as part of their investigation, Gonzalez said.

Here's a look at the top stories making headlines on the "CBS Weekend News with Major Garrett."
Read more

Proofpoint has discovered several campaigns that use stimulus payments to trick users into giving up financial and credit card information.
Read more

Admiral James Stavridis (Ret.), former Supreme Allied Commander at NATO, member of the Carlyle Group and author of "Sailing True North: Ten Admirals and the Voyage of Character" spoke with Brian Kilmeade and agreed with Chairman of the Joint Chiefs of Staff, …
Read more

“CBS This Morning” anchors mark one year together

The Anglo-Dutch energy giant said its Q1 net income had fallen by 46 percent as the industry grapples with a fall in oil demand driven by the coronavirus pandemic.
Read more

Gaming laptop deals in the latest Dell sale are giving price cuts of up to $450 on the latest G3, G5 and Alienware machines
Read more

Tesla says workers’ unemployment benefits could be impacted if...

Tesla reportedly informed California-based employees on Wednesday that it is ramping up operations this week at its Fremont factory and that furloughed workers' unemployment benefits could be "impacted" if they choose not...
Read more

McConnell: “Good idea” to focus briefings on experts, not...

Biden’s search for a running mate is underway

Giants manager Gabe Kapler says not being able to...

San Francisco Giants manager Gabe Kapler said Tuesday some of the proposed safety protocols to combat the coronavirus in order to start the 2020 season could be a “tremendous challenge.”
Read more

The branch in Sutton, south London is one of a series around England to re-open to customers.
Read more

American boxer Devin Haney has said he is "not a racist" and rejects "discrimination of any kind" after saying that he would "never lose to a white boy".
Read more

Some of European football's most memorable finals have been held in the United Kingdom, but can you remember all 20 stadiums to host one?
Read more

These are the five top SIM only deals this...

Looking for new SIM only deals right now? These are the top plans across a range of categories.
Read more

Survey shows 1 of every 3 Americans knows someone...

Thirty-six percent of Americans say that someone they know outside of their immediate family or work colleagues has been sick with COVID-19, according to a new poll.That number has more than tripled since March, wh...
Read more

Chase Rice says he’ll do next concert differently after...

A country music fan who attended a packed Chase Rice concert over the weekend said she wasn't concerned that people were not wearing masks or social distancing.
Read more

Cory Booker Meets Donor Requirement for Next Democratic Debate, But His Poll...