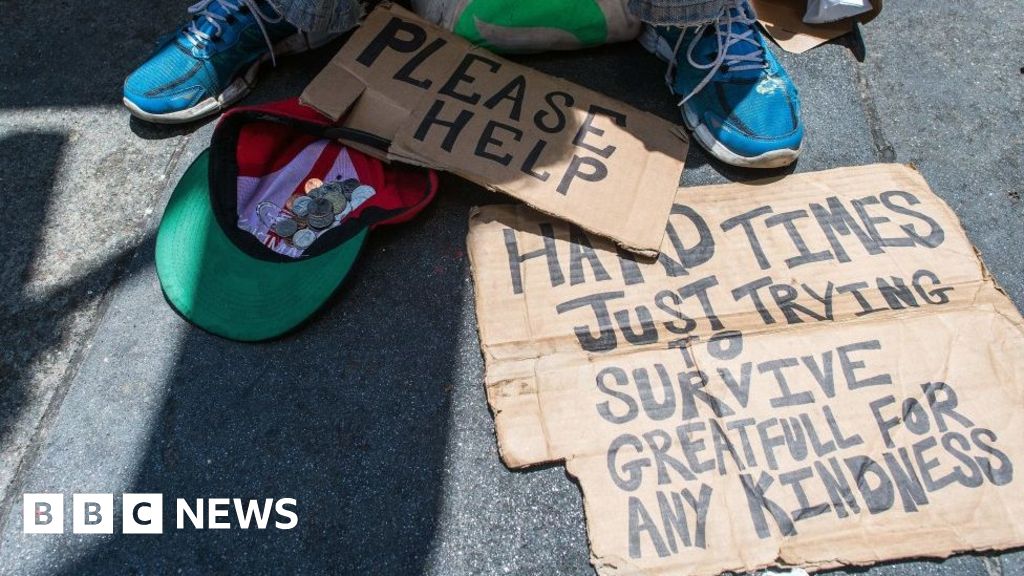 Last year there were 3,434 people experiencing homelessness in Alabama, according to the US Interagency Council on Homelessness

A US police chief has apologised for an “insensitive” Facebook post in which two officers held up a “homeless quilt” made up of signs used for begging.

The officers in Mobile, Alabama, said it was a Christmas message.

The chief of the police force said it did not condone panhandling – a US term for begging.

But he said the Mobile police department did not intend to “make light of those who find themselves in a homeless state”.

In the photo, two officers held up various cardboard signs taped together that showed messages such as “Homeless. Need help,” and “Trying to make it. Anything helps. God bless you.”

One Facebook user reposted the original post with the message: “Imagine taking pride in terrorising the most vulnerable people in society.”

The repost attracted thousands of angry comments, with some calling for the officers to be fired.

The Mobile police department then posted the apology.

“Our position has always been to partner with community service providers to help us help those faced with homelessness with hope to improve their quality of life,” the post said.

Media captionWhat’s it like sleeping rough at Christmas? One man who has experienced homelessness explains

Trump Says U.S. and China Are Fighting Coronavirus Together...

Trump praised Chinese President Xi Jinping on Friday despite having accused China of culpability over the pandemic.
Read more

DJI wants us all to fly free, offers up...

In lockdown? You can still explore the outside with a discounted drone from DJI, and other excellent products from the Osmo range.
Read more

CrowdStrike also reports a surge queries from companies who anticipate employees will work from home over next three months, which increases vulnerability to company data.
Read more

See Elba’s message after getting virus

Actor Idris Elba announced in a Twitter post that he has tested positive for COVID-19.
Read more

Legal marijuana sales are up nationally as people stock up to survive the coronavirus pandemic, according to new data.Sales are spiking in California, Colorado, Nevada, Oregon and Washington,...
Read more

Even with a healthy dose of skepticism, a new book on the towering Frankish king finds he was indeed 'great' in every sense. The post Remembering Charlemagne as Europe Disintegrates appeared first on The American Conservative.
Read more