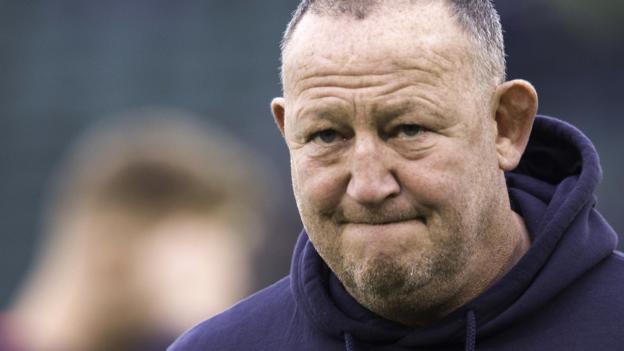 He was charged with misconduct over comments made following their Champions Cup defeat by Exeter 8 December.

An independent hearing upheld the charge and fined Diamond £2,553.

“These comments had the potential to bring the sport of rugby union, the Heineken Champions Cup, and/or EPCR, into disrepute,” an European Professional Club Rugby statement read.

“The committee took into account Steve Diamond’s timely admission of wrongdoing, in addition to his numerous subsequent public comments and apologies to the team of match officials for any offence caused.”

‘Emily in Paris’ Viewers Can’t Stop Mocking the Show, Now Read The Creator’s Defense for All Those Clichés

Biden, under pressure on ‘court packing,’ says he would convene commission on reform

How COVID almost killed a healthy woman with “no...

Research shows the coronavirus may attack the brain more than often than we think, including in young patients who don't get typical symptoms.
Read more

They were confronted by fellow ferry passengers and NYPD officers Saturday night after refusing the captain's orders to either wear a mask or find another way home.
Read more

Cambridge University announced it would cancel in-person lectures for the entire 2020-21 school year in one of the most sweeping measures any international college.
Read more

Angry at the toppling of statues, President Trump wants US heroes honoured in a new national garden.
Read more

Discrimination Against Whites Needs More Attention, Say About Half...

Among white likely voters in Georgia, 77 percent of Republicans say "too much attention" is given to discrimination against Black people.
Read more

The Kennedy Center Honors and Mark Twain Prize will be postponed to 2021 due to the coronavirus pandemic, the Kennedy Center announced Tuesday.The Honors, originally scheduled for Dec. 6, will be held on March 7, a...
Read more

The civil rights icon is being honored in his hometown of Troy, Alabama on Saturday.
Read more

The Department of Justice (DOJ) on Wednesday rolled out a proposal for Congress to revise the law that gives tech companies a legal liability shield for content posted by third parties.Section 230 of the Communicat...
Read more

What We Know About George Floyd’s Death So Far

Census Bureau intends to wrap up count on Oct....

The Census Bureau announced on Monday that it intends to wrap up its count on Oct. 5, despite a judge's order to continue the census through the end of October.Commerce Secretary Wilbur Ross decl...
Read more

The Trump administration has imposed new restrictions on Huawei. The rules prevent foreign semiconductor producers from selling chips to the Chinese tech company, which it needs to make phones. Isaac Stone Fish, a CBSN contributor and senior fellow at the Asi…
Read more

Trump predicts US will have coronavirus vaccine by year’s...

President Trump said Sunday that his administration is confident the United States will have a vaccine for the novel coronavirus by the end of the year.
Read more

The Air Force is now flying B-1B bombers and Global Hawk spy drones over the South China Sea and other areas within the Pacific theater as part of a broader strategy to sustain surveillance and deterrence missions in the region, following the increased U.S.-C…
Read more

Sony’s new 4K TVs have some premium features, but...

Many new Sony TVs come with Surface Multi-Audio, but budding buyers may not clock the missing features on smaller TV sizes.
Read more

Amid Its Covid-19 Crisis, China Was Still Hacking Uighurs’...

Today, Tokyo Disneyland announced that new attractions, restaurants, and shops will open on September 28 marking the largest expansion of the Park’s history. This large-scale development will stretch across Fantasyland, Tomorrowland and Toontown – three of th…
Read more

Investigators have been closely examining video evidence, and say the critical moment is when the shots are fired.
Read more

How Trump Can Win the First Debate | Opinion

The president needs to consistently reinforce that Joe Biden is the real Washington insider. In a sense, Biden's an incumbent four years removed.
Read more

Kubrat Pulev warns Anthony Joshua he will not step...

Kubrat Pulev warns Anthony Joshua he will not step aside so a bout with Tyson Fury for all four world heavyweigh titles can take place.
Read more

A search of a house in Londonderry has also been conducted, police say.
Read more

The head of Instagram on Tuesday warned that the Trump administration’s push to ban the Chinese-owned app TikTok could set a precedent leading to global bans of U.S.-based social media companies, including Instagram and its parent company...
Read more

McEnany Says ‘Come Work at the White House’ If...

"I'm not going to give you a readout of what our health care plan looks like and who's working on it," the White House press secretary told reporters.
Read more

News outlets not traveling with Trump over COVID-19 concerns

Several media outlets decided not to travel on Air Force One with President Trump as he left for the campaign trail, citing concerns over his recent contraction of COVID-19, despite him being medically cleared by his physician to return.
Read more

Arrests made at Hong Kong protest a year after...

India and Pakistan Clash on Border As China Conflict...

India and Pakistan accused one another of launching "unprovoked" aggressions in statements sent to Newsweek, while yet another standoff involving China kept the region on edge.
Read more

A report from Hong Kong provides the first credible evidence that it's possible to catch the virus twice. Some immunologists are breathing a sigh of relief.
Read more

Fox parts ways with host who showed up to...

Fox News parted ways with a host who had shown up to work visibly sick in mid-March, a spokesperson confirmed to The Hill Thursday.Heather Childers, who hosted "Fox & Friends First," the firs...
Read more