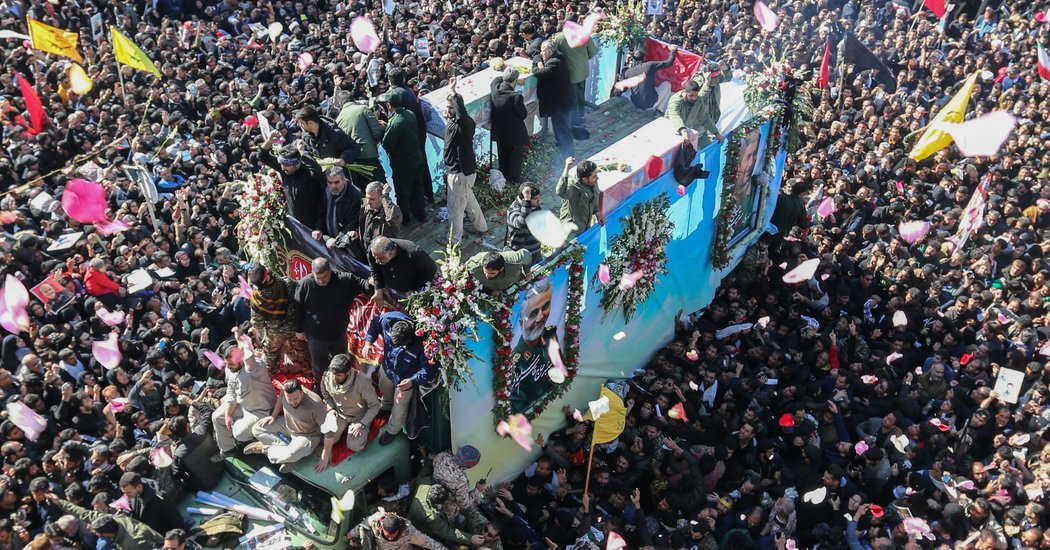 In a fiery speech made moments before Maj. Gen. Qassim Suleimani was buried in his hometown, the leader of Irans Islamic Revolutionary Guards Corps vowed to set ablaze places where Americans and their allies live.

We will take revenge; a revenge that will be tough, strong, decisive and finishing and will make them regret, the paramilitary groups leader, Hossein Salami, said Tuesday in a front of a crowd of mourners. We will set ablaze the place they like, and they know where it is.

Today, the seeds of hatred for the U.S. have been sown in the hearts of Muslims, he said, according to Fars, the state news agency.

The pledge to seek vengeance echoed the rhetoric of many of the countrys leaders since General Suleimanis killing on Friday.Death to Israel, the crowd chanted back, according to news reports. Israel, a close ally of the United States, has long been an enemy of Iran.

Thousands of mourners, dressed in black and carrying photos of General Suleimani, crowded the central square of Kerman, where the generals body was taken for burial after a funeral procession Monday in Tehran, the capital.

Before arriving in Kerman, the generals remains were taken to the holy city of Qom, where thousands of residents came out, hoping for a chance to touch the coffin of a man the state has declared a martyr.

On Monday, Ayatollah Khamenei wept and offered prayers over General Suleimanis coffin at the massive state funeral. The ayatollah had a close relationship with the general, who was widely considered to be the second most powerful man in Iran.

The letter to the spy agency raises concerns that the board was inappropriately weighted toward the rich and well-connected.
Read more

Zoom banned for official use in Taiwan

Government agencies advised to use competitor products from the likes of Google and Microsoft.
Read more

President Trump touted the development of an "AIDS vaccine" on Tuesday as he predicted that scientists will create a vaccine for the coronavirus by the end of the year. An AIDS vaccine does not y...
Read more

How CJ Hendry used Instagram to make millions from...

The Australian-born artist is part of a new wave of self-made Instagram artists who have crashed their way into the art world via the internet.
Read more

Care inspectors made an unannounced visit to Home Farm, where seven residents have died after a Covid-19 outbreak.
Read more

The pro wrestling world lost one of its best. Shad Gaspard, 39, died after being caught in a riptide in California and telling lifeguards to save his son.
Read more

Boris Johnson ‘improving and sitting up in bed’

Canon EOS R6 could include huge video upgrade with...

Rumors suggest the upcoming 'entry-level' Canon EOS R6 will not only be a speedster but a video powerhouse a well.
Read more