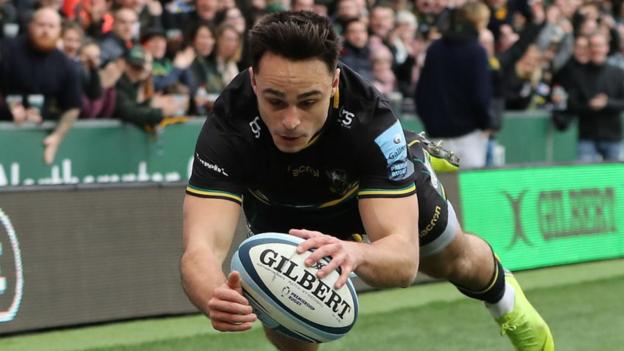 Northampton winger Tom Collins has been banned for two weeks for his aerial challenge on Jacob Umaga in Saturday’s 13-man win against Wasps.

Collins, who injured both himself and Umaga in the 65th-minute incident, was shown a red card by referee Matthew Carley at the Ricoh Arena after having lengthy treatment.

But an independent disciplinary panel deemed it worthy of further punishment.

They host Benetton this Sunday at Franklin’s Gardens before the visit to France to face Lyon the following Saturday.

Collins’ offence was for ‘tackling the jumper in the air, contrary to World Rugby Law 9.17’.

Independent panel chair Matthew Weaver said: “The player’s actions were reckless in that he failed in his duty to protect the player in the air. They accepted that there was no intent to cause any harm and the player was immediately remorseful for the injury sustained by Jacob Umaga.

“The panel found that this [offence] was a low-end entry point of four weeks and that the player was allowed the maximum mitigation of 50% due to his acceptance of the charge, his clean record and immediate and genuine remorse.”

Test maker targeted by FDA says it responded to...

A company targeted by the Food and Drug Administration for selling unauthorized coronavirus antibody tests says it has responded to U.S. regulators' concerns
Read more

A List of Every Celebrity Who Has Stepped Out...

Ariana Grande, Nick Cannon, Timothée Chalamet and serval other celebrities were spotted protesting the death of George Floyd over the weekend.
Read more

Oregon State Police said an officer who made an "okay" gesture during a Saturday protest was checking on a man who had been pushed to the ground and was not making a white power sign. Police ...
Read more

Police begin to piece together Danielle’s whereabouts on the day she went missing.
Read more

U.S. health officials have quietly released more reopening guidance that was created more than a month ago but initially shelved
Read more

Serie A aims for 13 June restart subject to...

Serie A plans to resume its season on 13 June, subject to government approval, after the break during the coronavirus pandemic.
Read more

Coronavirus: ‘I made a ventilator from a coffee machine’

Businessman Ross Hunter has reached the finals of a global challenge to create a low-cost ventilator.
Read more

What is Microsoft Teams? How it works, tips and...

Seattle city attorney says some cases against protesters could...

Nick Wright and Kevin Wildes are joined by Brian Westbrook to talk the Dallas Cowboys, and whether they believe a deal will be worked out with their quarterback Dak Prescott before the July 15th deadline. Dak reportedly asked for north of $45M for the 5th yea…
Read more

A Pakastani-American former police officer in Asbury Park, N.J., filed a lawsuit against his police department claiming he was wrongfully terminated and faced discrimination during his over 15-year tenure.The...
Read more

The chairmen of two key committees on Friday urged House leadership to include a provision in the next coronavirus relief package that would create an independent bipartisan commission to review the federal government's h...
Read more

The recalled salad is contaminated with cyclospora​, a parasite that can cause diarrhea, stomach cramps, nausea, and fatigue.
Read more

Trump on Twitter mocks Biden for wearing a face...

"I thought it was very unusual he had one on," the president said when asked about his tweet.
Read more

Defenseman Scott Perunovich, one of the best players in college hockey the last three seasons, is under contract with the St. Louis Blues.
Read more

The head of the Centers for Disease Control and Prevention (CDC) said Tuesday that he believes the U.S. is ready to begin reopening, even as he acknowledged the need to invest further in the nation's public health infrast...
Read more

Texas to loosen restrictions on malls, movie theaters in...

Gov. Greg Abbott will let a range of businesses start reopening but not salons, barber shops or gyms.
Read more

President Trump on Wednesday lashed out at New York City Mayor Bill de Blasio (D) for moving ahead with plans to paint "Black Lives Matter" along Fifth Avenue in Manhattan, calling the mural a "symbol of hate."Trum...
Read more

Joe Biden is the Only Candidate Fit to Contest Trump in What...