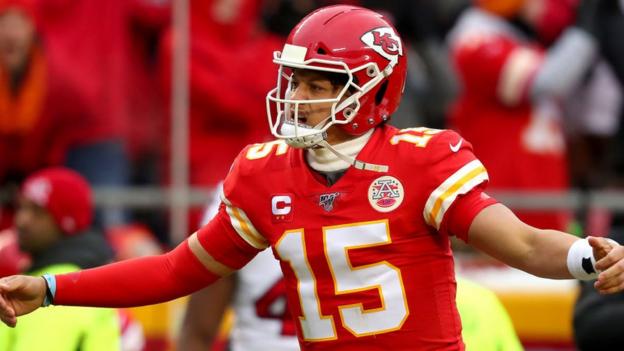 The Kansas City Chiefs staged a thrilling comeback from 24-0 down to beat the Houston Texans 51-31 to advance to the AFC Championship game.

Kansas scored 41 unanswered points and dominated the second half.

The second seeds now host the Tennessee Titans, who beat the Baltimore Ravens in the other AFC divisional game, for a place at Super Bowl 54.

“We didn’t start the way we wanted to – we just had to keep fighting, just go one play at a time,” quarterback Mahomes said.

“We know the Titans are a tough team we will have to play our best and find a way to win.”

On team-mate Travis Kelce, who he passed to for three touchdowns despite the tight end struggling with a hamstring injury, Mahomes said: “Travis was amazing, man he’s a monster.

“The way he came through injury and was still making plays all day long – he’s a special football player.”

Texans quarterback Deshaun Watson connected with Kenny Stills and Darren Fells and Lonnie Johnson ran in a blocked punt as the visitors raced into a 21-point first-quarter-lead.

But a Damien Williams touchdown five minutes into the second quarter sparked a Chiefs resurgence, with Mahomes finishing with five touchdown passes, 321 passing and 56 rushing yards.

The Texans stopped the rot with the Chiefs leading 41-24 in the third quarter as Watson scored a five-yard rushing touchdown to get the margin within 10.

But the Chiefs extended their lead, Blake Bell adding another touchdown, to leave them one game away from their first Super Bowl appearance since 1970.

Ronan Farrow responded Monday to a critical column by New York Times media critic Ben Smith, stating he stands by his reporting after the columnist described the Pulitzer winner's journalism as a "dangerous approach."...
Read more

Confirmed cases among plant employees went from 120 to 245 in four days and saw a sixth employee die after contracting the disease.
Read more

Burmeister, who coached UTSA to NCAA tourney, dies at...

Ken Burmeister, a college basketball coach for 21 seasons who took Texas-San Antonio to the NCAA Tournament and later guided Loyola of Chicago, died Tuesday. He was 72.
Read more

"This gives law enforcement an additional tool to prevent the lawlessness we've seen here and in cities nationwide. Police will be equipped to make arrests of individuals who are planning to riot, loot or cause damage and unrest," Governor Doug Ducey wrote in…
Read more

The four million Americans that are eligible to receive the economic impact payments will get a debit card in the mail containing the funds that can be used for groceries, gas and online shopping.
Read more

Serie A aims for 13 June restart subject to...

Serie A plans to resume its season on 13 June, subject to government approval, after the break during the coronavirus pandemic.
Read more

The National Governors Association has released a guide for governors to help them determine how to lead their states to recovery amid the coronavirus pandemic and ensuing economic crisis.
Read more

Another company from the tech world is trying to help fight the COVID-19 outbreak.
Read more

GMA’s Robin Roberts to work from home amid coronavirus...

The Susan Rice email isn’t any sort of smoking...

A limited number of NFL teams are reopening their training facilities Tuesday, while many are prohibited by government restrictions during the pandemic.
Read more

China silent amid global calls to give Africa debt...

Some officials worked to justify the president’s decision to take hydroxychloroquine, while other aides debated whether they needed to update government guidelines about the drug.
Read more

The entrepreneur is a point ahead of Buttigieg on favorability, but still two places behind the mayor when Democratic voters are asked who they'll back.
Read more

Firefighters see hope in battling Australia wildfires as temperatures are set to...