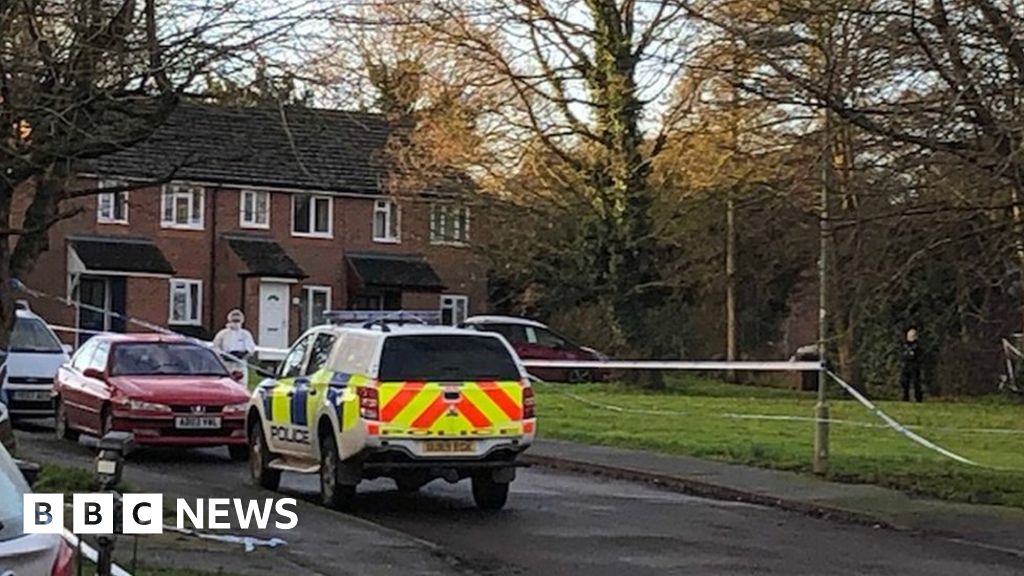 Forensics officers were seen in Mendip Heights following the attack

Three teenagers have been charged with murdering a man who was stabbed to death in a brawl.

Police were called to Mendip Heights in Didcot at about 03:45 GMT on Thursday where three men were found injured.

One of them, in his 40s, suffered multiple stab wounds and was later pronounced dead in hospital.

Taison Cyrille, 18, Isaac Boyland, 19, and Brookton Lagan, 18, have been charged with his murder and will appear at Oxford Magistrates’ Court on Monday.

Lagan, of Robin Way in Didcot, Cyrille, of Market End Way in Bicester, and Boyland, of Marlborough Road in Oxford, have also been charged with two counts of causing grievous bodily harm.

A post mortem revealed the man died from a stab wound to the chest, Thames Valley Police said.

The two other victims, one in his 20s and the other in his 30s, were also taken to hospital but have since been discharged.

A 16-year-old boy from Milton Keynes, who was also arrested, has been released without charge.

The NHL and NHL Players' Association gave the go-ahead Thursday for teams to open training camp on July 10.
Read more

Trump lashes out at GM, Ford over ventilators

President Trump on Friday lashed out at General Motors and Ford, demanding via tweet that the two major automakers begin churning out ventilators to be used to treat patients with the coronavirus.Trump issued a seq...
Read more

"I'd really encourage people to think about that if you're an employer and in a position to do so," New Zealand's prime minister said.
Read more

Former NFL running back Darren McFadden was involved in a dramatic standoff with police when he was arrested in Texas in January 2019, a newly released video showed.
Read more

Emily Jones was at a park with her parents on Mother's Day when she was fatally stabbed.
Read more

Inside an ‘army’ of COVID-19 contact tracers in Massachusetts

"Every call is a chance to halt the virus in its tracks," said one worker on the virtual front lines of the state's effort to curb the spread of the virus.
Read more

Florence And The Machine To Deliver At-Home Performance For...

This evening (May 4) should have been the Met Gala, fashion's biggest night of the year, when dozens of Hollywood's biggest names bring their finest to the Metropolitan Museum of Art in New York to toast the opening of the Costume Institute's newest exhibit. …
Read more

Sky broadband down for UK customers – here’s what...

Customers across the south of England unable to access the internet.
Read more

Mike Pence Says ‘We’re Past the Peak’ of Coronavirus...

The head of the White House coronavirus task force told The Wall Street Journal that he was encouraged by a decrease in cases in major metropolitan areas.
Read more

Australia drops 4,000 pounds of food to save starving wildlife