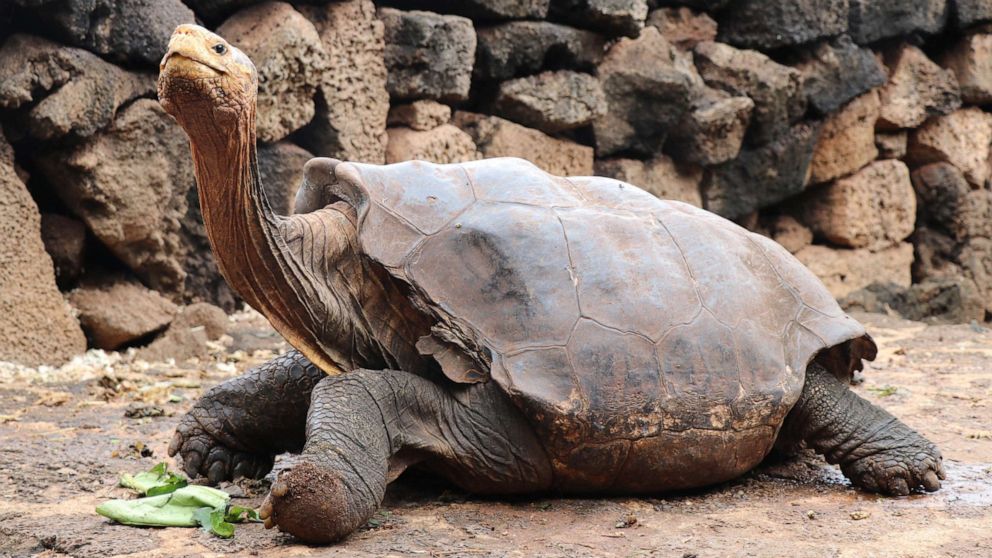 A Galapagos giant tortoise estimated to be about 130 years old is returning home after having so much sex that he saved his species.

Diego, part of the Chelonoidis hoodensis species that lives on the Galapagos island of Espanola, was one of the tortoises brought to the U.S. between 1928 and 1933 and was later placed into the Charles Darwin Research Station for protection after the species was declared critically endangered in the 1960s, according to the San Diego Zoo.

Diego spent 30 years at the San Diego Zoo’s breeding program before he returned back to Ecuador in 1977, joining his fellow tortoises at the Charles Darwin Research Station.

Ecuadors Environmental Ministry announced Friday that it decided to end the 40-year captive breeding program on Espanola Island, demonstrating the recovery of habitat conditions and of the tortoise population, according to the Galapagos Conservancy.

The population went from 15 to 2,000 tortoises due to the program, according to the conservancy. As many as 40% of the current population of tortoises are thought to be descendants of Diego, San Diego Zoo officials said.

The management program is also about to implement ecological restoration of the island, which includes the eradication of introduced species and the regeneration of cacti.The island’s ecosystems are currently adequate to support the growing population of tortoises, the conservancy said.

Closing the breeding program will include the return of the 15 original adults — 12 females and two males — originally found on the island, who will then be released in their natural habitat in March after a quarantine period to eliminate risks of seed dispersal from plants that are not typical of the island.

The species is still listed as critically endangered on the International Union for Conservation of Nature’s Red List.

The Susan Rice email isn’t any sort of smoking...

National Basketball Association (NBA) owners on Thursday approved a tentative plan to resume the season after it was suspended in March due to the coronavirus pandemic.Under the plan, the season will resume with 22...
Read more

Pence staff threatens action against reporter who tweeted about...

Ossoff just short of 50% threshold for US Senate...

Media executive Jon Ossoff is just short of the 50% threshold of votes he needs to avoid a runoff election in Georgia's Democratic primary for U.S. Senate
Read more

The recent seizure by Cuban police of hundreds of sacks of onions was a big news item on state television, a warning to suspected hoarders and speculators who seek to benefit from harsher economic conditions during the pandemic
Read more

Senate Minority Leader Chuck Schumer on Wednesday failed to pass a resolution by unanimous consent that called for the Centers for Disease Control and Prevention to immediately release its guidance on reopening the economy.
Read more

A Democratic congressman wants to know what Republican Gov. Doug Ducey plans to do to address a recent surge in new coronavirus cases as the state becomes a hotspot
Read more

Lin Miranda doc postponed out of solidarity with protesters

Just two days before it was to begin streaming, “We Are Freestyle Love Supreme,” a documentary about the improv group with Lin-Manuel Miranda and friends, has postponed its release out of solidarity with protesters
Read more

Biden says MLK assassination ‘did not have the worldwide...

Joe Biden on Thursday compared the death of George Floyd to the assassination of Martin Luther King Jr. in 1968, saying Floyd’s death had a bigger global "impact" than King’s.
Read more

The incident occured in the city of Santee, which has an infamous history of racially motivated attacks and white supremacist activity.
Read more

The Indonesian government has postponed Sept. 23 regional elections until at least December because of the coronavirus pandemic
Read more

Trump to ABC’s Muir: ‘It’s possible there will be...

McConnell on Burisma, Biden probe: ‘I think it’s worth...

Senate Majority Leader Mitch McConnell (R-Ky.) is signaling support for a probe into Hunter Biden and Ukraine gas company Burisma Holdings."I think it's worth taking a look at," McConnell told Fox News during an in...
Read more

"To say we are living in unusual times is an understatement," Lindsey Graham said in a statement Thursday.
Read more

Defund the Police: What It Means and How It...

In the wake of George Floyd’s death, protesters across the country are calling on officials to defund the police. WSJ’s Shelby Holliday examines what the phrase means and how it might work. Photo: Ragan Clark / Associated Press
Read more

President Trump said he struggled to watch the entire video of George Floyd's arrest and death at the hands of police, which sparked nationwide protests against policy brutality and systemic racism."The George Floy...
Read more

The PM will be questioned by the Liaison Committee as critics call for his chief adviser to resign.
Read more