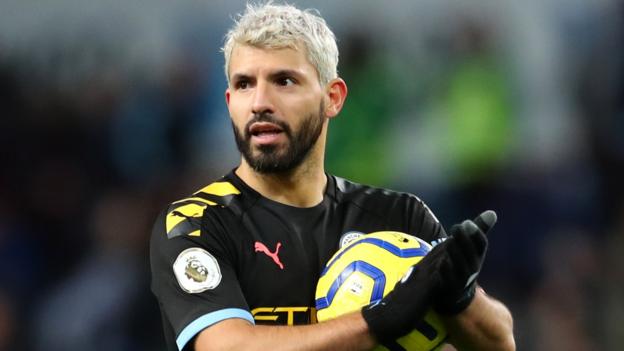 “He is a legend,” added Guardiola.

Aguero scored City’s third, fifth and sixth goals – as well assisting Riyad Mahrez for the opener – as Guardiola’s side demolished Villa to move above Leicester into second in the table.

Aguero’s contract ends in 2021 but Guardiola has not given up hope the striker, who joined from Atletico Madrid in July 2011 for £40m, will sign a new deal.

“It depends on him, it is his decision,” said Guardiola.

“This kind of player… there are many in the incredible history of English football. He helps to make the Premier League better.”

His treble against Villa was his 12th hat-trick, a Premier League record.

Guardiola described Aguero as the second best striker in the world behind his fellow Argentina forward Lionel Messi, who the Spaniard managed at Barcelona.

He added: “The best is Messi.

A tumultuous year-long race to Iowa culminates in Monday’s...

2020 presidential candidates have sharpened their attacks in attempt to win over Iowa caucus-goers.
Read more

The former Love Island host was due to stand trial accused of assaulting her boyfriend.
Read more

A plaintiff’s attorney says billionaire Alki David has been hit with more than $58 million in damages after a jury found him liable for battery, sexual battery and sexual harassment against a former employee
Read more

A Japanese warship has departed for the Middle East to ensure the safety of the country's oil tankers in waters where tensions between the U.S. and Iran are high
Read more

Senate Democrat on impeachment trial: ‘If you have a...