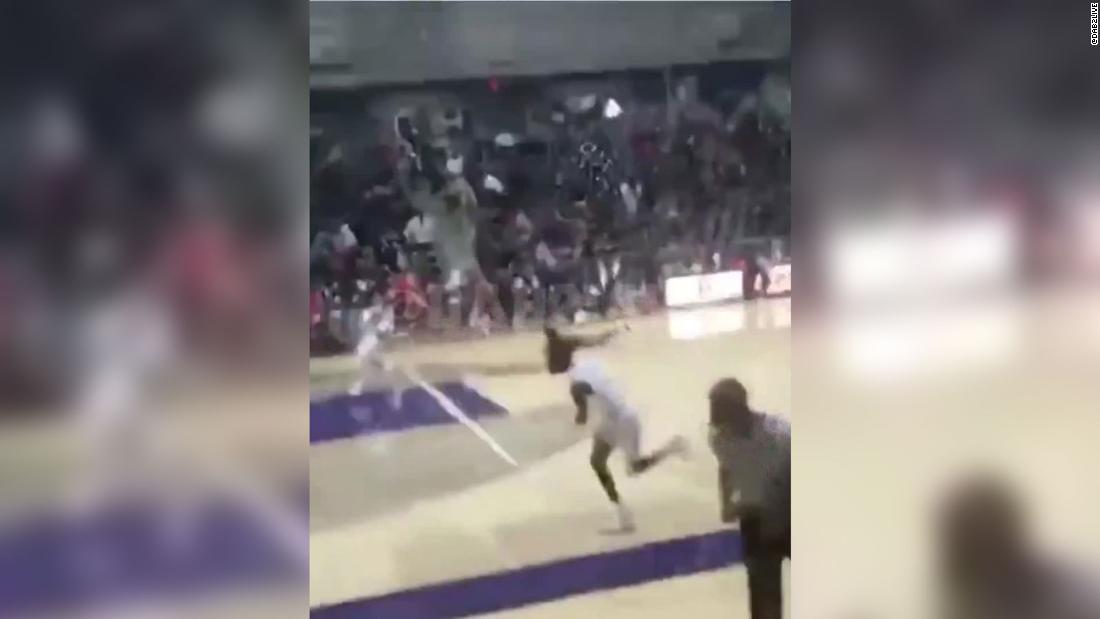 An 18-year-old male was shot during the game after a fight broke out inside the Davis Field House around 9:10 p.m., according to a press release from the Dallas Police Department. He was transported to a local hospital where he remained in critical condition Sunday night.

On Sunday, a 15-year-old male turned himself into the police and was charged with aggravated assault, according to police. Two other juveniles have been identified as persons of interest but will not be charged, the release said.

Both teachers and students were concerned with the violence that occurred at a school game.

“I was in shock that it got that far,” Brown said. “I didn’t think it would get that far at a game,” the affiliate reported.

“It’s extremely concerning because I taught a lot of the students who play basketball for South Oak Cliff,” Shareefah Mason, a teacher with the Dallas Independent School District, told KTVT. “I have lost many students to prison as well as to death, and it is very alarming when you’re pouring out all your passions in the classroom to teach the students only to see them not make it to21 years old.”

Dramatic video taken from inside the game shows people running off of the court and rushing out of the stands after gun shots are heard. Dallas Police spokesman Demarquis Black tells CNN that video is part of their investigation.

CNN’s Jeremy Grisham and Jeremy Nash contributed to this report.

NASA astronaut to cast her ballot 200 miles above Earth

A former police officer in Arlington, Texas, who fatally shot a woman as he was aiming for her dog was indicted on a charge of criminally negligent homicide.
Read more

Government employees: What public records should we request as...

CNN has been filing dozens of records request with local, state and federal government agencies to gain insight into the country's response to the coronavirus.
Read more

President Trump's move to close the Chinese consulate in Houston, Texas, is the latest escalation between Washington and Beijing, whose relations have spiraled at a dizzying pace since March as the novel coronavirus pande...
Read more

If you're looking for new ways to enjoy your favorite seasonal produce, here are seven easy and delicious summer recipes that are loaded with health benefits. Chances are, they're not only a treat for your taste buds -- your kids might enjoy them, too.
Read more

Hundreds of millions of smart devices at risk of...

Host of vulnerabilities discovered in 20-year-old code - and your smart home devices could be at risk.
Read more

The University of California (UC) announced Michael V. Drake as the new president of the university system in a meeting on Tuesday.
Read more

Biden and Trump Are Neck and Neck in Florida,...

According to the poll, among all registered voters, Trump holds a one-point lead, as 48 percent said they'd vote for him, compared to 47 percent that sided with the former vice president.
Read more

New York Gov. Andrew Cuomo (D) announced Thursday that a statewide moratorium on evictions would be extended through August 20 due to the coronavirus pandemic.The state on March 20 temporarily prohibited residentia...
Read more

Robert Ringo was airlifted to a hospital after being spotted by searchers. He says he was in excruciating pain, but lived on water he brought with him and berries.
Read more

Democrats on the House Oversight Committee are threatening to subpoena if officials from the Pentagon and State Department do not testify at a hearing next month on the administration's Afghanistan strategy.In a Mo...
Read more

What to wear: Feds’ mixed messages on masks sow...

Millions of villagers were evacuated as the powerful cyclone approached the eastern Indian states of Odisha and West Bengal.
Read more

Neil Lennon has "nothing but praise" for Leigh Griffiths after the Celtic striker improved his fitness while his team-mates were on camp in France.
Read more

Jayce Tingler goes over Padres performance in win over...

RIP handshakes. But the world has plenty of touchless...

Dr. Anthony Fauci has declared the handshake dead. All that close physical contact is just not what you want when there's a respiratory-borne pandemic going around.
Read more

Reflections on the contributions of John Lewis – a...

No one deserves a much-needed rest more than John Robert Lewis - and now we must follow his example and take up the baton to help finish what he started so long ago in Troy, Alabama and at the side of Martin Luther King J...
Read more

After attacking Dominik Dijakovic last week on NXT, Karrion Kross takes him on in the main event looking to get closer to a shot at Keith Lee's NXT Championship.
Read more

The governor of a southern Italian region is insisting that the Bulgarian farm workers who live in an apartment complex with dozens of COVID-19 cases stay inside for 15 days, not even emerging for food
Read more

CNN's Sara Sidner has covered armed conflict in countries all over the world. The devastation brought by Covid-19 is a different kind of fight, but it's a battle nonetheless -- and it's one being fought disproportionately by those already up against another o…
Read more

A teenager and two men were held in London, while another man was arrested in Leicestershire.
Read more

Lebanese hold raucous rally outside US Embassy in Beirut

Dozens of Lebanese protesters have held a raucous, pro-Hezbollah rally outside the fortified U.S. Embassy in Beirut denouncing what they said was Washington’s interference in Lebanon's affairs
Read more

Some people defended the term, saying its a common sports term for an underdog victory, while others said that Zendaya was anything but an underdog for anyone who watched "Euphoria."
Read more