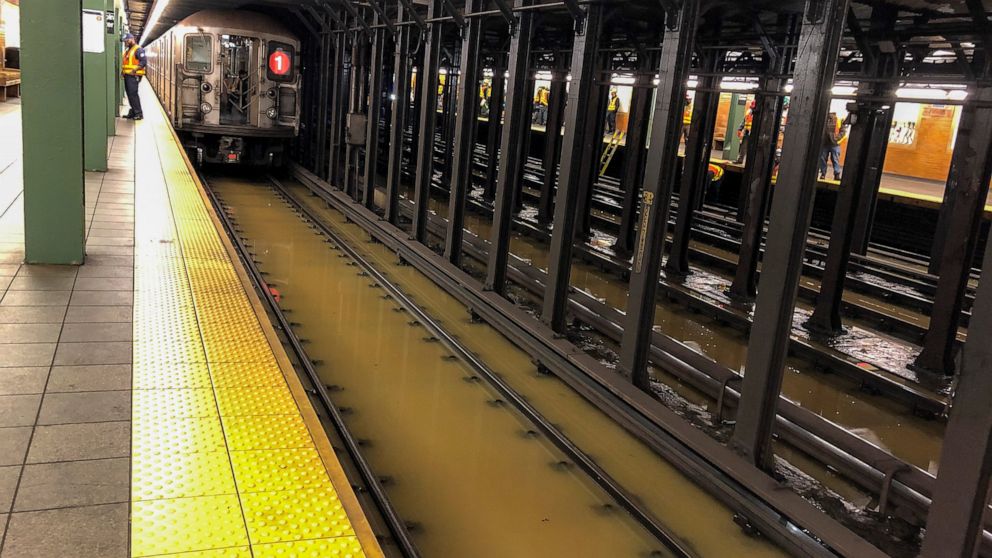 The Fire Department of New York responded to the flooding around 5 a.m. near Broadway and West 62nd Street. The water spread for blocks and was several inches deep in places.

Its crazy, you need a boat or something to get through. I didnt end wear boots today and now we got all this,” commuter Michael Romero, 27, of the Bronx told the New York Post.

Abigail Marie, 33, of Manhattan, said city workers and firefighters responded quickly after the streets started flooding a lot and from all directions.

You have to be careful, theres big puddles around and theyre deeper than they seem, she told the Post.

The Metropolitan Transportation Authority reported delays on the 1, 2 and 3 subway lines.

Can online shows help save the theater industry?

From West End musicals in London to live productions at the Edinburgh Festival, the performing arts industry contributes £5.4 billion ($6.7 billion) a year to the UK economy. But many venues are not planning to reopen until December at the earliest, and the e…
Read more

The suspension has sparked debate on Twitter as users discuss whether the NYT's decision is fair.
Read more

Save the jam for the doughnut filling.
Read more

Trump predicts US will have coronavirus vaccine by year’s...

President Trump said Sunday that his administration is confident the United States will have a vaccine for the novel coronavirus by the end of the year.
Read more

Kendall Roy’s Cringe-Inducing Rap from ‘Succession’ Has Officially Been...

Relive the embarrassment over and over again with the studio version of Kendall Roy's now-infamous rap by composer Nicholas Britell.
Read more

When Christopher Boddy was 14 years old, he'd log onto his computer after school to spend hours playing a game that taught him the basics of digital forensics, ethical hacking and cryptography.
Read more

Family of Lori Vallow defend her innocence in missing...

Lori Vallow’s mother and sister are publicly defending the Idaho mom for the first time in the midst of a high-profile missing children case. Vallow is charged with the apparent disappearance of her children, Tylee and JJ, who have not been seen in months. He…
Read more

New York City auctioned off extra ventilators due to...

New York City auctioned off hundreds of city-owned ventilators at least five years ago under Democratic Mayor Bill de Blasio's administration, according to an...
Read more

The head of the Environment Agency says new buildings should be made more resilient to flooding.
Read more

"Cheap Thrills" singer Sia opened up about motherhood and revealed that she adopted two teenage boys who were aging out of foster care.
Read more