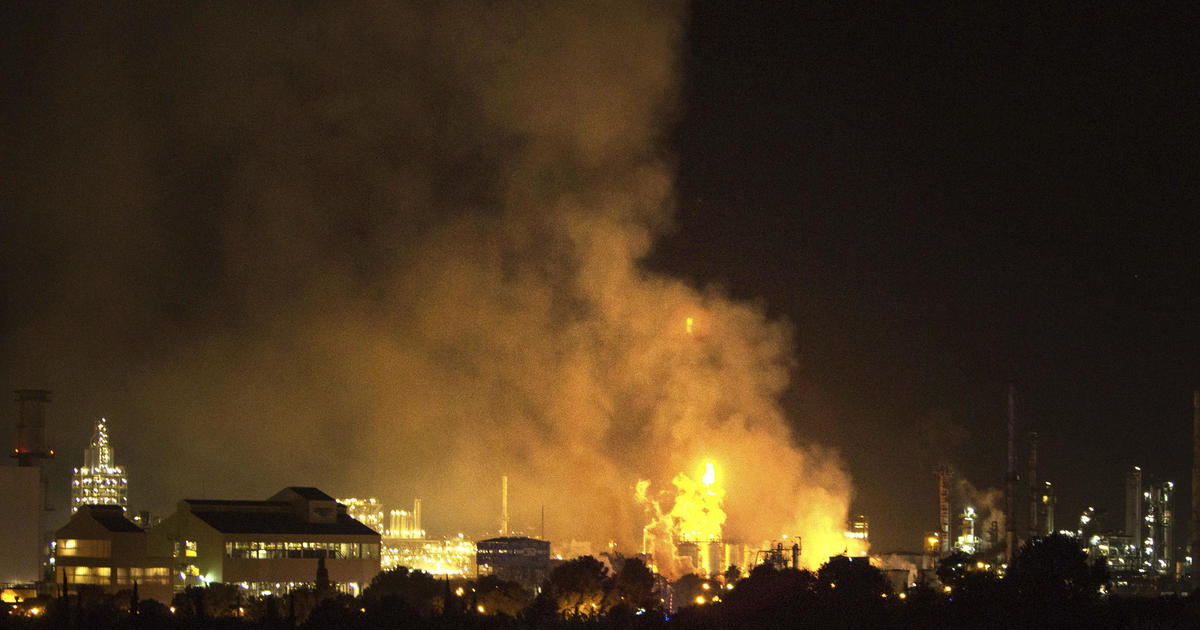 A massive explosion at a petrochemical plant in northeastern Spain killed one person and gravely injured at least six others Tuesday, regional authorities said. One person remains missing.

A local government spokesman for the port city of Tarragona, where the plant is located, said a preliminary investigation indicated the force of the blast killed an individual in a nearby neighborhood.

The spokesman said he had no further details. He spoke on condition of anonymity in keeping with City Hall regulations.

The civil protection agency in the Catalonia region called the blast a “chemical accident” and warned people in parts of the city of 800,000 and in nearby towns to refrain from going outside as a precaution. Emergency services said that two of the injured were being treated for major burns.

Buch said the smoke from the resulting fire was not toxic but he also advised residents to remain inside.

Smoke rises following a major explosion at an industrial hub near the port city of Tarragona, Spain.

The blast took place on the premises of Iqoxe, according to a woman who answered the phone at the company and who quickly hung up the phone without giving her name.

According to the company’s website, Iqoxe is Spain’s sole producer of ethylene oxide, a chemical compound used for making detergents, solvents and other products, as well as ethylene glycol, one of the main raw materials in the production of plastics.

Local residents posted videos showing the aftermath of the blast, with flames and a big column of black smoke emerging from an area dotted with large industrial tanks.

Some local residents told Tarragona Radio that the blast could be heard from miles away.

Since 2015, the city has housed a 2,965-acre “chemical hub,” ChemMed, that was described as the largest of its kind in southern Europe.

The government said Prime Minister Pedro Sánchez had been in contact with the regional president of Catalonia, Quim Torra, to inquire about the blast and offer any help needed.

Tuesday’s explosion comes just over a month after a December 11 blaze at a solvent and industrial residues recycling plant in the northeastern town of Montornes del Valles. After that blast, which caused no casualties, authorities had to cordon off an area of some 550 yards in radius around the plant.

"I knew I loved you the moment I met you," the pop star wrote to her new fiancé. "I've never felt so unconditionally loved by someone in my life."
Read more

Browns center JC Tretter is cautiously optimistic the NFL season — at least some version of it — will take place in 2020. He's just not certain when it will start.
Read more

Schumer rips Trump, GOP over debate: ‘How are you...

The scale of the damage resembles other blasts involving the chemical compound commonly used as an agricultural fertilizer.
Read more

RNC scales back convention in Florida next month

The event will be hosted in a mix of outdoor and indoor venues, according to a letter by RNC Chairwoman Ronna McDaniel.
Read more

The vote comes after the school district received national attention over the policy.
Read more

Prince Andrew got away with 10 years of rudeness, partying and Thailand go go bars because of "privilege" while Meghan Markle and Prince Harry faced double standards, a royal author says.
Read more

The attorney general commented on the chain of command in the Justice Department, questioning the actions of some justices and "junior members."
Read more

Migrant Legal Aid said the incident, which was recorded at EDS Schoenborn Orchard, contained "some of the worst verbal abuse" they have ever heard.
Read more

New Zealand held its own election debate after Trump...

While Trump and Biden tore strips off each other before a horrified TV audience, the two alternatives for New Zealand prime minister held an election debate which could not have been more different.
Read more

Flynn suspects the current judge overseeing his case of wanting to "propose contempt and perjury charges against" him.
Read more

Body Found Burning in Pile of Debris on San...

Officers made the gruesome discovery around 4:30 a.m. Sunday while patrolling the South of Market area.
Read more

Some publishers cool to post-White House book by Trump

One of publishing’s most thriving genres of the past four years, books about President Donald Trump, is not going to end when he leaves office.
Read more

A truce called for the Muslim holiday of Eid has held, and the insurgent group is raising hopes it may be extended.
Read more

Foie gras legal to serve in California restaurants after...

Foie gras could make a comeback in California restaurants after a judge ruled the delicacy, which was banned over concerns about animal cruelty, can be brought in from out of state. CBS Los Angeles reports.
Read more

Coronavirus: Thousands protest in Israel over handling of economy

Thousands have rallied against what they say is hardship caused by the mishandling of the crisis.
Read more

In Response to Georgia Churches Reopening, Pastors Unite to...

Though Governor Brian Kemp has permitted places of worship to reopen with additional guidelines in place to mitigate spread of the new coronavirus, some religious leaders have continued to offer services exclusively online.
Read more

The House passed a bill on Thursday to accommodate and protect pregnant workers in a 329-73 vote.The Pregnant Workers Fairness Act (PWFA) was introduced by Rep. Jerry Nadler (D-N.Y.) and would require employers to...
Read more

A second set of social media posts casts doubt on Ted Howze’s claim that another person gained access to his accounts.
Read more

"There is a compromise if the speaker [of the House] is willing to move forward," Steven Mnuchin said.
Read more

The most memorable moments from Chiefs vs. Texans on...

It's been over seven months since Super Bowl LIV, and the defending champion Kansas City Chiefs picked up right where they left off with a 34-20 win over the Houston Texans.
Read more