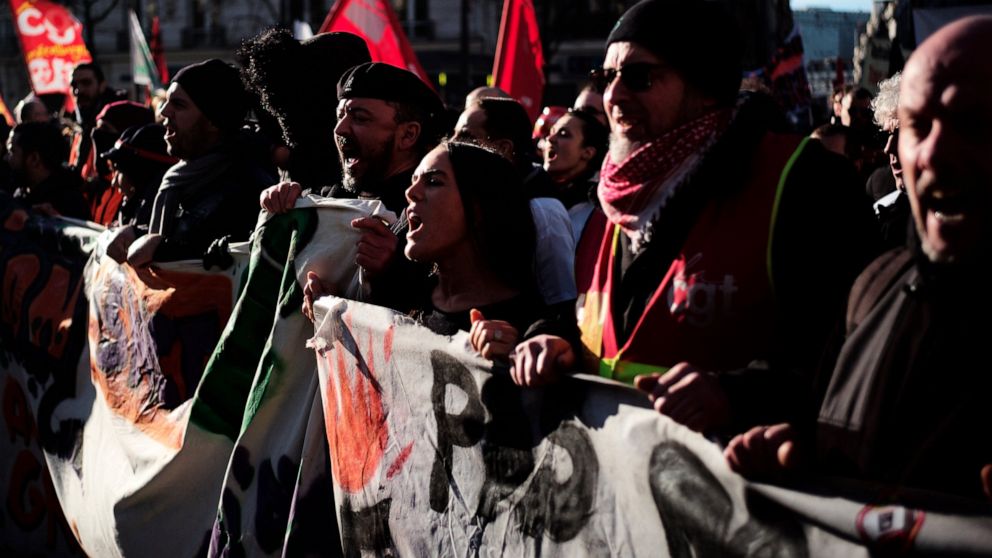 Opponents of President Emmanuel Macron’s proposed overhaul of France’s pension system marched in Paris and other French cities Thursday, the latest round of street protests against the government plan that also has brought 43 straight days of railway strikes.

At the call of trade unions, train and metro workers, teachers and other workers took to the French capital’s streets demand that the government scrap its pension proposals.

Hard-left unions said they still were dissatisfied despite the government’s decision last week to suspend a central piece of the proposed reform plan: raising the retirement age to qualify for a full pension from 62 to 64.

Legislation incorporating other parts of the government’s pension reform plan is to be presented at a Cabinet meeting next week. After that, there would be a three-month discussion with unions about financing the new pension system, including potential measures to raise taxes or the retirement age.

Opponents fear the reform will force them to work longer for less money.

Macron says the new system, which aims at unifying 42 state-funded pension regimes, will be fairer and more sustainable.

Macron called this week for calm and clarity and promised better explanation of what the changes will mean for different French workers.

The weeks of strikes and protests have hobbled public transportation and disrupted schools, hospitals, courthouses and even opera houses.

While the number of striking workers has diminished since the movement began Dec. 5, the country’s trains and Paris subways were still disrupted Thursday.

Sharjah to launch coding academy for women and girls this year

Lost your keys? Google Assistant can now help you...

If you have a Google Nest speaker you can ask Google Assistant to call your misplaced items – provided they have a Tile tracker on them.
Read more

A tumultuous year-long race to Iowa culminates in Monday’s...

2020 presidential candidates have sharpened their attacks in attempt to win over Iowa caucus-goers.
Read more