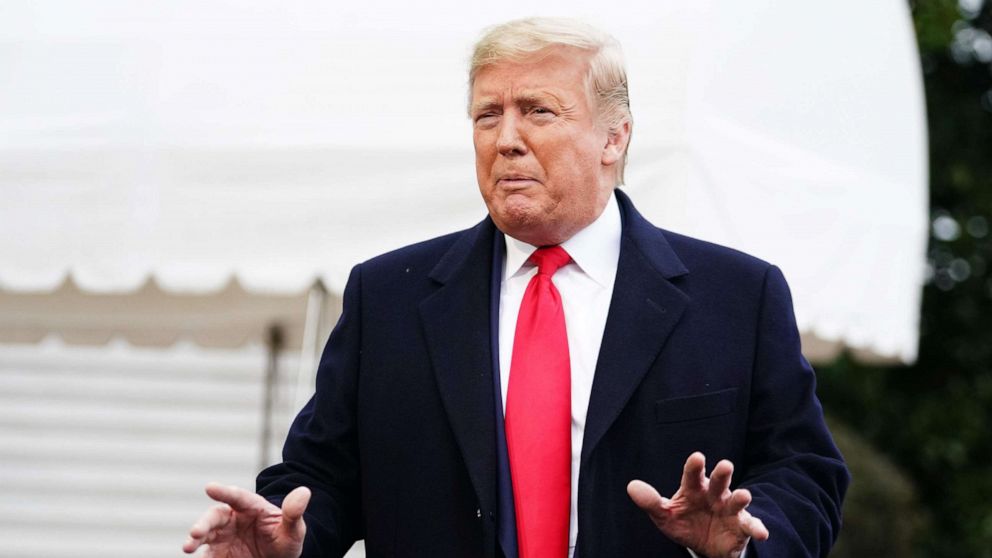 President Donald Trump’s hold on security assistance to Ukraine was illegal, according to the federal government’s independent watchdog.

The new determination by the Government Accountability Office, or GAO, comes as the Senate is set to take up the articles of impeachment against Trump, which were delivered from the House on Wednesday.

Last June, Trump placed a hold on $214 million of security assistance from the Pentagon for Ukraine, as it battles Russian-led separatists in its eastern provinces. The White House Office of Management and Budget, or OMB, told Congress, which had passed the budget law appropriating those funds, that they were being withheld to ensure they weren’t spent “in a manner that could conflict with the Presidents foreign policy.”

But GAO said that the executive branch can’t use that kind of policy reason to withhold funds appropriated by Congress.

“OMB violated the [law] when it withheld” the Ukraine assistance “for policy reasons,” the report concludes.

The GAO is an independent, nonpartisan watchdog agency that investigates the federal government on behalf of Congress, taking up requests on behalf of both Republicans and Democrats.

Trump had placed a hold on a total of $391 million of security assistance to Ukraine and has provided various reasons for doing so — including that European allies have not contributed enough to Ukraine’s security or that he was concerned the money would be well-spent and not used for corruption.

The other pot of money came from the State Department, and the GAO is still investigating whether its funds were withheld for legitimate reasons, but said that the department and OMB have failed to comply with their investigation.

This is a breaking news story. Please check back in for updates.

Masks to become part of life in California, but...

For Californians venturing outside, donning a mask will be as common as putting on a cap or sunglasses when the state begins gradually easing stay-at-home orders
Read more

Nearly 39 million have sought US jobless aid since...

More than 2.4 million people applied for U.S. unemployment benefits last week in the latest wave of layoffs from the viral outbreak that triggered widespread business shutdowns two months ago and sent the economy into a deep recession
Read more

We've seen some leaked battery specs for Samsung's upcoming phone line, but they're the same as its current ones.
Read more

The US coronavirus outbreak has altered daily life in almost every way. Here's the latest updates on US Covid-19 cases, deaths, reopenings, the government response, unemployment and more.
Read more

The PatchWall 3.0 update was introduced in April.
Read more

The former CEO of a bank once owned by Treasury Secretary Steven Mnuchin came into his role in 2017 with reform of the Community Reinvestment Act as a top priority.
Read more

A local reporter says he was "insulted," "berated" and "practically chased" during a protest on Long Island by those rallying against stay-at-home orders amid the coronavirus pandemic.News 12 Long Island reporter K...
Read more

Five years ago, the Department of Defense set dozens of security hygiene goals. A new report finds that it has abandoned or lost track of most of them.
Read more

I love my Peloton. But as a black person,...

Peloton sales and subscriptions are up as the pandemic keeps would-be gym goers at home. But one rider finds himself navigating more than he bargained for.
Read more

SpaceX is set to launch its first astronaut crew into orbit Wednesday afternoon, a flight that marks the return of human spaceflight from U.S. soil for the first time in nearly a decade.
Read more

The Change.org petition calls on the presumptive Democratic presidential nominee to endorse monthly payments of $2,000 amid the pandemic.
Read more

Earlier this month, the head of the Catholic church tested negative for coronavirus and he made the plea to his clergy during a livestreamed mass from within the Vatican.
Read more

Leading the House impeachment managers is not where Adam...

When Democratic Rep. Adam Schiff of California decided to join the House Intelligence Committee in 2008, taking a leading role in impeaching a President wasn't quite what he anticipated.
Read more

India announces easing of a stringent lockdown for 1.3 billion people by allowing opening of neighborhood and standalone shops with restrictions such as 50% of workers with face masks and social distancing
Read more

U.N. Secretary-General Says Climate Change Devastation Will Be ‘Many...

Retired judge called to determine if Flynn should be...

The appointment of Retired Judge John Gleeson was announced by Federal Judge Emmet Sullivan, who is currently weighing the fate of Flynn's case.
Read more

Tech chiefs press cloud suppliers for consistency on security data. Cloud providers are coming under pressure from some of their biggest customers to adhere to one across-the-board standard of information on how they handle client data and cybersecurity. Amo…
Read more

The series finale finally revealed who shot Ghost⁠—but at least six other fake endings were filmed to keep the killer a secret even from the cast.
Read more

The president discussed the next coronavirus relief package, Obama and the wall. And the election was front and center.
Read more

Fire at Newton-le-Willows recycling plant on hottest day of...

Twenty fire engines are at the scene of the blaze on the Sankey Valley Industrial estate in Newton-le-Willows.
Read more