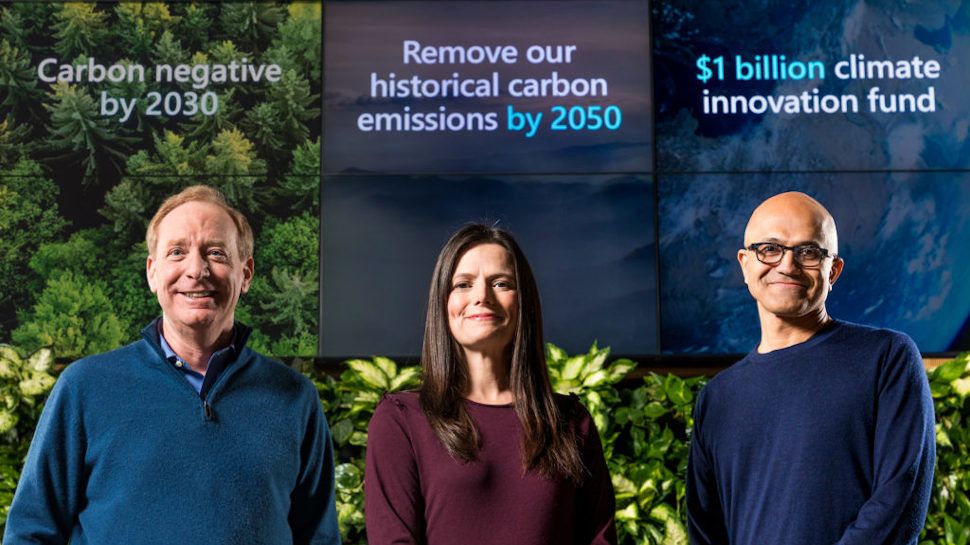 Microsoft has announced ambitious new plans to cut its impact on the environment.

The computing giant is set to go a step further than most by pledging to become “carbon negative” by 2050.

It says it will also work towards removing from the environment all carbon emissions the company has ever produced, either directly or via electrical consumption.

Microsoft has been working towards achieving carbon neutrality since 2012, mostly by investing in offsets that avoid emissions rather than actively removing carbon from the environment.

Microsoft President Brad Smith says the company recognises its efforts to date have not been extensive enough. “Neutral is not enough to address the world’s needs,” he said in a blog post. “While the world will need to reach net zero, those of us who can afford to move faster and go further should do so.”

Further to its new pledge, Microsoft also announced an initiative that will harness its technology to help suppliers and customers reduce their own carbon footprints, as well a $1 billion climate innovation fund. The fund is designed to accelerate the global development of carbon reduction, capture and removal technology.

In the name of transparency, the company has promised to publish an annual Environmental Sustainability Report, which will update the public on the progress of its environmental initiatives.

Defund the Police: What It Means and How It...

In the wake of George Floyd’s death, protesters across the country are calling on officials to defund the police. WSJ’s Shelby Holliday examines what the phrase means and how it might work. Photo: Ragan Clark / Associated Press
Read more

The surge in coronavirus cases across the country has put a strain on U.S. testing capacity - again.
Read more

The charges allege that he and his cohorts cast mail-in ballots for able-bodied voters, falsely proclaiming the voters were disabled.
Read more

Both sides will soon have to decide when and how they compromise, or whether they are willing to walk away.
Read more

Retraining to move from oil and gas jobs to the renewables sector can be "prohibitively expensive", a survey says.
Read more

Connecticut woman still missing after six months of no...

Monica Decker, 53, of Bridgeport, Connecticut, disappeared from her home on April 8, 2020. When she didn’t show up to work for two days, the police were called to do a welfare check. Her car, cell phone and other personal belongings found at the home. Monica …
Read more

Growing up as a black child in post-war Germany

The racism and abuse suffered by thousands of children born to African-American fathers and white German mothers in post-war Germany.
Read more

Districts go round and round on school bus reopening...

Reopening schools during the coronavirus pandemic means putting children on school buses, and districts are working on plans to limit the risk
Read more

GOP may face choice on tax cut or stimulus...

Senate Republicans are badly divided over whether to include stimulus checks or a payroll-tax cut in the new coronavirus relief package. Some GOP senat...
Read more

The Texas Rangers would prefer to stay home in their new ballpark instead of returning to Arizona whenever it is time to get back to spring training.
Read more

Trump expected to keep Esper at the Pentagon despite...

Esper has no plans to resign.
Read more

Republican North Dakota Gov. Doug Burgum said he hopes his state skips the "ideological and political" argument about the use of face masks during an emotional speech Friday, as the pandemic continues to severely impact p...
Read more

Kissinger Still Pushing the Myth of a Happy New...

Even with the reality of the virus all around us, old peddlers of internationalism ignore the signs of states hunkering down. The post Kissinger Still Pushing the Myth of a Happy New World Order appeared first on The American Conservative.
Read more

Buttigieg: McConnell will have to decide if he’ll stand...

The top U.N. official in Libya is warning that the war in the north African country will “intensify, broaden and deepen” because of increasing foreign intervention and the massive influx of weapons, military equipment and mercenaries to both sides
Read more

Boeing says pandemic will cut demand for planes for...

Boeing says the pandemic will reduce demand for new planes for the next decade, long after experts expect a vaccine for COVID-19
Read more

Democrat Raphael Warnock assailed Loeffler for associating herself with a congressional candidate who has embraced baseless QAnon conspiracy theories and made racist remarks.
Read more

Have you imagined piloting a plane into world airports
Read more

The surgeon general is begging you to wear a...

On Fox Across America with Jimmy Failla, Fox News Contributor Jessica Tarlov talked about who she thinks will be in the Biden-Harris Cabinet, and if the new administration can gets things done with a Republican Senate. "I think it is more in Joe Biden's natur…
Read more

"I think young people right now have a very activist, disciplined mindset and they are not here with the intent of voting for their favorite person," Ocasio-Cortez said Sunday on CNN.
Read more

CNN crew backed out of an area after a...

A CNN crew was confronted by protesters over the weekend in Atlanta, with reporter Natasha Chen telling anchor Wolf Blitzer that the crew decided to "back out of the area" after people "got aggressive" and broke its camer...
Read more

"The infections keep going up, and it feels like there's no end in sight," said Texas nurse Juan Anchondo.
Read more

Biden has immigrants, advocates hoping for reversal of Trump’s...

Immigration advocates and even some Central Americans mulling entering the U.S. are reportedly rooting hard for a Joe Biden victory in November, encouraged by the Democratic nominee's pledge to dismantle President Trump’s border policies.
Read more

Presented by FacebookWelcome to The...
Read more

A county circuit judge had invalidated them.
Read more

In cities including New York, San Francisco and Seattle the high cost of living led to higher wages. Remote work might change that.
Read more