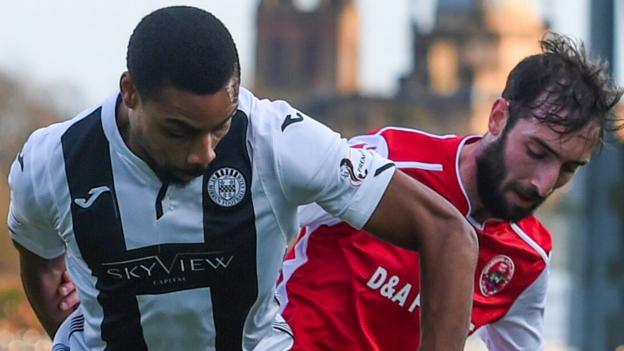 St Mirren avoided a Scottish Cup shock by edging past East of Scotland League side Broxburn Athletic in Paisley.

The non-league outfit rarely threatened their Scottish Premiership hosts, but held out until the early part of the second half before conceding.

Calum Waters’ shot deflected off an unwitting Jon Obika before spinning into the net before Danny Mullen’s late drive put the outcome beyond doubt.

It means Jim Goodwin’s side will be in Sunday’s draw for the last 16.

The chart-topping rapper was filmed lashing out at a woman who was filming him on her phone.
Read more

Small business owners still have time to save on...

With a little over 1 month to go in 2019, small business owners should think about purchases or investments that make good business sense and will give them a break on taxes
Read more

If Major League Baseball can't play in front of fans at a team's home ballpark because of the virus outbreak, the sport's first preference likely would be to switch games to the visiting team's stadium if possible, a person familiar with the deliberations tol…
Read more

The head of Iran’s Revolutionary Guard warned the U.S. and its allies as he addressed a pro-government demonstration denouncing last week’s violent protests over a fuel price hike
Read more

McDavid shines in return from injury, Oilers hold off...

Kendall Jenner Has No Time For People Telling Her...

She had some choice words for some nasty followers.
Read more

Prince Harry, Meghan to give up 'royal highness' titles