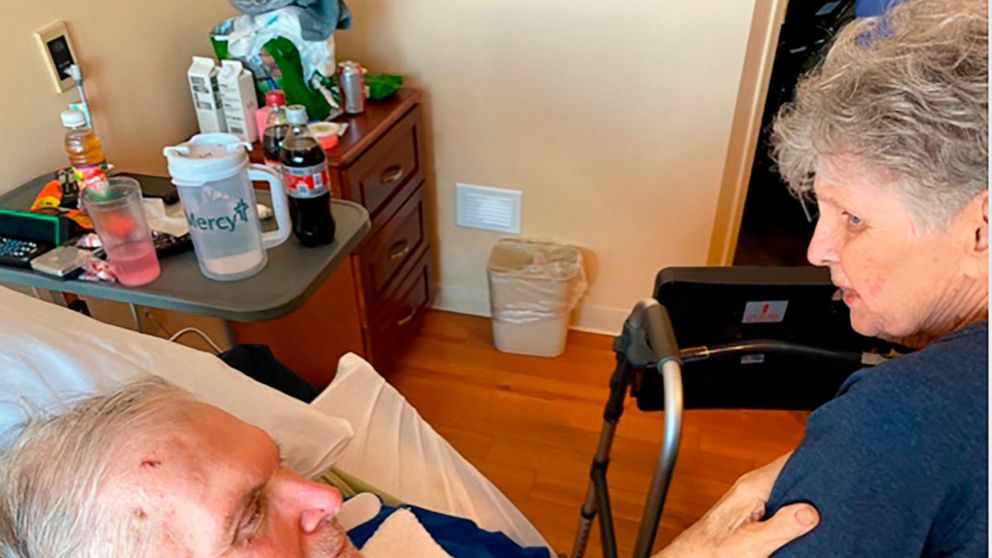 A couple who had been together for nearly 65 years have died on the same day at a St. Louis-area nursing home.

Jack and Harriet Morrison’s beds were placed next to each other in their final hours, allowing them to hold hands, the St. Louis Post-Dispatch reported.

“Im sad. But I know theyre at peace and theyre back together,” said Sue Wagener, a niece raised by the Morrisons. It truly was a love story for the books.

The couple went on their first date on Halloween of 1955. “They went to a little diner and never separated from that day on,” Wagener said. They married about six months later.

They met as Harriett accompanied her father on a trip with the drum and bugle corp he played in. Jack was behind the wheel of a charter bus that drove the group to some of its concerts.

Together, the couple ran and grew V-K Bus Lines while raising Wagener and their two sons.

They were active Moolah Shriners, a fraternal order devoted to philanthropy, and traveled the world next to each other, often on Shrine-related trips, including to Europe and Australia.

About a year ago, Harriet tripped while walking their dog, breaking her pelvis and hip, Wagener said. She had dementia, and moved into The Woodlands of Arnold nursing home and rehabilitation center.

Meanwhile, Jack was having trouble living at home. Wagener said she talked him into moving into a villa at the Woodlands in May. In September, he also fell, breaking his neck. He then moved into the nursing home, four doors down the hall from his wife.

Even then, they would nap together, one in a wheelchair, the other in bed their hands intertwined.

“Some days she knew him; other days she didnt,” said Wagener.

Wagener said she told Jack on Christmas Eve that Harriet had stopped eating and drinking. He barely ate or drank after that.

About 11 p.m. on Jan. 10, she got a call from a nurse saying Harriet appeared close to death. The nurse asked if staff could move furniture out of Jacks room so the couple could be together.

Wagener said there was nothing shed love more.

On the Outskirts of Town, Part 6

The trial takes a sharp turn when one witness takes the stand and it's a bombshell.
Read more

Speaker Nancy Pelosi (D-Calif.) on Tuesday came to the defense of National Institute of Allergy and Infectious Diseases Director Dr. Anthony Fauci, saying he is crucial to ending the coronavirus outbreak in the U.S."Dr. Fauci is a truth-teller...
Read more

With the start of the winter wheat harvest just weeks away, U.S. harvesters are struggling to get the foreign workers they usually rely on to run their combines
Read more

A fifth-generation F-35 stealth fighter jet has crashed at a Florida base on the Panhandle, just days after an F-22 jet succumbed to the same fate.
Read more

President Trump says he is taking the anti-malaria drug hydroxychloroquine to prevent himself from getting COVID-19. The drug is unproven as a treatment for the virus and the FDA has warned it could have dangerous side effects. CBS News medical contributor Dr…
Read more

Prince Harry and Meghan Markle Call in Police Over...

The Duke and Duchess of Sussex have reported a string of drone attacks thought to be by paparazzi photographers at Tyler Perry's $18 million mansion, where they are staying.
Read more

MOTD podcast – Shearer and Wright on the best...

Our Match of the Day pundits discuss and debate the best Premier League games of all time.
Read more

Trump Says U.S. and China Are Fighting Coronavirus Together...

Trump praised Chinese President Xi Jinping on Friday despite having accused China of culpability over the pandemic.
Read more

A tropical storm with wind speeds up to 50 mph made landfall in South Carolina on Wednesday, causing heavy rainfall across the state.The National Hurricane Center (NHC) reported that Tropical Storm Bertha made land...
Read more

A Michigan sheriff compared the governor's stay-at-home order to a mass arrest of the state's residents while speaking at a rally this week opposing the coronavirus restrictions.Barry County Sheriff Dar Leaf told t...
Read more

Police Station on Fire in Minneapolis Amid Protests Over...

Footage shows a police precinct burning in Minneapolis after it was taken over by protesters late Thursday. Demonstrations over the death of George Floyd in police custody spread to other cities. Photo: John Minchillo/AP
Read more

The health crisis has increasingly become an economic one.
Read more

Reopening tension pits state, local officials against each other...

A growing number of local officials are writing their own reopening playbooks, defying state leaders in disputes that foretell months of regional skirmishes.
Read more

The star extols the virtues of female directors, as she helps curate a list of films for Women's Day.
Read more