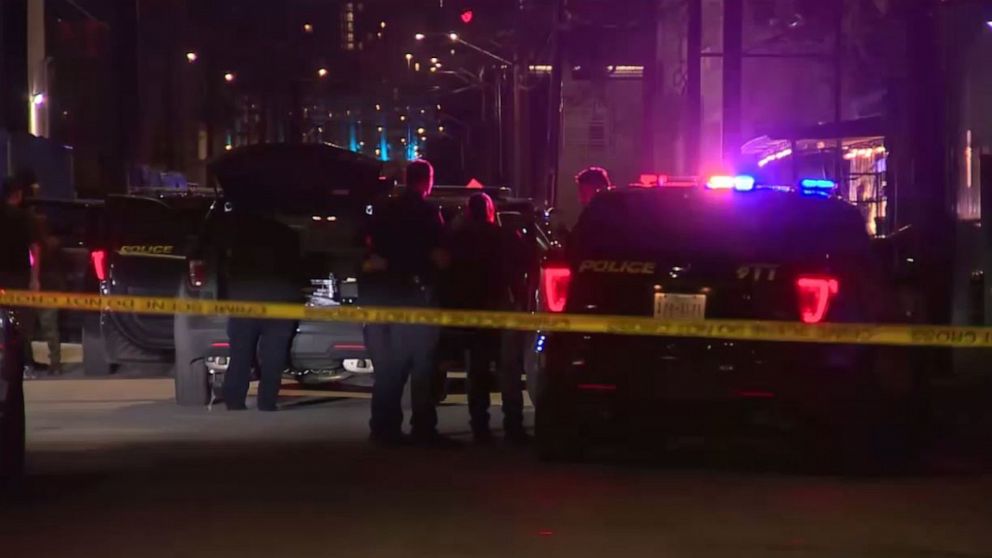 Two people are dead and five injured after a person opened fire “indiscriminately” at a San Antonio bar Sunday night.

San Antonio Police Department responded to a shooting at a bar called Ventura, steps from the San Antonio River, at 8 p.m. local time. An altercation appears to have broken out between customers when one person pulled out a gun and began shooting, Police Chief William McManus said at a press conference Sunday night.

In total, seven people were shot. A 21-year-old man died inside the club, while a second person in critical condition was later pronounced dead.

Five people are currently being treated at area hospitals. Their conditions are unclear at this moment, police said.

All of the victims appear to be patrons, McManus said. No employees of the bar were shot.

No one is in custody, he said.

“We’re working on that, I’m confident that we will identify the individual and have that person in custody sooner than later,” McManus said.

The concert, called Living the DREAM, featured a lineup of up-and-coming rappers popular on social media.

The US is to withdraw nearly 12,000 troops from Germany in a move that has attracted bipartisan congressional opposition and roiled key allies who see the move as a blow to NATO.
Read more

The public footpath runs close to the house of Gruff, seven, who is at risk if he catches Covid-19.
Read more

The government of Brazilian President Jair Bolsonaro has complied with a court order to resume publication of full data on the coronavirus pandemic, including the cumulative death toll from COVID-19
Read more

Who Could Bernie Sanders Pick to Be His Vice...

The senator from Vermont and his surrogates have offered some clues as to who the progressive presidential hopeful could choose.
Read more

Everything you need to host a beautiful, socially distant...

Its a weird time for a lot of things, and weddings are no exception. While you may have dreamed of having hundreds of...
Read more

Tetsuko Shakuda was a frightened 14-year-old when she resumed her work as a conductor on a tram line in the devastated city of Hiroshima, just three days after the atomic bomb exploded 75 years ago, badly damaging the tracks and most of the trams
Read more

Possible tropical developement off the Mid-Atlantic

The area of disturbance responsible for soaking the Southeast is forecast to move into the Mid-Atlantic where it can gain strength.. CNN Meteorologist Pedram Javaheri has the latest on how much more rain the region will get and the likelihood of tropical dev…
Read more

AP-NORC poll: Half of Americans would get a COVID-19...

Protests sparked by the police killing of George Floyd have now ignited a sweeping national debate about the racial prejudices of some of the country's political icons.
Read more

The Mafia Trilogy will bring open world classics to...

The Mafia trilogy of games brings three games (two of them great) to consoles this summer.
Read more

Florida bar owners and bartenders are planning to protest Gov. Ron DeSantis’ coronavirus shutdown, which is keeping their businesses closed while allowing restaurants and gyms to reopen.
Read more

The awards - postponed for the coronavirus - were first held just a year before the Spanish Flu.
Read more

Texas to loosen restrictions on malls, movie theaters in...

Gov. Greg Abbott will let a range of businesses start reopening but not salons, barber shops or gyms.
Read more

How to watch the Bundesliga: live stream every match...

Bayern opened up a 7-point lead over Dortmund on Tuesday night - here's how to live stream the Bundesliga and watch every match online this week.
Read more

Coronavirus restrictions to tackle the spread of COVID-19 are hampering efforts to prevent the spread of Dengue, doctors have warned.
Read more

Pelosi calls for removal of Confederate statues from U.S....

Pelosi's letter comes as Trump has said he will not consider renaming military bases named for Confederate generals.
Read more

The 2020 Cardinals Hall of Fame Induction Class will be unveiled during a 30-minute special on Friday, May 22, at 6:30 p.m. CT on FOX Sports Midwest.
Read more