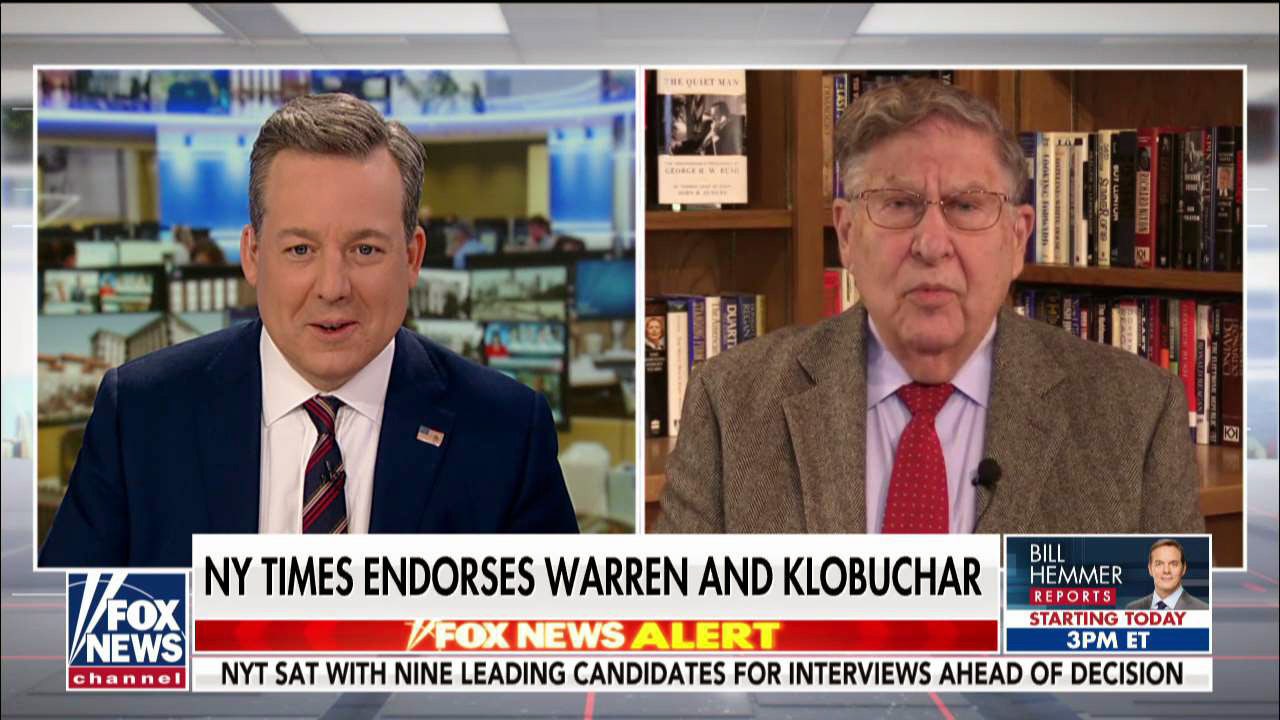 “Frankly, they just underscored what [President] Trump has been saying all along,” said Sununu, who added: “I think you’re going to see more of this as newspapers and media across the country that are close to the Democrats start accepting the responsibility of endorsements in this primary process and I think you’re going to see some of the dividing lines within the party start to show up within the endorsements.”

Sununu said that the Times editorial board had “undercut” Biden “tremendously,” but also noted that the paper had paid Warren an interesting compliment.

“They talked about her being a gifted storyteller,” said Sununu, a former White House Chief of Staff under President George H.W. Bush. “All I could think of when I saw that phrase was her lying about her Native American heritage or her lying about having been fired for being pregnant.”

The Times was criticized from both sides of the political aisle when it announced late Sunday that its editorial board had broken from convention and endorsed not one, but two Democratic candidates for president.

“I mean, newspaper endorsements are silly and self-important to begin with,” Politico’s Tim Alberta wrote. “But this Times bit… good grief. Have these people zero self-awareness?”

Mike Schultz’ Brutal ‘Before and After’ Coronavirus Selfies Will...

The RN posted two selfies side by side to show the effects that being intubated after a COVID-19 diagnosis had on his body.
Read more

Lamar Jackson is known for his unique rushing ability and dynamic athleticism, but some are concerned about the number of hits he's absorbing each week.
Read more

Twenty four people are charged in connection with offences at protests held across London.
Read more

Across Sun Belt, hopes for economy give way to...

For residents across America’s Sun Belt — business owners and workers, consumers and home buyers —  the past three months have delivered about the scariest ride in memory
Read more

As people become sick of quarantine cabin fever, this...

As the summer of social distancing rolls on, families desperate for some time out of the house are turning to RV camping – in record numbers.
Read more

Rep. Doug Collins, R-Ga., discussed the coronavirus outbreak with the "Fox News Rundown" podcast Friday, saying Americans have culturally been reluctant to accept the shutdown as opposed to other countries showing progress, adding that the American death rate…
Read more

Former White House chief strategist Stephen Bannon and three co-defendants are scheduled to stand trial in May over charges that they scammed hundreds of thousands of donors into contributing to a fundraising campaign pur...
Read more

The Microsoft co-founder says rich countries should do more and addresses conspiracy theories about himself.
Read more

Raspberry Pi not powerful enough for you? This compact...

It’s not as small as the Pi, and it won’t be as cheap either – but it offers a lot more power on tap in a still compact form-factor.
Read more

5-year-old boy shoots brother to death after finding gun he thinks is a toy in the woodsgo.com
Read more

Rwanda has enlisted anti-epidemic robots in its fight against...

Rwanda has introduced robots as part of its fight against coronavirus.
Read more

In this episode of "Intelligence Matters," Sadjadpour, an Iran policy analyst, talks with Michael Morell about the effects of the spread of COVID-19 in Iran, and the toll it has taken.
Read more

Tulsi Gabbard, the Only Non-White Dem Candidate With Primary...

The Democratic Party was scrutinized for lack of diversity last week after releasing the DNC's lineup, which excluded Gabbard as well as Andrew Yang and Julian Castro.
Read more

Two Russian cosmonauts and a US astronaut docked at the space station after their rocket took off from Kazakhstan.
Read more

Louisiana couple gets married in airport right before their...

Iceland's president surged to reelection with more than 90 percent of the vote in results released Sunday after facing a vocal supporter of President Trump in his bid to remain in office....
Read more

The ground-breaking musician influenced many artists with songs made on home-built synthesizers.
Read more

Also getting PPP loans: Businesses where sales have boomed

Millions in Paycheck Protection Program loans have flowed to industries that it turns out were boosted by COVID-19.
Read more

John Lewis’ answer to my question guides me to...

A friend once advised me to never meet my heroes because it would always disappoint. She never met Congressman John Lewis, writes Nicole Austin-Hillery.
Read more

When it comes to unanimous Hall picks, Jeter could be No. 2.