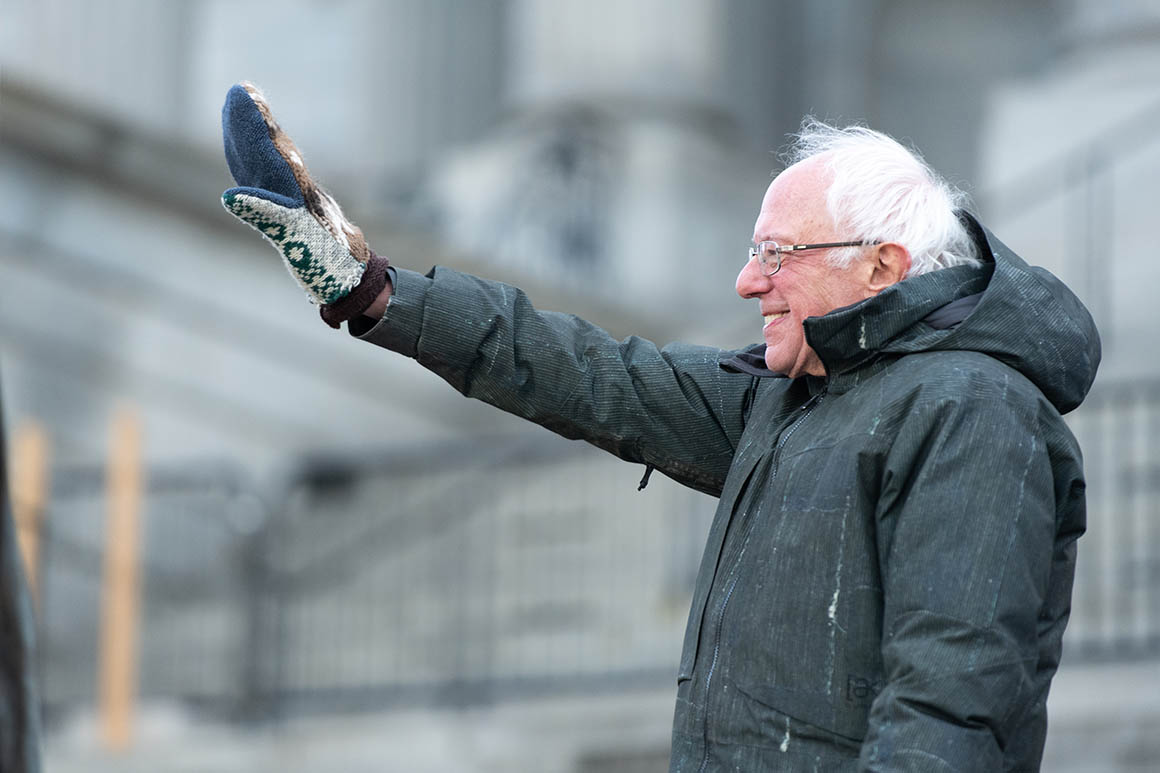 Both Biden and Sanders polled well ahead of other contenders like Elizabeth Warren at 14 percent and Pete Buttigieg at 11 percent. Michael Bloombergs support was at 5 percent.

Sanders and Warren have been tagged as the progressives in the group, and recent tensions have created a divide among their voters. Warren accused Sanders of saying a woman couldn’t win the 2020 presidential race in a private 2018 meeting, and Sanders has vehemently denied the claim. Sharp attacks also recently came from Sanders’ 2016 opponent, Hillary Clinton, who called Sanders a career politician who nobody likes in a forthcoming documentary.

Despite the controversy, Sanders has maintained consistent enthusiasm among voters since last fall. In the new CNN poll, 38 percent of Democratic voters said they would be enthusiastic if Sanders wins the nomination, marking just a 1 point dip from October, whereas voters’ enthusiasm for Warren as the potential nominee has fallen 12 points to 29 percent. Bidens dropped 9 points to 34 percent.

Biden is still polling highest at 45 percent with the perceived best chance to beat President Donald Trump in 2020. Sanders at 24 percent saw an 8-point increase since last months poll.

Trump has fixated on Sanders campaign in recent weeks, accusing Democrats of trying to sabotage his presidential bid by pulling Sanders out of Iowa during impeachment proceedings and by unfairly attacking him.

They are taking the nomination away from Bernie for a second time. Rigged! the president tweeted Wednesday morning.

The two Ts that could help America emerge from...

Epidemiologists believe that if properly employed, testing and tracing can allow the U.S. to open some businesses and relax social distancing requirements.
Read more

BBC Sport takes a look back at the 30 years that have passed since Liverpool's last league title back in 1990 as the Reds are confirmed as Premier League champions.
Read more

Houston Texans wide receiver Kenny Stills told reporters on Monday that he thinks that the NFL could have helped save "so many lives" if it embraced players' kneeling protests against racial injustice sooner.Stills...
Read more

Preview: Lightning looking for measure of revenge in rematch...

Andrei Vasilevskiy and the Tampa Bay Lightning head to Boston to face their Atlantic-Division rival Bruins for the second time this week.
Read more

"They know that they’re incurring a risk, but it’s for a greater cause,” one Atlanta physician says.
Read more

The New Zealand government on Friday extended a lockdown in its largest city as the country faces its first COVID-19 outbreak in more than three months....
Read more

Two men who are accused by Japanese authorities of aiding former Nissan's chairman Carlos Ghosn in his escape from Japan were arrested in Massachusetts on Wednesday, and are set to appear by video in court this afternoon....
Read more

"Praying that it does not come to this!" Louisiana officials said of the warning.
Read more

The upcoming season of “The Boys” has so many surprises, revelations and themes ripped from today’s front pages that some actors are wondering if their show runner has psychic super abilities
Read more

Utilities want to charge customers to make up for...

AOC to Yoho: ‘I am someone’s daughter too’

New York Rep. Alexandria Ocasio-Cortez spoke on the House floor Thursday about a heated exchange earlier this week with Florida Rep. Ted Yoho after which he reportedly called her a "f**king bitch," saying that by accosting her, he gave "permission to other me…
Read more

US: Taliban’s ‘reduction of violence’ deal to start tonight

Some senators said extending an unemployment insurance benefit that currently provides an additional $600 per week could be necessary.
Read more

World leaders have joined survivors of the 1995 Srebrenica massacre to remember the 25th anniversary of the atrocity, the only crime in Europe since World War II that has been declared a genocide
Read more

Champions League to be played at mini-tournament in Lisbon

Apple first US company to be valued at $2tn

Every Conservative to Attack Cardi B For ‘WAP’

Stocks are drifting slightly higher in early trading Wednesday as tensions between the U.S. and China flare up again
Read more

“Many civilians” said to be among victims of Afghan...

Michigan’s governor declared a state of emergency and thousands of people were forced to evacuate after the Edenville and Sanford Dams in the center of the state were breached, following days of heavy rainfall. Photo: TC Vortex/Reuters
Read more

A new study has examined the impact of psilocybin—the active ingredient in magic mushrooms—on the brain.
Read more

EU urges Trump to rethink cutting funding to WHO

The U.S. is currently the largest funder of the WHO, and the organization is expected to be weakened by its departure.
Read more

On The Money: Initial jobless claims drop to 1.9...

Welcome back to On The Money. I'm Sylvan Lane, and here's your nightly guide to everything affecting your bills, bank account and bottom line.See something I missed? Let me know ...
Read more

Some cities reopen as other wait and watch

The jokes write themselves: The Jacksonville Jaguars are going to play home games in front of a significantly reduced number of fans this season.
Read more

Will Smith has fans thinking Jason Derulo knocked his...

Will Smith appears to have had his front teeth knocked out by none other than Jason Derulo.
Read more

The Senate Foreign Relations Committee will hold a vote this week on President Trump's nominee to lead the U.S. Agency for Global Media, despite an ongoing investigation.According to a schedule released by Committe...
Read more

Rumor: The Witcher may get an animated movie on Netflix before season...