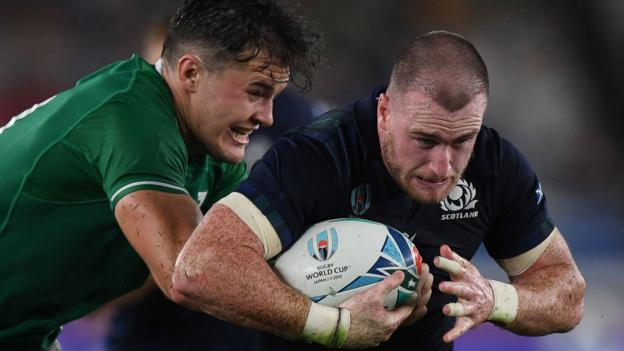 Scotland have been guilty of “beating ourselves” in recent matches, says newly-appointed captain Stuart Hogg.

The Exeter Chiefs full-back, 27, leads Gregor Townsend’s men in the forthcoming Six Nations, beginning with a trip to Ireland on 1 February.

In 2019, Scotland managed just one championship victory and were dumped out of the World Cup at the group stage after being trounced by the Irish.

“The main thing is sticking to our processes,” Hogg told BBC Sport.

“At times when we’ve been beaten, we’ve beaten ourselves. We’ve coughed up ball cheaply, we’ve conceded two or three early tries and our gameplan’s kind of gone out the window.

“We’ve learned from that, we’re hoping to take our opportunities when they’re available, go out there and play our game.”

“We pride ourselves on our defence, we’ve got a new [defence] coach who is bringing in different systems and hopefully we can show what it means to play for Scotland,” Hogg added.

“We’re going to attack their attack and attack when we’ve got the ball. For us to go away to Ireland in the first game is perfect for us.

“We’re going to go across there, play with ambition, have some fun and do everything in our power to make sure we start our campaign in the best possible way.

“They’ve got world-class individuals and world-class coaches but it’s a challenge we’re very much looking forward to.”

Afghan officials say a suicide bombing that looked to target a military compound but exploded before its destination killed five civilians and wounded at least 29 others, including civilians and military personnel
Read more

How to watch The Blacklist season 7 finale online...

Get ready for an episode unlike any other - here's how to watch The Blacklist season 7 finale online from anywhere.
Read more

Couple reunites after months apart due to coronavirus restrictions

89-year-old Jean and 91-year-old Walter Willard, who have been married for 70 years, were separated for months due to coronavirus restrictions at Jean's nursing home. Earlier this month, the couple was finally able to reunite – and they couldn't stop kissing …
Read more

NASCAR is back – and there’s nothing subtle about...

NASCAR is ready to jump back into live racing with 7 races in 11 days, beginning at Darlington on Sunday, where there will be no practice and no qualifying.
Read more

The Democratic National Committee (DNC) is asking a federal judge to put on hold Wisconsin's absentee voting requirements to make it easier for people to cast their votes by mail amid the coronavirus outbreak.The D...
Read more

A 68-year-old black woman is suing four white police officers outside of Saint Louis for allegedly assaulting her and her son without cause. Adriana Diaz spoke to the woman, Marvia Gray, who told her she was terrified her son could have been killed.
Read more

Voters in three critical swing states are growing increasingly concerned about the coronavirus spreading across the United States, though they largely approve of the Trump administration's response to the outbreak....
Read more

Must-watch videos of the week

A black bear in a tub, a rare look at the Obama family, a light moment between the Cuomo brothers. These are the videos you don't want to miss this week.
Read more