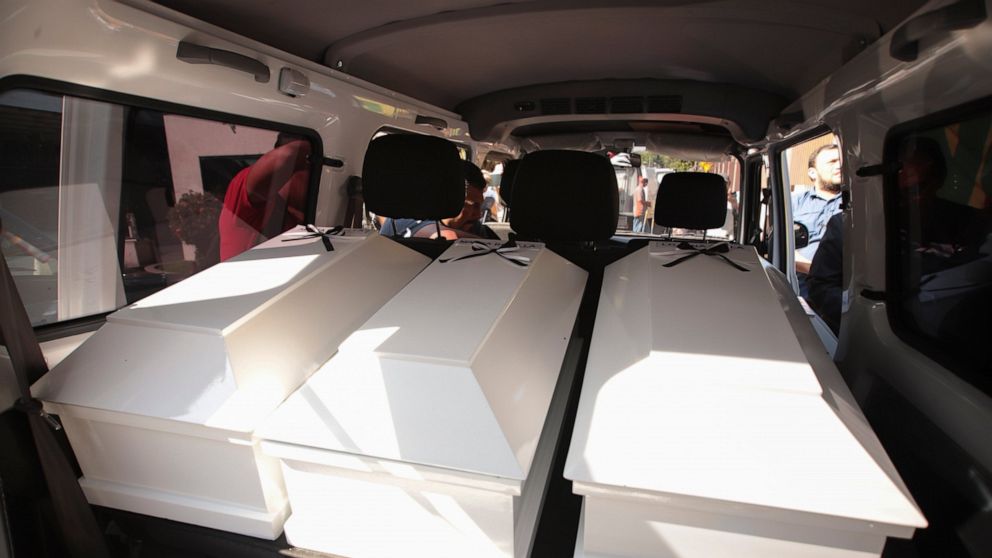 El Salvador’s forensic institute on Thursday turned over to family members the remains of six of the more than 200 rural residents killed by soldiers in August 1982 El Calabozo massacre.

Juana de Jesús Regaleño Bonilla cried over the caskets of her parents, three sisters and a sister-in-law.

Thank God we have come to recover the bones of our relatives, she said.

The remains were exhumed late last year and will be buried in El Calabozo, where soldiers are accused of burning homes and killing mostly women, children and the elderly over several days during the country’s civil war.

It’s hard for me to receive their bones, but it gives me strength and I have to be strong to demand justice, she said. They were massacred, it was a slaughter of innocent people. Her sisters were aged 10, 14 and 18 when they were killed and the oldest was pregnant.

They killed old people, women and children, burned houses, stole everything we had and threw the bodies in the river, said María Berta Regaleño, another relative.

Former human rights prosecutor David Morales who represents the victims, pushed in 2016 for the reopening of the case. A general amnesty had blocked its investigation, but the Supreme Court declared the amnesty unconstitutional. He said the Supreme Court had ordered that the El Calabozo case be reopened and investigated.

A report from the United Nations Truth Commission after the war said there exists sufficient evidence that on Aug. 22, 1982 soldiers of the Atlacatl Batallion deliberately killed more than 200 civilians, men, women and children it had captured without resistance.

This one-day Hunter rain boots sale is making a splash

President Trump signed his signature trade deal with Mexico and Canada Wednesday touting it as "very special," but as WSJ’s William Mauldin explains not everyone is pleased with the new pact. Photo Bloomberg
Read more

Substitute Gabriel Jesus scores an 80th-minute winner as Manchester City extend their advantage over Leicester to seven points in the battle for second spot in the Premier League.
Read more

Hone your Adobe CC skills with lifetime access to...

Adobe has a number of programs used by professionals around the world to create and edit photographs, graphic designs, motion graphics and visual effects for video.
Read more

Meet the pastor who wants the poor to pick a president