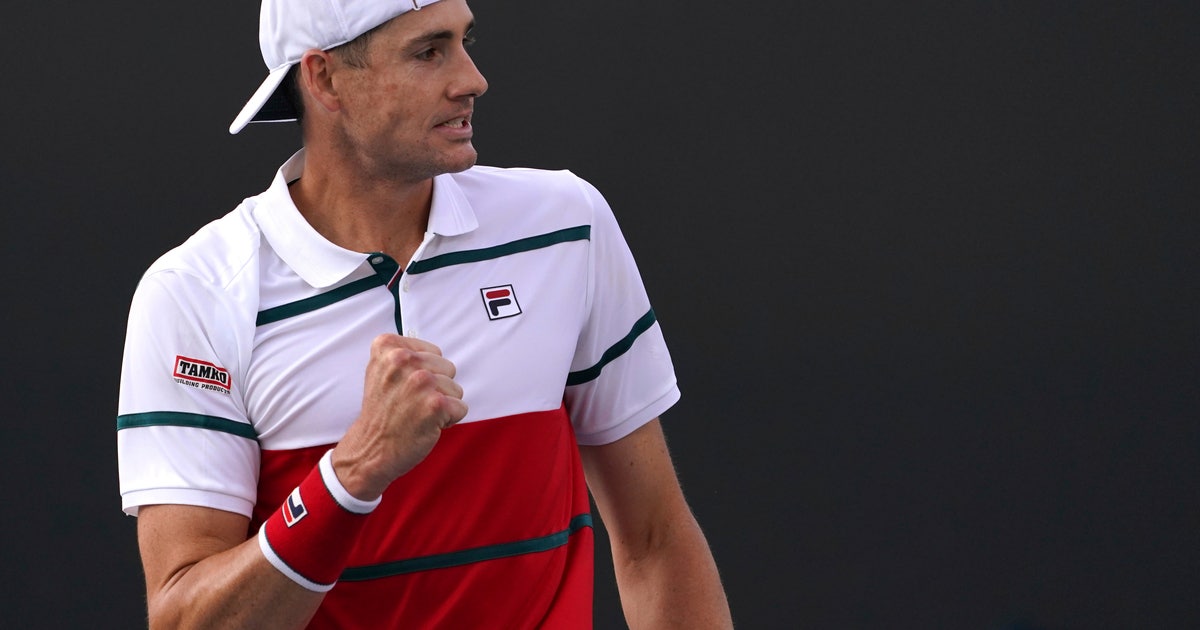 MELBOURNE, Australia (AP) — A quick look at the Australian Open:

They were born a month apart, two 34-year-olds who, as they would say in Australia, are as different as chalk and cheese. John Isner is tall and lanky, 10 inches taller in fact than Stan Wawrinka. The Swiss-born Wawrinka has won three Grand Slam singles titles, including the 2014 Australian Open. The closest the American Isner has come to winning a singles major was the semifinals at Wimbledon in 2018. Their divergent paths will merge in the third round at Melbourne Park. They haven’t played on outdoor hard courts since 2009 in Tokyo, when Wawrinka won. Isner has won three of their meetings since, including on clay at Rome in 2017. “We all know he is a very dangerous player, serving big,” Wawrinka said. “You don’t get a lot of opportunity. You need to stay strong, be aggressive, try to make him play as much as possible. That’s it. Stay positive.” Top-seeded Rafael Nadal plays Pablo Carreno Busta, Nick Kyrgios takes on Karen Khachanov and Alexander Zverev plays Fernando Verdasco in other men’s third-round matches. Second-seeded Katarina Pliskova plays Anastasia Pavlyuchenkova and unseeded American CiCi Bellis, playing on a protected following four surgeries on her arm, plays Elise Mertens.

STAT OF THE DAY: 8 — number of Grand Slam tournaments Serena Williams has played without winning adding to her 23 major singles title.

QUOTE OF THE DAY: “I think it’s fitting that my last match should be a three-setter, a grinder, and finish with a forehand error. These are things I’ve been working on my whole career, but I guess it was just meant to be” — Caroline Wozniacki smiles through her tears in a court-side interview before she heads into retirement.

‘Emily in Paris’ Viewers Can’t Stop Mocking the Show, Now Read The Creator’s Defense for All Those Clichés

Biden, under pressure on ‘court packing,’ says he would convene commission on reform

6 ways to treat yourself to frozen coffee this...

July means its officially iced coffee season. Iced coffee on a hot day has been a way of life for as long as...
Read more

Popular podcaster Joe Rogan announced Tuesday he's moving "The Joe Rogan Experience" exclusively to Spotify starting in September."I am not going to be an employee of Spotify. We're going to be working with the sam...
Read more

Remember when Maggie Cheung enraptured audiences with her colorful...

Director Wong Kar-Wai's 2000 movie "In the Mood for Love" is a slow-burning, claustrophobic and visually stunning tale of illicit romance. The film, which premiered at Cannes 20 years ago today, is lauded for its tight plot, pitch-perfect score, lush cinemato…
Read more

Minnesota Gov. Tim Walz said Saturday that he would fully mobilize the Minnesota National Guard for the first time since World War II to bring an end to the "wonton destruction" caused in the protests after the death of George Floyd.
Read more

Ohio State University has announced it will be nixing spring break from its academic calendar in 2021 over concerns about exposure to COVID-19.In a recent letter to students, faculty and staff, the school's executi...
Read more

Sia reveals she adopted teen boys who were aging...

The singer who doesn't like to show the world her face is giving us a glimpse of her heart.
Read more

Food deserts, or neighborhoods where residents have limited access to a grocery store, exist in every U.S. state. The coronavirus pandemic is making that scarcity even worse. NBC News’ Blayne Alexander talks to Americans trying to bring fresh fruits and veget…
Read more

Lost your job? Here’s what you need to know

The Africa Centers for Disease Control and Prevention says an Africa-wide study of antibodies to the coronavirus has begun, while evidence from a smaller study indicates that many more people have been infected than official numbers show
Read more

On a recent Friday afternoon, a handful of high school students in Philadelphia met over video chat from their respective homes to dissect the lyrics of songs by jazz musician Billie Holiday and rapper J. Cole.
Read more

Vice President Pence and Sen. Kamala Harris (D-Calif.) dodged and weaved their way through a largely cordial debate on Wednesday night in Utah that was low on fireworks and heavy on policy.Debate moderator Susan Pa...
Read more

A Zimbabwean journalist who has been held in prison for more than a month has been denied bail for the third time, while police continue arresting government critics
Read more

Larry Bergner, administrator of the Newton County Health Department which serves the four districts, worried about potential mental health effects as a result of being kept at home and a lack of food in some students' homes.
Read more

These are the areas that propelled Trump to victory in 2016 - we ask them what they think of the protests.
Read more

President Buhari condemns the killings and vows to bring the gunmen to justice.
Read more

Graham slams FBI actions in Russia probe: ‘If that...

Trump’s snub over Obama portrait is part of a...

The President is suffering one political body blow after another. And his instinct, when cornered, is to fall back on what worked so well in 2016: disruption, distraction and division, writes Errol Louis. What is different is that Americans battling the Covid…
Read more

A Hispanic activist in New Mexico has started a campaign to censor Chicano studies because he's mad at the monuments being taken down.
Read more