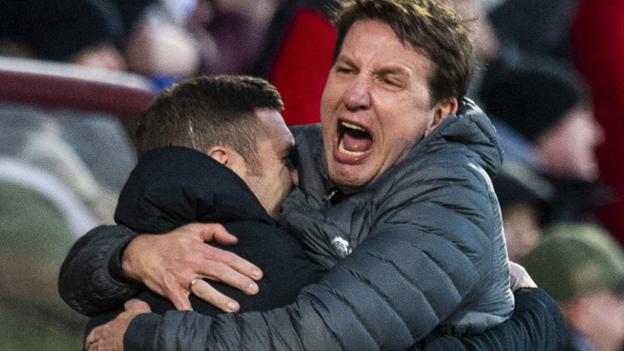 Steven Naismith scored against his former side

Steven Gerrard’s side, who remain five points behind Celtic, took the lead when Ryan Kent fired high into the net after the break.

But Hearts replied when Boyce set up Steven Naismith to chip home.

The midweek signing from Burton Albion’s deflected shot won it for the home side with seven minutes remaining.

Ending their run of 10 league games without a win, five of them at home, hands manager Daniel Stendel his first league victory and takes Hearts to within a point of Hamilton Academical.

Defeat in Gerrard’s 100th game in charge ends Rangers’ run of six consecutive victories and seven without a defeat.

‘Dynasty’ Season 4: Why Fans Should Expect a Big...

"Dynasty" has just released its most recent season on Netflix, but fans will have a long wait before Season 4 airs on the streamer and on The CW.
Read more

The top U.N. official in Libya is warning that the war in the north African country will “intensify, broaden and deepen” because of increasing foreign intervention and the massive influx of weapons, military equipment and mercenaries to both sides
Read more

Fifty-two percent of U.S. residents fear it would be "unsafe" to send children back to school, a new Quinnipiac University Poll has found.
Read more

Horace Grant denies he was source for ‘The Jordan...

Former NBA forward Horace Grant, who played with Michael Jordan in the early 1990s, vehemently denied he fed author Sam Smith information about the team for his book “The Jordan Rules.”
Read more

Our guide to the best Memorial Day sales of 2020 includes incredible deals on furniture, TVs, and appliances from retailers like Lowe's, Home Depot, Best Buy, and more.
Read more

Prince Harry and Meghan: Then and Now (Part 1)

Radio used by Titanic to call for help can...

NOAA argues the telegraph is likely surrounded "by the mortal remains of more than 1,500 people" and should be left alone.
Read more

Mark McVey was held in connection with the van theft but died in hospital on Sunday.
Read more

Key UN climate talks were due to take place in Glasgow in November 2020 but could now take place one year later.
Read more

How to avoid an IRS audit of your taxes

The agency zeroes in on only a fraction of taxpayers every year. Here's how to lower the odds of being one of them.
Read more

Israel’s Netanyahu, unbeaten in elections, is going on trial

Benjamin Netanyahu will once again make history after entering the record books last year as Israel’s longest-serving prime minister, when he becomes the country’s first sitting leader ever to go on trial
Read more

Wear a mask, hit the slots: An Idaho casino...

After being closed for more than a month, the Couer d’Alene Casino Resort Hotel re-opened on April 27 and it’s operations look very different.
Read more

President Trump took aim at one of his predecessor's Supreme Court picks during a press conference in India Tuesday morning, as he wraps up his trip to the country which included a visit to the Taj Mahal, a rally in front of over 110,000 people with Indian Pr…
Read more

Say Goodbye To Spitting in Baseball

As seen on "The Greg Gutfeld Show" Greg and his panel discuss media backlash to business reopening, live events returning and what they will miss about baseball.
Read more

We're coming off a half-century of entitlement and radical individualism. Now the statist dream may be coming fully true. The post After Coronavirus, Tyranny Comes in Stark, Technocratic Forms appeared first on The American Conservative.
Read more

‘House did not do their homework,’ GOP senator says on impeachment