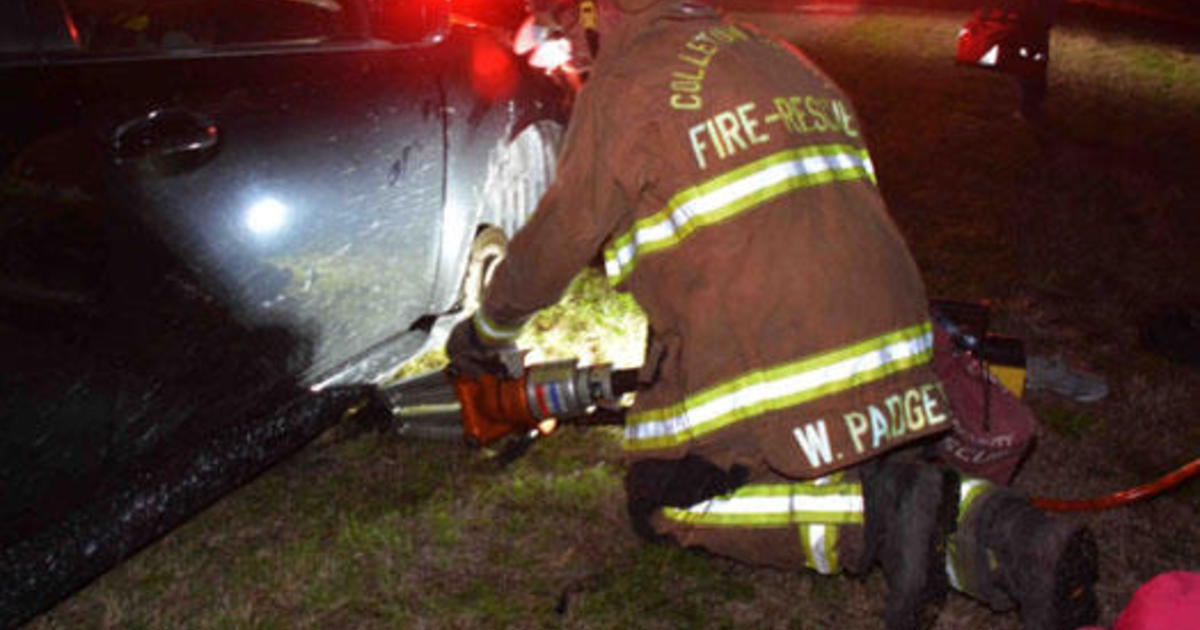 Walterboro, South Carolina — A woman whose hands were crushed while she was changing a tire on the side of an interstate in South Carolina managed to call for help using her toes.

The unnamed woman, 54, got a flat tire while driving on a rural stretch of I-95 Sunday evening, Colleton County Fire-Rescue said. She’s a Charlotte resident, reports the CBS affiliate there, WCSC-TV.

A jack holding up the car slipped while she was putting on the spare tire, causing her hands to get stuck between the tire and the fender, fire-rescue officials said.

First responder iln Colleton County, South Carolina on side of I-95 after woman who crushed her hands changing a flat tire called 911 using her toes on February 2, 2020

“She was trapped alone on the side of the dark interstate, experiencing excruciating pain,” CCFR officials told WCSC.

Over the next 45 minutes, they said, she managed to slide off her shoe, manipulate her cell phone and call 911. Fire-rescue crews were nearby clearing the scene of another incident and arrived in less than 10 minutes, officials said.

She suffered severe injuries to both hands and all her fingers, fire-rescue crews said. She was treated for her injuries and given pain medication before being transported to a hospital. Her current condition wasn’t known.

Sen. Tim Kaine: US strike on Soleimani was not...

Senate Armed Services Committee member Tim Kaine, D-Va., told Fox News Wednesday the drone strike that killed Iranian Gen. Qasem Soleimani was not covered under the George W. Bush-era Authorization for the Use of Military Force (AUMF), as was the case for mil…
Read more

Official outside Charleston, South Carolina says, "She was trapped alone on the side of the dark interstate, experiencing excruciating pain."
Read more

Coronavirus: UK tells all Britons to leave China 'if they can'

US airport official asks 'how is this going to work?' as confusion...