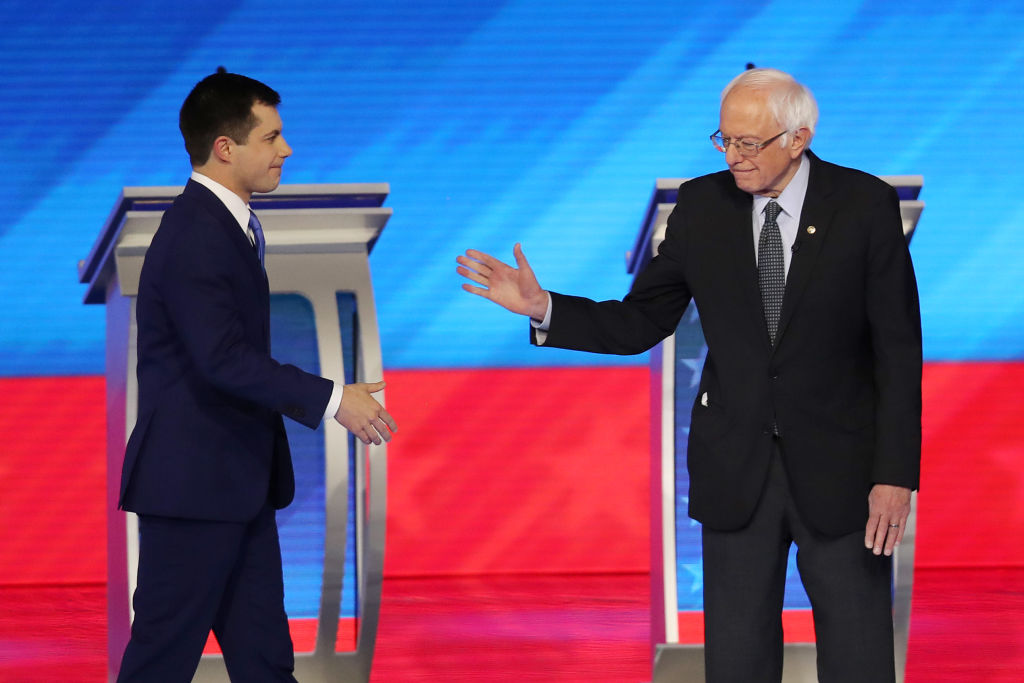 Buttigieg and Sanders have emerged as the early front-runners following the Iowa caucuses last Monday. While Sanders won more than 2,600 more votes than Buttigieg in the final round of voting, the former mayor won 0.1 percent more “state delegate equivalents,” giving him a technical win in the state. Both candidates have claimed victory.

All the most recent polls in New Hampshire have shown Sanders as the front-runner among Democratic voters in the state. The polls have varied, however, in the gap they have shown between the Vermont senator and Buttigieg, who has been consistently polling in second place. Overall, an aggregate of polls has shown Sanders with an average of 26.7 percent support while Buttigieg is several points behind with an average of 21.5 percent.

An Emerson poll released this weekend found Sanders with a commanding lead at 30 percent in New Hampshire, compared to Buttigieg at 20 percent. But a Boston Globe/Suffolk survey found a much-narrower gap between the contenders, with Sanders at 24 percent followed close behind by Buttigieg at 22 percent.

Biden, who only came in fourth place in Iowa and is expected to do poorly in New Hampshire, still appears to be the favored candidate among Democrats nationally. The Real Clear Politics aggregate of recent polls shows the former vice president with an average of 27 percent support, followed by Sanders with 21.8 percent. Warren comes in third with 14.4 percent, while Buttigieg only has the backing of about 7 percent of Democratic voters.

Following Iowa, Morning Consult survey data showed that 52 percent of Democratic voters were now “more likely” to vote for Sanders. Enthusiasm was much lower for Buttigieg, with just 38 percent saying they were “more likely” to back the former mayor.

The Swords of Justice will appear in Raids during the event.
Read more

Brazil’s President Jair Bolsonaro has tested negative for the new coronavirus, according to a post on his official Facebook profile
Read more

Can I Change My Vote? Trump Tweets ‘Go Do...

The president claimed those searching about changing votes want to switch their support to him in the election.
Read more

A new leak suggests that if you have iOS 13 on your current iPhone, Apple may be set to give you iOS 14 later in the year.
Read more

Twitter Torches Dallas Cowboys After Losing to Eagles and...

The only touchdown the Dallas Cowboys made this weekend was their plane landing in Pennsylvania, one tweet stated.
Read more

Watch This Snake Befriend His Rat Dinner Instead of...

You have to see this video of them cuddling.
Read more

Crown Estate Scotland says it could lead to billions being invested as part of a green recovery.
Read more

Democrats ramp up pressure on Lieberman to drop out...

Democrats have begun ramping up pressure on Georgia Democrat Matt Lieberman to drop out of the race for one of the Peach State's two Senate seats up for grabs this year, citing concerns that he may cost the party a chance...
Read more

CDC warns of ‘distressing trend’ in Covid-19 cases as...

Covid-19 case numbers are rising across the majority of the country. The CDC held a rare public briefing to encourage mask-wearing and physical distancing.
Read more

Veteran NASA astronauts to be first to launch from...

NASA astronauts Bob Behnken and Doug Hurley will be the first to fly SpaceX's new spaceship on the historic test flight to the International Space Station. Mark Strassmann speaks with Behnken and Hurley.
Read more

Celtic 3-0 Motherwell: Lennon’s side bounce back from Champions...

Celtic bounced back from their midweek Champions League exit with a Scottish Premiership victory over belligerent Motherwell.
Read more

How to transform any room into your own home...

From projectors to comfy couches, we're helping you elevate the home-viewing experience beyond flipping a light switch, with picks from interior design experts.
Read more

DeShawn Bojgere faces up to five years in jail if found guilty of the delay or destruction of mail charge.
Read more

F-35 crashes at Florida Air Force base in second...

An F-35 fighter jet crash landed at Eglin Air Force Base in the Florida panhandle Tuesday night, the Air Force said Wednesday, in the second aircraft crash at the base in less than a week.The F-35 pilot successfull...
Read more

President Trump on Friday appeared to acknowledge the possibility of losing the election to President-elect Joe Biden, after weeks of alleging election fraud without providing evidence. He has not conceded to Biden. Photo: Evan Vucci/AP
Read more

Hearts v Hibs; Who made your Edinburgh derby select?

How made your combined Edinburgh derby XI as the sides prepare to meet in the Scottish Cup semi-finals?
Read more

Voter fraud, suppression and partisanship: A look at the...

With nine days left until Election Day, many Americans hope the race finishes smoothly — unlike the disputed election of 1876. As the United States celebrated the centennial of the Declaration of Independence, a heated competition between Republican Rutherfor…
Read more

President Trump on Thursday claimed Republicans “didn’t want to ask” for a payroll tax cut in the next coronavirus bill due to Democrats’ objections to his top ask for the stimulus package, saying they are “hurting” Americans “as usual.”
Read more

Mayor Sadiq Khan said he was setting up a commission to ensure the British capital's monuments reflected its diversity.
Read more

Kirstie Alley, Tito Ortiz and More Celebrities Who Made...

The Twitter alternative continues to gain conservative users, including the rich and famous.
Read more

Chris Hayes says he was ‘strictly forbidden’ from watching...

MSNBC's Chris Hayes shared on Twitter on Wednesday that he was "strictly forbidden" by his mother from watching "The Dukes of Hazzard" as a small child because of the Confederate flag displayed on the signature car in the...
Read more

Senate Majority Leader Mitch McConnell (R-Ky.) said on Tuesday that a forthcoming Republican coronavirus proposal will include more than $100 billion for schools.Republicans view help for schools - which are weighi...
Read more

"We haven't been given a lot of reason to trust the system," said one Black mom. "Why would we trust it now, and with our most precious thing: our child."
Read more

Man dies and another injured in two-car crash in...

The 47-year-old driver of an Audi A4 died after it collided with a Ford Fiesta on the A198 in East Lothian.
Read more

Childhood friend of Kamala Harris reflects on her groundbreaking...

Senator Kamala Harris of California will make history tonight as she accepts the Democratic nomination for vice president. Carole Porter, a childhood friend of Harris, joins CBSN to talk about how their experiences growing up led to this historic moment.
Read more

The president is starting to punish China on everything, including issues that have been long-standing points of friction but that Trump often avoided.
Read more

Delta reunited this little girl with her doll after her mom's plea...

Sanders: 'Not my impression' DNC was trying to hurt campaign