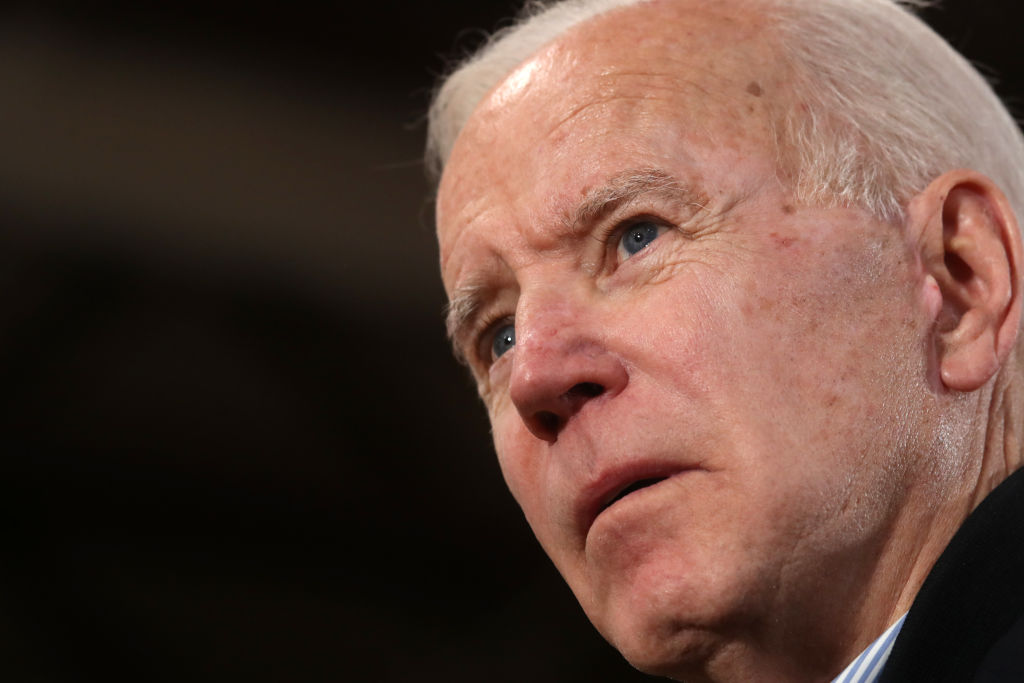 Biden made the bizarre remark during a campaign event in New Hampshire on Sunday. After the young woman, Madison Moore, asked the former vice president about his Iowa failure and why voters should have faith that he can win in the national election, Biden asked her if she’d ever been to a caucus.

While Moore suggested that she had, Biden pushed back. “No, you haven’t. You’re a lying dog-faced pony soldier,” he said. The candidate then went on to argue that Iowa’s “confusing” results are not a good indication of a candidate’s viability.

“A lot of what he’s saying, it seems to be really pathos-based and very sad,” the 21-year-old college student said, according to a clip of her comments that aired Monday morning on Fox & Friends. “We’ve heard a lot about deaths and cancer and people losing their jobs. And to me, he doesn’t seem very solution-oriented.”

She added, “I don’t think he has the momentum to carry this to a national election.”

Although many were confused by Biden’s unusual choice of words, a spokeswoman for his campaign tweeted out an explanation.

“It’s from a John Wayne movie, and he’s made it plenty of times before. Sorry to ruin the fun twitter!” Remi Yamamoto wrote. Wayne is probably best known for his roles in Western films.

Biden previously used the line at a November 2018 rally for former Senator Heidi Heitkamp, a Democrat from North Dakota, USA Today reported. The former vice president explained at the time that the line was used “in a John Wayne movie where the Indian chief turns to John Wayne and says, ‘This is a lying dog-faced pony soldier.'”

As Moore noted in her question to Biden, he performed poorly in last week’s Iowa caucuses. Although the results have not been finalized, Biden came in a distant fourth after former Indiana mayor Pete Buttigieg, Senator Bernie Sanders and Senator Elizabeth Warren. Senator Amy Klobuchar was close behind Biden in fifth place.

Polls in New Hampshire have shown that support for Biden has tanked ahead of the state’s Tuesday primary. A new Emerson College poll showed him in fifth place, with only 10 percent support while Warren is in fourth place with 11 percent. Sanders is in the lead with 30 percent, followed by Buttigieg at 23 percent and then Klobuchar at 14 percent.

The latest entry in the company’s legendary M-series is a luxurious camera for a different world.
Read more

The most interesting takeaways from how 2020 candidates spent...

By the time multibillionaire Mike Bloomberg suspended his self-funded campaign after three months, we knew he had spent at least $510 million. But...
Read more

Bitcoin Cash “halving event” could cause many miners to...

Fans in the State of Hockey can officially add Minnesota Wild games to their calendars once again.
Read more

Interfaith group: No Buddhist or Hindu statues in nightclubs

Rep. Tulsi Gabbard (D-Hawaii) Wednesday dropped a defamation lawsuit against former Secretary of State Hillary Clinton, ending a brief legal battle over allegations that Gabbard was being supported by Russia. The lawsuit was filed...
Read more

"If you look at the evolution of the virus in bats and what's out there now, [the scientific evidence] is very, very strongly leaning toward this could not have been artificially or deliberately manipulated," Fauci said.
Read more

"I'd really encourage people to think about that if you're an employer and in a position to do so," New Zealand's prime minister said.
Read more

Bipartisan GROCER Act would give tax break to frontline...

These workers have put themselves in harm’s way, day after day, to keep us all fed during the most serious crisis our nation has faced since 9/11. Many of us have been able to do most of our work from the safety of home, but the nature of these workers’ jobs …
Read more

Apple’s Homepod speaker gets a $100 price cut ahead...

Just ahead of the Memorial Day sales event, you can score a $100 price cut on the Apple Homepod smart speaker at Best Buy.
Read more

The U.S. Census Bureau has mailed out a second round of notices reminding people that they can participate in the 2020 census
Read more

Avisail Garcia has been a welcomed newcomer to the Milwaukee Brewers this season.
Read more

Destiny 2 players will get a 4K upgrade for...

Destiny 2 is coming to PS5 and Xbox Series X and current players can upgrade to next-gen console versions for free to enjoy 4K 60fps gaming on both.
Read more

Trump swipes at Cheney as she faces criticism from...

President Trump on Thursday took a swipe at House GOP Conference Chairwoman Liz Cheney (Wyo.) and amplified accusations from other Republicans that Cheney is working against the president's agenda.
Read more

"Whatever they ask, I would oblige," Giles said. "Because what was going on at the time was not OK."
Read more

What you need to know about Covid talks

An online sermon being delivered by a senior British clergyman was derailed when an intrepid cat wandered between his legs and disappeared into his robes.
Read more

Portland mayor caught up in tear gas at BLM...

Newsom: 'Trump is scared of California,' the 'most un-Trump state in America'