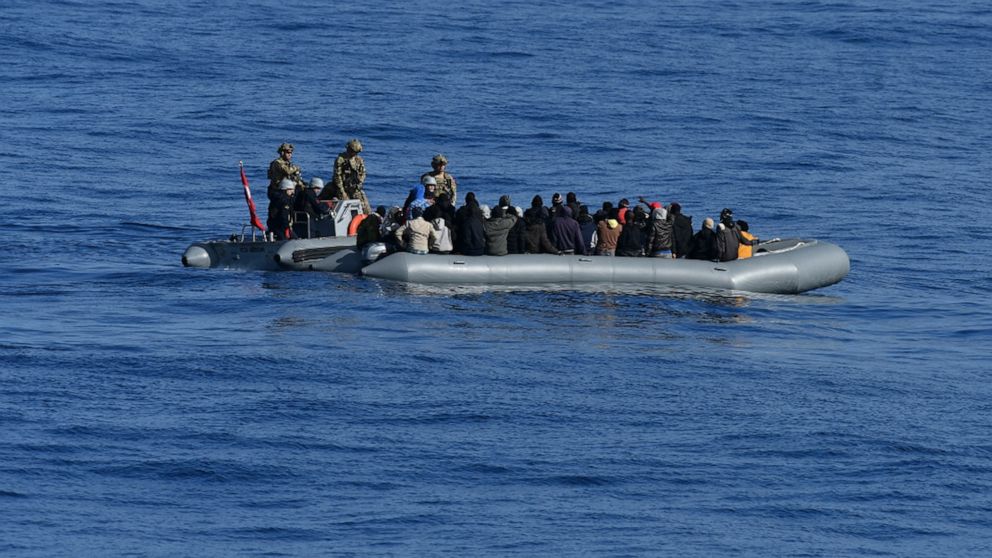 The Libyan coast guard apprehended 81 migrants off the coast of Libya and returned them to the capital of the war-ravaged country, the U.N. migration agency said Tuesday.

The International Organization for Migration said that the coast guard plucked the migrants, among them 18 women and four children, from the Mediterranean late Monday. Back in Tripoli, the agency offered the migrants emergency medical assistance. It was not clear where the migrants were from.

The U.N. refugee agency reported last week that the total number of migrants intercepted by the Libyan coast guard in the past month rose 121% from the same period last year.

Libya, which sits on Africas Mediterranean coast, has become a major conduit for migrants seeking refuge in Europe from war and poverty in Africa and the Middle East. The European Union, looking to keep the migration crisis off its shores, trains and funds Libyas coast guard to catch the jam-packed boats and return them to the country, where migrants often land in detention centers run by the interior ministry of Libyas U.N.-backed government.

The facilities, rife with abuses, face criticism from human rights groups over their dangerous conditions, especially as fighting between eastern-based forces and the Tripoli government creeps close to the centers.

Hundreds of migrants had moved into Abu Salim after fleeing another detention center, housed within a large military complex, which came under attack last July. That airstrike killed at least 50 people and injured over a hundred others, ranking among the deadliest assaults on civilians in the war and turning a spotlight on the many perils migrants face in facilities near the front lines.

In its statement Tuesday, the IOM reiterated that coordinates of detention centers filled with civilians are known to the warring sides.

Dr. Anthony Fauci, the nation's top infectious disease expert and a member of the White House coronavirus task force, shot down theories that the virus was man-made or released accidentally from a Chinese lab in a new int...
Read more

A collection of Seattle businesses, property owners and residents is suing the city over its tolerance of an “occupied” protest zone, saying officials have been complicit in depriving them of their rights to their property
Read more

Hone your Adobe CC skills with lifetime access to...

Adobe has a number of programs used by professionals around the world to create and edit photographs, graphic designs, motion graphics and visual effects for video.
Read more

More than 10 million people across the globe have been infected with the novel coronavirus, according to a Johns Hopkins University database.The global tally surpassed the 10 million mark on Sunday, as countries su...
Read more

New Zealand barber snips away at midnight as nation...

Authorities in Iran have arrested a man accused of beheading his 14-year-old daughter in an honor killing that has sparked widespread outrage in the Middle Eastern country.
Read more

‘Twin Peaks’ and the Dark Motivations of Suburban NIMBYs

Watch this cult-classic mystery drama to learn what drives obstructionism and misguided environmentalism. The post ‘Twin Peaks’ and the Dark Motivations of Suburban NIMBYs appeared first on The American Conservative.
Read more

QB of the future? RB of the present? Steelers...

"It's possible there will be some because you won't be locked into an apartment or a house or whatever it is," President Donald Trump told ABC News in an interview on Tuesday.
Read more

Java beats Python to remain the most popular programming...

Developers continue to use Java and other popular programming languages but many plan to adopt new ones as well.
Read more

Aberdeen thank their supporters as nearly 5,000 season tickets are sold for next season.
Read more

Astronauts are spending Father’s Day in space watching the...

Some dads are cool, but others are simply out of this world.
Read more

Editor In Chief Of The Dispatch and Fox News Contributor Jonah Goldberg sounds off on the "stay at home" protests taking place around the country at city and state capitals. Goldberg called the media coverage of the protests "Overblown". Adding the protests d…
Read more

Sports stadiums are finding creative ways to cater to...

Professional sports franchises are converting their fields into drive-in movie theaters — and even listing their entire facility on Airbnb.
Read more

Fans turn up heat for ABC’s canceled ‘Baker and...

With cries for equality and justice ringing in the streets, a petition drive to rescue a canceled television series may seem inconsequential
Read more

Visualizing Whether Or Not Your Hospital Is At Risk...

Amid the covid-19 pandemic, pinpointing the number and location of ICU beds, ventilators and doctors with specialized training is critical for local, state and federal officials trying to forge an effective response.
Read more

UK’s Johnson in June pledge for rollout of contact-tracing

The British government pledged to have a “test, track and trace” program for the coronavirus in place by June 1
Read more

Two churches in Georgia and Texas that reopened recently amid the novel coronavirus pandemic have since closed their doors again after churchgoers and religious leaders tested positive for the virus, according to multiple...
Read more

EU unveils plans to save vacations and avoid a...