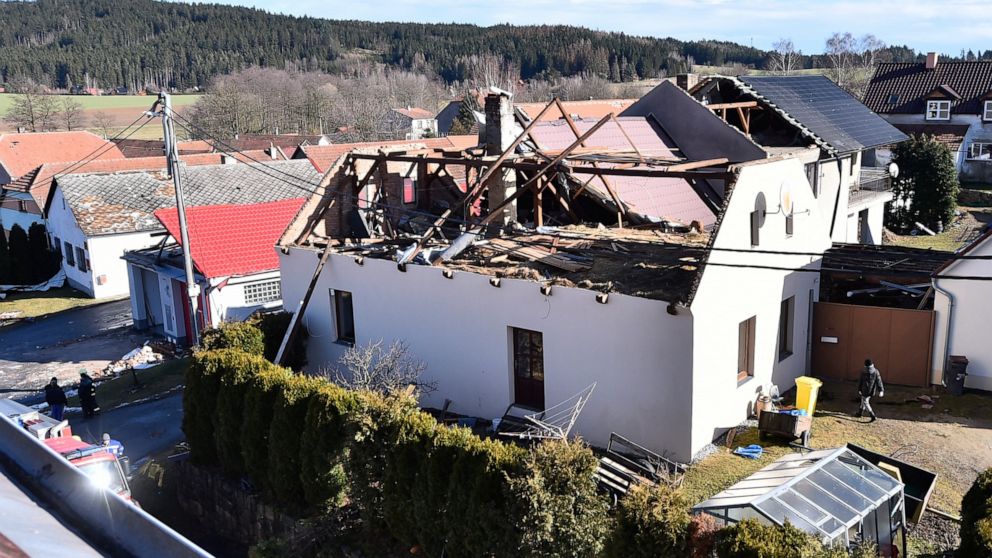 In Austria, the city of Salzburg near the German border was hit by the storm Tuesday. Public broadcaster ORF reported that more than 400 firefighters worked for hours to remove downed trees from crushed cars and roads. They also had to remove a huge metal roof that was blown off a building. No one was injured, ORF reported.

German railroad operator Deutsche Bahn, which had shut down all long-distance trains on Monday, said most of its service resumed Tuesday with the exception of some trains in southern regions that were still being battered by gusty winds. Schools across Germany reopened.

Deaths due to the fierce storm were reported in Poland, Sweden, Britain, Slovenia, Germany and the Czech Republic.

In northern Bavaria, where a gust of over 160 kph (100 mph) was recorded, the storm produced a record amount of electricity being fed into the German grid from wind turbines, equivalent to almost 44 nuclear power plants.

In England and Scotland, the Met Office national weather agency still had 85 flood warnings in force as torrential rains caused numerous rivers to overflow their banks.

Prince Charles out of self-isolation after testing positive for coronavirus

Beat this price: Kogan slashes AU$90 off a pair...

Kogan has reduced the price of a pair of Beats Solo 3 by AU$90.
Read more

Sherry Cola from Freeform’s ‘Good Trouble’ and Elle Paris Legaspi from Freeform’s “Party of Five” took a break from shooting their TV shows to embark on a Disney Cruise Line sailing out of Miami to the Caribbean aboard the Disney Magic!
Read more

Save big on SIM-free Google Pixel 4 and 4 XL deals with this major cashback offer.
Read more

How did ex-con get away with living in his...

Democrats begin to present case for Trump impeachment to...

House Democrats seeking President Trump's removal from office are beginning their arguments in the Senate chamber, hoping to convince the public if not GOP senators that the president should be convicted.Behind Rep...
Read more

This Christmas, the Christianity Today Editorial Was a Ray...

As a pastor myself, I have long felt betrayed by Evangelical support for Trump—a president who can be described as the anti-Jesus: living for pride, power, pleasure, and wealth, rather than faith, hope, love, and wisdom.
Read more