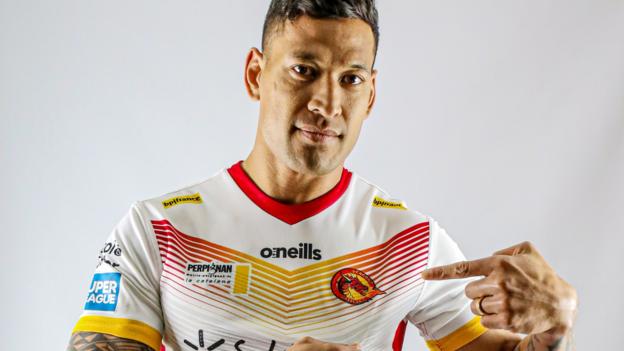 Israel Folau could make his Super League debut on Saturday after being named in Catalans Dragons’ 21-man squad to face Castleford Tigers in Perpignan.

The 30-year-old has been training with the French side for almost two weeks.

Speaking earlier this week, head coach Steve McNamara said Folau would play “when he’s ready to contribute positively to the team on the field”.

In an interview conducted by the Dragons shortly after his arrival in France, Folau made no reference to the off-field controversies that led to his dismissal by Rugby Australia and the outcry that followed his move.

“I’m excited to be back playing the game I grew up playing,” said Folau, who has not played a match of any description since April and has not featured in rugby league for a decade.

“I’m grateful for the opportunity to be part of a great organisation and a great team in Catalans.

“Being able to train with the team and work alongside the coaches, that’s something I’ve missed in the last seven months but it’s fantastic to be back in a team environment and getting into that routine of training hard again, enjoying the game and putting my best foot forward.”

Folau said “hell awaits” gay people in a social media post in April 2019. He subsequently had his contract terminated by Rugby Australia.

After an appeal against his dismissal failed, the cross-code international began legal action arguing that it was a case of religious discrimination. A settlement was reached with RA in December.

Catalans’ signing of Folau was met with widespread criticism within rugby league and, at a board meeting earlier this month, Super League voted unanimously to have “greater authority” to stop future “controversial signings”.

Folau was not included in the squad for Catalans’ season opener against Huddersfield nor last weekend’s scheduled match at Wakefield, which was postponed because of the effects of Storm Ciara.

Folau’s inclusion is the biggest selection headline before Saturday’s match, as Catalans bid to get their first victory of the season against a Castleford team that has won their first two Super League games in 2020.

Lewis Tierney has recovered from a facial fracture and could return for the Dragons, whose lengthy injury list includes fellow backs David Mead and Tom Davies.

Albert Heijn had asked staff to upload the photographs to an app to establish uniform sizes.
Read more

Queen Elizabeth II will formally open a new session of Britain's Parliament, with a speech giving the first concrete details of what Prime Minister Boris Johnson plans to do with his commanding new majority
Read more

Wilder has 30 days to demand a third fight against Fury, who ended his five-year reign as WBC heavyweight champion on Saturday night.
Read more