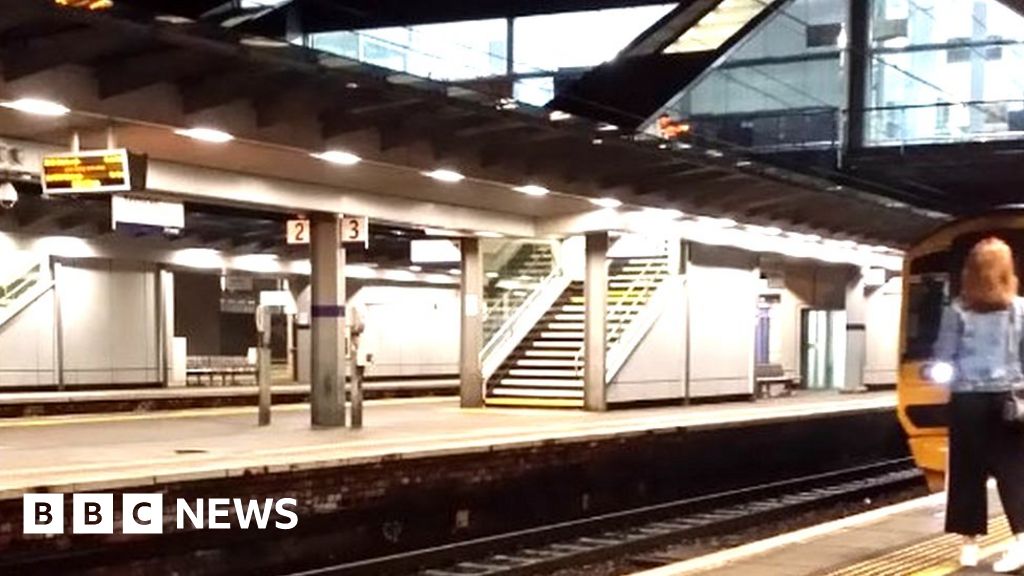 A man has been charged with attempted murder after a man was pushed down a staircase at an Edinburgh train station.

The incident happened at 09:55 on Thursday at Haymarket station.

The 58-year-old man suffered life-threatening injuries and was taken to Edinburgh Royal Infirmary where he remains in a critical condition.

A 35-year-old man has been charged with attempted murder and assault and is to appear at Edinburgh Sheriff Court.

A 32-year-old man was assaulted on platform two in the station. He is being treated for facial injuries.

Det Insp Brian McAleese, of the British Transport Police, said: “We believe a verbal altercation took place between three men on the stairs between platform two and three, which resulted in one of the men being pushed down the stairs and another assaulted.

“Thankfully officers were quickly on scene and a 35-year-old man was arrested.

“I’d now urge anyone who may have witnessed the incident or the events leading up to it to get in touch with us as soon as possible to assist with our enquiries”.

Erling Braut Haaland scored for Borussia Dortmund as they mark the return of the Bundesliga during the coronavirus outbreak with a convincing derby win over Schalke.
Read more

Coronavirus aid for undocumented immigrants in California kicks off...

Undocumented immigrants in California, who are not eligible for federal coronavirus aid, can apply to a public-private Disaster Relief Fund starting Monday.
Read more

Who is Ronan Farrow Dating?

The author of "Catch and Kill" has been dating "Pod Save America" cohost Jon Lovett since 2011.
Read more

Several MLB players opting out of season over coronavirus...

Numerous pro baseball players have announced plans to opt out of the 2020 MLB season due to concerns over the ongoing coronavirus pandemic and the protests over police brutality and racism that have engulfed cities across...
Read more

The Georgia Bureau of Investigation searched the home of two men charged in the death of Ahmaud Arbery, the agency said.
Read more

Investigators have been closely examining video evidence, and say the critical moment is when the shots are fired.
Read more

The young triathlete took her own life after lodging complaints over alleged abuse from coaching staff.
Read more

TV production does its part in conservative return to...

Is A Woman President Impossible? What I’ve Learned From...

In the bid for the Democratic presidential nomination in 2020, we saw six women make the case they would be the best-case scenario. Five of them had even won past elections on the road toward their candidacies, often more consistently than their male counterp…
Read more

Coronavirus: UK ‘quite likely’ to get close to or...

Grant Shapps says he is optimistic over the target, as the PM declares the UK is past the peak of the virus.
Read more

The effects of anything Congress does pass will likely not be felt for months to come, with potential legislation still weeks away from being approved. Still, some GOP senators said following a meeting with President Trump that there is growing acceptance amo…
Read more

A deadly virus that affects both domestic and wild rabbits has been reported in Nevada, according to local reports.
Read more

Centrist poll: ‘Medicare for All’ underwater in key battleground...

A new poll from a centrist Democratic think tank of three battleground states shows "Medicare for All" is far less popular than a plan to build off the Affordable Care Act.The polling from Third...
Read more

Tennis sensation Naomi Osaka has become the highest paid female athlete in history after earning $37.4 million over the last year, according to Forbes.
Read more

Trump lashes out at GM, Ford over ventilators

President Trump on Friday lashed out at General Motors and Ford, demanding via tweet that the two major automakers begin churning out ventilators to be used to treat patients with the coronavirus.Trump issued a seq...
Read more

The military commander of eastern Libya-based forces says they will continue fighting forces loosely allied with the U.N.-supported government in Tripoli
Read more

Happy Thursday and welcome to Overnight Defense. I'm Ellen Mitchell, and here's your nightly guide to the latest developments at the Pentagon, on Capitol Hill and beyond. ...
Read more

The man who allegedly delivered Michael Jordan's pizza before Game 5 of the 1997 NBA Finals, Craig Fite, joins Colin Cowherd today. Hear his story of how the delivery went down.
Read more

Donald Trump’s WHO Letter About China Explained: An Annotated...

President Donald Trump excoriated the WHO and its director-general in a letter about the agency's response to COVID-19 and handling of China. Here, Newsweek adds more context to the letter.
Read more

US: Taliban's 'reduction of violence' deal to start tonight