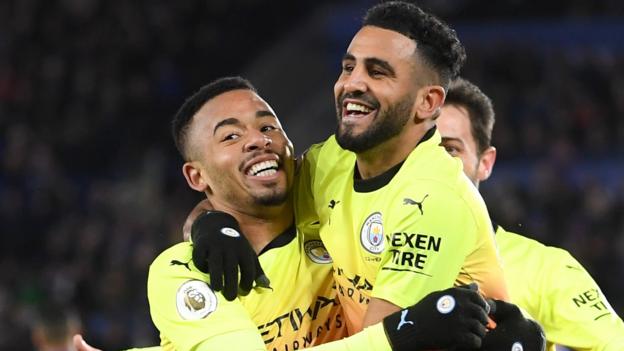 Substitute Gabriel Jesus scored an 80th-minute winner as Manchester City extended their advantage over Leicester to seven points in the battle for second spot in the Premier League.

It seemed Manchester City’s chance to earn an away win had gone when Sergio Aguero had his spot-kick beaten away by Kasper Schmeichel, after the video assistant referee ruled Dennis Praet had blocked Ilkay Gundogan’s strike with his arm.

But with 10 minutes of normal time remaining the visitors made the breakthrough when the Brazilian striker found the back of the net with a low strike from Riyad Mahrez’s through ball.

Striker Jamie Vardy went closest for Leicester when his clipped shot in the first half came off the base of the post, while team-mate James Maddison tested the reflexes of Ederson with a free-kick from 30 yards out.

“At a moment when the country should be reaping a safety benefit from less traffic, the roads are riskier, threatening to reverse traffic safety gains made over the last few years,” the safety report read.
Read more

CDC director will self-quarantine after contact with COVID-19 positive...

Robert Redfield, the director of the Centers for Disease Control and Prevention (CDC), will self-quarantine for two weeks after coming in contact with a person who tested positive for COVID-19 at the White House....
Read more

In Pete Buttigieg, the Establishment Finds Their Man

He isn't Donald Trump and he isn't a socialist. In America today, that may be just enough. The post In Pete Buttigieg, the Establishment Finds Their Man appeared first on The American Conservative.
Read more

Flaherty bested by Brewers in Game 1 as Cardinals...

Oakland mayor’s home vandalized ahead of vote against defunding...

Oakland Mayor Libby Schaaf's (D) home was vandalized in the early hours of Tuesday morning, shortly before she cast a deciding vote not to defund the city's police department. Around...
Read more

Why We Can’t be Friends with Our Allies

Biden talks about “friends and allies” as if they’re the same thing. They aren’t.
Read more

The buck stops here – or does it?

"60 Minutes" correspondent John Dickerson says the standard for judging presidential decision-making may be shifting, depending upon which president you ask.
Read more

Eye Opener: Black man dies after being restrained by...

There are calls for the firing and arrest of several Rochester, New York police officers after video was released showing them placing a hood over the head of a Black man who later died. Also, President Trump suggested North Carolina voters should vote twice …
Read more

Prince William Reveals How He Wants to Be Seen...

The Duke of Cambridge told a documentary film crew how he hopes his son will view him when the young prince is fully grown up and in his 20s.
Read more

Inside Oxford’s Vaccine saga: From Wild Hype to Sobering...

Once hailed as the world’s best hope, the Oxford/AstraZeneca vaccine trial hits a bump in the road—and that might be good news.
Read more

The novel coronavirus has claimed the life of a young Florida girl, with her death now marking the youngest COVID-19-related fatality in the state to date, according to health officials.
Read more

Arkansas continued its phased reopening Tuesday, as the number of new COVID-19 cases in the community is on the rise.
Read more

Here's a fact about the 2020 election: Texas is a swing state.
Read more

Sturgeon: Salmond may be angry I refused to collude

Nicola Sturgeon says Alex Salmond may be angry she did not "collude" to make sexual misconduct allegations "go away".
Read more

Wuhan’s New Hospitals Aren’t as Complete as You Might...

Chinese state media have publicized several new hospitals that have taken less than two weeks to build. WSJ’s Chao Deng visited one of the facilities quickly built from scratch to see just how complete and ready it is to accept patients. Photo: Chinatopix/Ass…
Read more

"To say we are living in unusual times is an understatement," Lindsey Graham said in a statement Thursday.
Read more

These couples are stuck thousands of miles apart because...

Couples desperate to reunite amid travel restrictions use hashtags like #LoveIsEssential to bring attention to their separations.
Read more

My sister died alone in a Rikers cell. Here’s...

America's use of solitary confinement is an international disgrace and a national mark of shame.
Read more

There are two different endings to the Aftermath story.
Read more

Democrats at all levels of government have "declared war on fun," and appear to be violating Americans' right to "the pursuit of happiness" enshrined in the Declaration of Independence, Laura Ingraham claimed Thursday.
Read more

The Trump administration's nearly $2 billion investment in Pfizer and a smaller German biotechnology company for a coronavirus vaccine is raising eyebrows among lawmakers and drug pricing advocates....
Read more

Danish aid workers stationed in the Balkans have collected testimonies from dozens of migrants alleging they were brutalized by Croatian law-enforcement officers when they tried to cross into the country, then summarily expelled
Read more

Nominated actors will have someone waiting outside their home to hand over an award if they win.
Read more

A judge in Michigan ruled to keep a 15-year-old girl in juvenile detention until September for violations, saying the case goes beyond unfinished homework and is about repeated violations and the need for the girl to finish counseling programs, despite protes…
Read more

‘Unsolved Mysteries’ Volume 2: Every Theory About Why JoAnn...

Although her death was ruled a suicide, Romain's family told " Unsolved Mysteries" they were very skeptical over the idea that this was how JoAnn's life ended.
Read more

The man, who had underlying health problems, had recently returned to the UK from Italy, NHS England says.
Read more

Ex-lovers of Johnny Depp come to his defense in...

It remains unclear if the woman knew she had COVID-19.
Read more