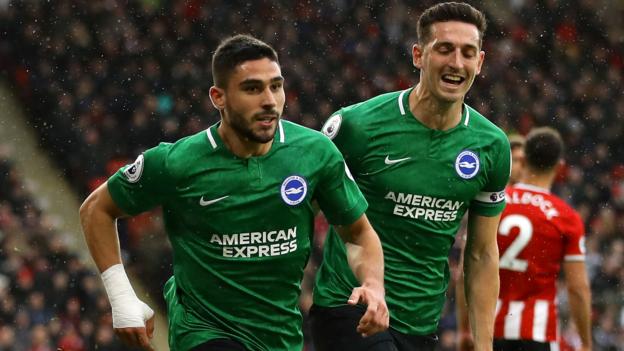 Sheffield United’s hopes of qualifying for Europe were frustrated as Neal Maupay marked his return to Brighton by equalising.

Enda Stevens’ rasping finish put the Blades in control but the lead was short-lived as Maupay got in front of Dean Henderson to nod the visitors level.

Lewis Dunk missed a glorious chance to put the visitors ahead after the Blades lost Stevens to injury.

John Fleck, who signed a new Sheffield United contract until 2023 before kick-off, went close from distance but Brighton were full value as they secured a third successive draw.

Everything We Know About The First Same Sex Couple...

The new season will premiere at the end of February.
Read more

It is past time for California to end its draconian coronavirus lockdown policies.
Read more

Coronavirus: Call for action over refunds for cancelled flights

Emily Liddle and George Ridley say they are about £2,000 out of pocket after a trip to Asia was cancelled.
Read more

The new album from the band Special Consensus was inspired by the National Barn Dance, a country and bluegrass show heard on a Chicago radio station from 1924 to 1968
Read more

California city declares itself a sanctuary for businesses: ‘We’re...

A California mayor is declaring a sanctuary for its businesses from the state's coronavirus shut down orders.
Read more

Many viewers expressed disbelief that the ad was ever allowed to air.
Read more

Louisiana Governor on Not Shutting Down Mardi Gras Over...

Governor John Bel Edwards reiterated Sunday that last month's Mardi Gras celebrations weren't cancelled or downsized because "not one person" at the federal level directed the state to take such action - but he said it's now time to move forward.
Read more

The biotech firm Moderna Therapeutics announced that the first eight participants in the Phase 1 of its COVID-19 vaccine trial developed some antibodies after a single dose. Moderna is now expected to start a second round of clinical trials as soon as next mo…
Read more

Over 100 police officers have died from COVID-19

Over 100 police officers in the U.S. have died from COVID-19 after fighting the virus on the front lines, according to a report from the Fraternal Order of Police (FOP) obtained by The Hill via email Thursday.The F...
Read more

Millions of 17-year cicadas will emerge in the South,...

Scientists say farmers should be prepared for the invasion, with up to 1.5 million of the insects emerging per acre, as they can pose a danger to crops.
Read more

Delirium ‘may be common’ in Covid seriously ill

Long stays in intensive care and being ventilated could increase the risk, researchers say.
Read more