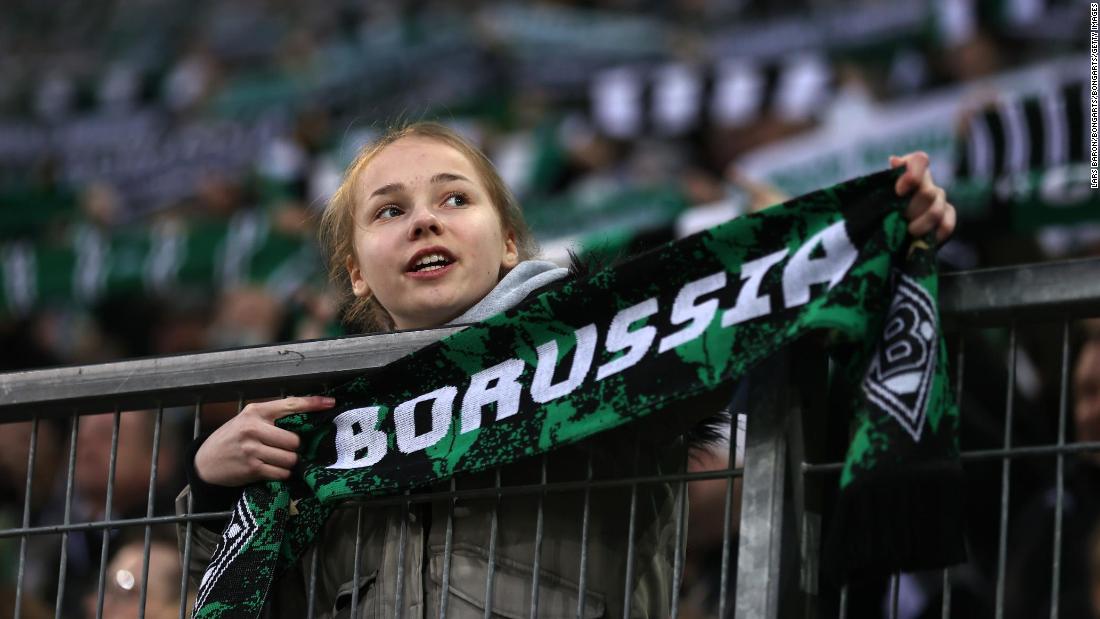 (CNN)While the outbreak of coronavirus has been causing havoc with sporting fixtures around the globe, a top of the table soccer clash in Germany remained unaffected, attracting a full house instead.

The highly anticipated game between the high-flying Borussia Mönchengladbach and Borussia Dortmund in the German Bundesliga was played Saturday night in Mönchengladbach’s Borussia Park.

A capacity crowd of 54,000 packed the stadium to see Dortmund win 2-1 — which moves it one point off the top of the table — according to the stadium’s website.

And all despite a large coronavirus outbreak just 10 miles (16 km) from the venue.

The district of Heinsberg has Germany’s largest number of coronavirus cases with more than 200 and Mönchengladbach is offering ticket refunds for people from the district.

For the fans that did attend the game, the stadium is asking fans to wash their hands often, cough into their elbows and avoid shaking hands.

The city of Mönchengladbach has seven confirmed cases of coronavirus with 143 people in home quarantine, according to the city government. However, officials decided to go ahead with the match because the city saw “no reason to stop sporting events.”

The novel coronavirus has killed more than 3,400 people, and infected more than 101,400, according to CNN’s tally.

While the spread of the coronavirus didn’t affect the game in Germany on Saturday, it has caused other sporting events to be disrupted.

Italy’s top-flight soccer league Serie A has postponed a number of games in recent weeks and played some games in empty stadiums.

The English Premier League announced Thursday that the traditional pre-match handshakes between players and officials will be scrapped until further notice.

Formula E’s Rome ePrix became the second race of the electric racing series’ season to be postponed after the Sanya ePrix in China was canceled.

The outbreak is causing concern about the 2020 Summer Olympics in Tokyo.

Olympics chief Thomas Bach says organizers are preparing for a “successful” Olympics despite the worries.

The man who allegedly delivered Michael Jordan's pizza before Game 5 of the 1997 NBA Finals, Craig Fite, joins Colin Cowherd today. Hear his story of how the delivery went down.
Read more

Italy suspends all domestic sport competitions in bid to...

All domestic sport in Italy has been suspended as the novel coronavirus outbreak shows no signs of abating.
Read more

Three videos piece together the final moments of George...

While many questions persist about George Floyd's killing -- namely why a Minneapolis policeman used lethal force while arresting Floyd -- three videos help stitch together the last minutes of the 46-year-old's life.
Read more

Canada's government is set to announce a ban on assault-style weapons following a deadly shooting in Nova Scotia this month that killed 22 people.Officials told ...
Read more

Michael Goodwin: America needs its own ‘Christmas Truce’ to...

In the long annals of war, tales of courage, slaughter and despair dominate, but one event stands out for its example of shared humanity: the spontaneous Christmas Truce of World War I.
Read more

Another One Bites the Dust of ‘Cultural Appropriation’

Author Jeanine Cummins finds out the hard way that she's not Latina enough to write novels about Mexican women. The post Another One Bites the Dust of ‘Cultural Appropriation’ appeared first on The American Conservative.
Read more

Two Intellectual Giants Who Didn’t Kow-Tow to the Leftist...

Michael Bay producing pandemic movie, will be first to...

Michael Bay is poised to begin production on the first movie to shoot in Los Angeles since the COVID-19 pandemic lockdown began.
Read more

The LTA is putting aside up to £20m to help tennis venues, coaches, officials and players through the coronavirus pandemic.
Read more

Here’s What John Krasinski Has Said About Selling ‘Some...

"I would love to keep doing the show from my office forever," Krasinski explained. "It just wasn't sustainable."
Read more

Trump calls Pelosi a ‘sick woman’ after her remarks...

President Trump criticized House Speaker Nancy Pelosi (D-Calif.) on Tuesday, calling her a "sick woman" and a "waste of time" after the lawmaker labeled him "morbidly obese" in a television interview a day prior."I...
Read more

A new study says that while autonomous vehicle technology has great promise to reduce crashes, it may not be able to prevent all crashes caused by humans
Read more

Missouri executes first US inmate put to death during...

Missouri carried out the first execution in the country Tuesday since the rapid escalation of the coronavirus outbreak in the US.
Read more

How to watch The Blacklist season 7 finale online...

Get ready for an episode unlike any other - here's how to watch The Blacklist season 7 finale online from anywhere.
Read more

An online sermon being delivered by a senior British clergyman was derailed when an intrepid cat wandered between his legs and disappeared into his robes.
Read more

Paulina Porizkova might be feeling the beach blues while in quarantine.
Read more