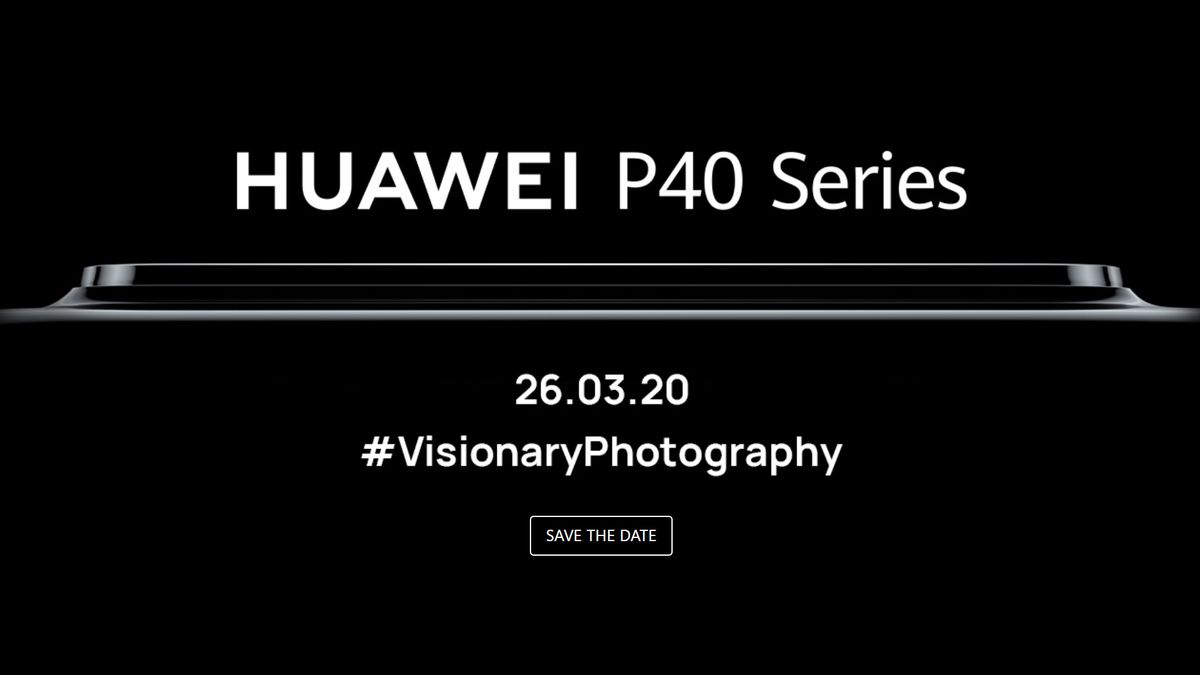 We already knew the Huawei P40 was set to launch on March 26 thanks to a comment made by company CEO Richard Yu, and now the company has put out an official teaser confirming as such although it seems to be an online-only launch now, not in Paris as we thought.

This teaser – posted on Huawei’s website – doesn’t give away much about the phone, but it does show us a few things that hint at the devices’ strong points although anyone who knows Huawei phones won’t exactly be surprised.

Between the side-on view of what seems to be a smartphone camera bump and the hashtag ‘#VisionaryPhotography’, it’s clear that Huawei is once again branding its P-series phone around its photography power.

Since Huawei advertises all these phones by saying the ‘P’ stands for ‘photography’, that’s not exactly a surprise.

The aforementioned camera bump looks rather long, so this could be the Huawei P40 Pro or even rumored P40 Pro Premium Edition we’re looking at, as theyll pack many cameras. Weve heard the base device will pack three rear cameras, with the other devices boasting more, although we dont know how many at this time.

It’s worth noting that while the event teaser shows a date, there’s no time or location for this launch event. However when you click the ‘Save the Date’ icon you’re prompted to add an event to your personal calendar referred to as an ‘Online Global Launch Event’, suggesting there won’t be a physical event.

This would be a bit of a surprise given Huawei typically launches the P-series phones in Paris, but with coronavirus concerns shuttering physical phone launches left, right and center, it certainly makes sense.

TechRadar will be covering the event and testing out the Huawei P40 phones when we can, so stay tuned for all you need to know about Huawei’s new phones.

Who competes, beats or faces defeat compared to BT? These are the best fibre broadband deals currently available.
Read more

"If there's ever been a better time for Sonya Deville as a character, I think this is it. It's her chance to grab that brass ring."
Read more

The surge in coronavirus cases is putting a severe strain on hospitals around the country. David Begnaud is in Miami, which is seeing its ICUs fill to near capacity.
Read more

Dwayne "The Rock" Johnson has announced that his production company will resume shooting the Netflix film "Red Notice" in a "quarantined bubble" next month.
Read more

Many, many Americans won't make themselves heard in the remaining caucuses and primaries, let alone the presidential election, without a drastic intervention.
Read more

The library in Ghana showcasing the best of African...

The Library of Africa and the African Diaspora in Ghana is open to those curious to learn more about Africa’s literary history.
Read more

"Beijing will not turn into a second Wuhan," one city official has vowed amid fears of a possible 2nd wave of coronavirus infections.
Read more

The head of Iran’s Revolutionary Guard warned the U.S. and its allies as he addressed a pro-government demonstration denouncing last week’s violent protests over a fuel price hike
Read more

Draymond Green is picking LeBron James and the Los...

LeBron James among athletes speaking out after George Floyd’s...

"Do you understand NOW!!??!!?? Or is it still blurred to you??" James said in an Instagram post.
Read more

As coronavirus rages on, the opioid epidemic does too

Since the arrival of COVID-19, in-person meetings and community connection, a huge part of post-addiction recovery, has become much more difficult.
Read more

Turn your stress baking up a notch with these...

When phrases like "social distancing," "flatten the curve" and "shelter in place" have you holed up at home and feeling anxious, you may...
Read more

China put pressure on WHO to scale back coronavirus...

The CIA believes China tried to prevent the World Health Organization from warning other countries about the novel coronavirus outbreak in January as it worked feverishly to stockpile medical supplies from countries around the world, including the United Stat…
Read more

The Environmental Protection Agency (EPA) on Wednesday finalized a rule that will speed up the process for reviewing industry permits in a move critics say will limit communities' ability to fight them.
Read more

More than 50 residents of a Massachusetts nursing home have died from the novel coronavirus, the latest of a series of outbreaks in such facilities.In addition to the deaths, 117 residents and 42 staffers at the Co...
Read more