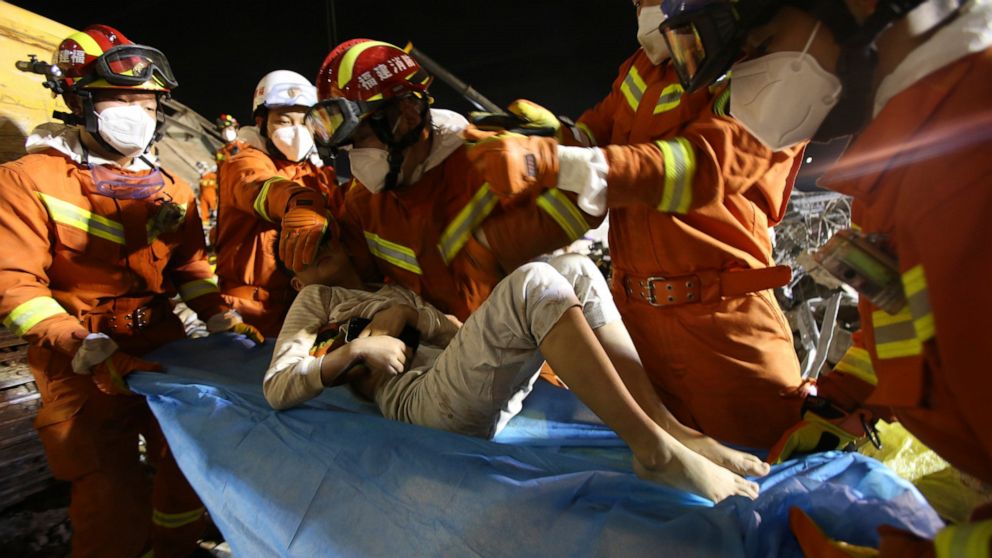 A 10-year-old boy and his mother have been rescued 52 hours after being trapped in the collapse of a virus quarantine site in southeastern China.

Video released by rescuers showed the two being pulled from the debris of the hotel that collapsed on Saturday. The location of the boy and woman was discovered late Monday night and they were freed around midnight after three hours of painstaking digging.

The hotel in the city of Quanzhou had been a quarantine site for people exposed to the new coronavirus.

The death toll in the collapse rose to 18 on Tuesday, with 12 people missing. A total of 71 people had been inside the hotel when it crumbled in mere seconds. The cause is still under investigation, although structural work being done on the lower level is suspected.

Most parts of China are quarantining people from high-risk areas or even those who traveled abroad or simply outside their home regions areas for 14 days.

Construction on the building began in 2013 and it was converted into an express hotel in 2018.

Two supermarkets on the first floor were being remodeled, and a pillar reportedly deformed a few minutes prior to the collapse, the official Xinhua News Agency said Sunday, quoting a district official.

The suspension has sparked debate on Twitter as users discuss whether the NYT's decision is fair.
Read more

Pramila Le Hunte: ‘I tried to be the first...

Winning as a Tory in Birmingham Ladywood in 1983 was going to be tough, but Pramila Le Hunte gave it her best shot.
Read more

The president’s trust ratings regarding the coronavirus rank lower among those surveyed than other prominent sources of information.
Read more

Brittany's mom Robin makes a terrifying discovery at her daughters apartment. The pregnant 25-year-old is found strangled and stabbed to death on her bedroom floor... her small home ransacked. Could this be a burglary gone bad, or cold-blooded murder?
Read more

Hozier opens up about his childhood, songwriting process

“Take Me to Church,” is the breakthrough smash hit for Irish musician, Hozier. The singer-songwriter, who turns 30 on Tuesday, is a multi-platinum, Grammy-nominated artist with powerful activist anthems that have made him a household name. Anthony Mason speak…
Read more

How to Watch Andrea Bocelli’s Easter Concert Live From...

The acclaimed opera singer will offer a special Easter concert to stream on YouTube for fans across the world.
Read more

Thousands of kids may die of preventable causes during...

Who Could Bernie Sanders Pick to Be His Vice...

The senator from Vermont and his surrogates have offered some clues as to who the progressive presidential hopeful could choose.
Read more

President Trump on Friday suggested he has the power to decide what information a newly created inspector general can give Congress, with the watchdog charged with overseeing hundreds of billions of dollars in aid from th...
Read more

Michael Phelps opens up about the toll COVID-19 has...

Olympic swimming champion Michael Phelps is opening up about his personal struggles during the coronavirus pandemic. And as Jaime Yuccas reports, it's a powerful message that many can relate to.
Read more

Anti-China sentiment is on the rise

A new POLITICO/Morning Consult poll finds more voters view China as an "enemy" as Trump and Biden trade shots over who's softer on the country.
Read more

Azar said the initial CDC test was problematic but contended it didn't set back its coronavirus response.
Read more

Honor X10 is the latest device from the company with 5G-capable Kirin 820 and a pop-up selfie camera.
Read more

Defenseman Scott Perunovich, one of the best players in college hockey the last three seasons, is under contract with the St. Louis Blues.
Read more

Madison Leaves and Everything Else That Happened On Night One of Peter's...