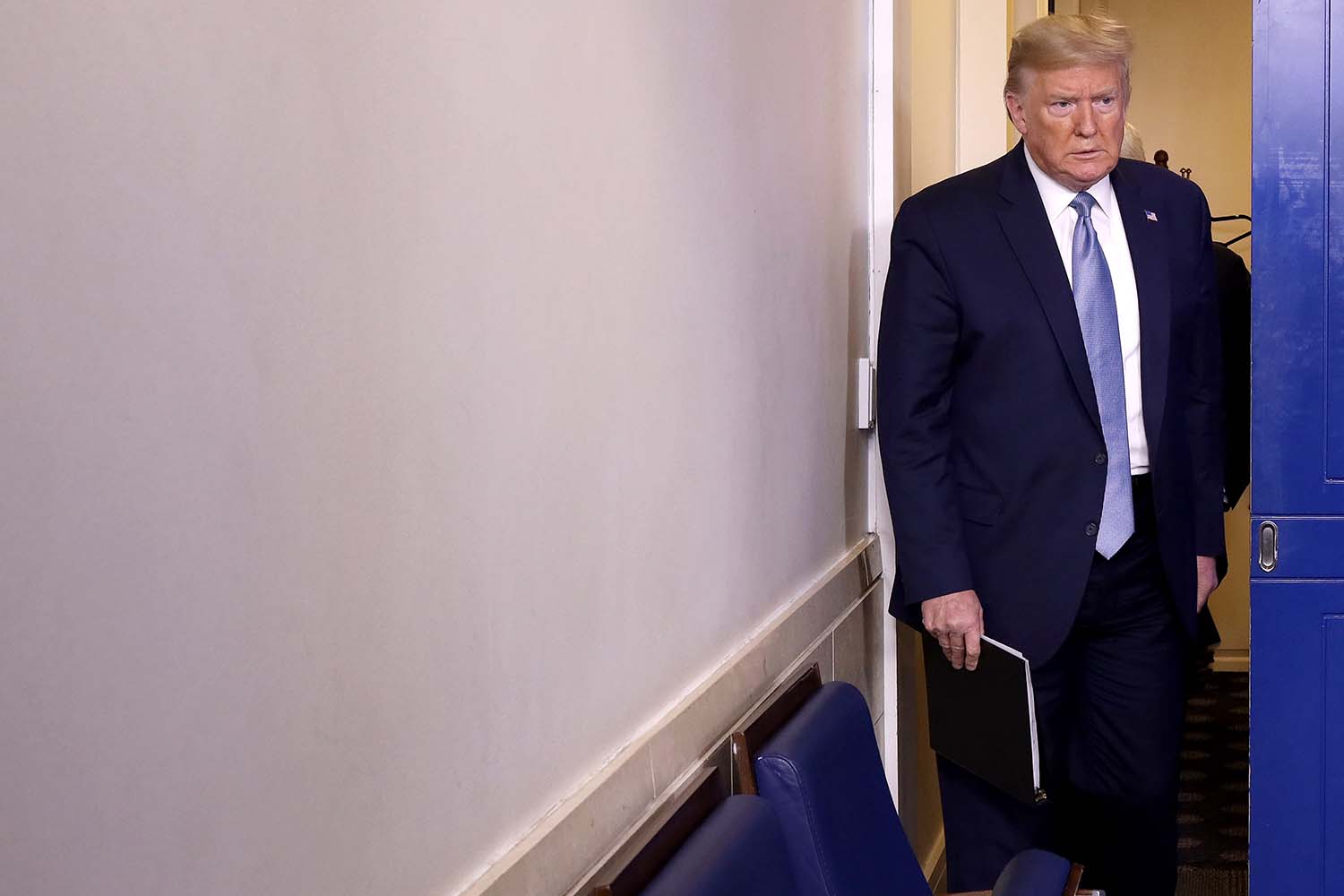 The polls results come after the White House spent weeks downplaying the coronavirus threat to the United States, even as public health officials within the administration sounded alarms over its risk to the country and warned of its rapid rates of transmission.

Only recently has Trump adopted a more somber tone when discussing the crisis, acknowledging Tuesday that this is a very bad one and cautioning Americans that we have an invisible enemy in the coronavirus.

The more dire rhetoric from the president was accompanied by a new series of increasingly stern guidelines from the administration, which recommended avoiding group gatherings of more than 10 people, working or attending school from home whenever possible, and abstaining from eating or drinking at bars, restaurants and food courts.

It remains to be seen whether the latest measures will bolster public confidence in the administrations ability to fight the coronavirus. Just 46 percent of Americans believe the federal government is doing enough to prevent the diseases spread, down from 61 percent in February.

The NPR/PBS NewsHour/Marist poll was conducted March 13-14, surveying 835 adults. The margin of sampling error is plus or minus 4.8 percentage points.

Samsung will sanitize your phone for free using UV...

Some Samsung stores are offering a free sanitizing service to help clean your phone.
Read more

5 things you missed from the Xbox Games Showcase

Microsoft really brought out the big guns with its July Xbox Games Showcase, providing fans with a proper glimpse into the future of the platform.
Read more

"We're going to be able to host a Super Bowl in February," said Florida Governor Ron DeSantis said. "We expect to do a full Super Bowl."
Read more

Okinawa urges US to do more to stop virus...

The governor of the southern Japanese island of Okinawa is urging the government to pressure the U.S. military to do more to stop an escalating coronavirus outbreak at American bases there that has infected more than 130 Marines
Read more

Portland mayor caught up in tear gas at BLM...

CNN’s Toobin torches Twitter on not taking down Trump...

CNN legal analyst Jeffery Toobin on Tuesday ripped Twitter over its decision to not take down tweets from President Trump that promote a conspiracy theory surrounding a woman who died while working at MSNBC host Joe Scarb...
Read more

Why We Can’t be Friends with Our Allies

Biden talks about “friends and allies” as if they’re the same thing. They aren’t.
Read more

The Republican senators argued lawmakers should be in town to approve a half-trillion-dollar bill.
Read more

Makeup sales take a hit as interests shift in...

Makeup hasn't been on consumers' shopping lists during the pandemic, and sales have taken a hit.
Read more

Brands weigh in on national protests over police brutality

As thousands of protesters take to the street in response to police killings of black people, companies are wading into the national conversation but taking care to get their messaging right
Read more

This is the cheapest curved monitor we’ve ever found

Grimes Is A Mom, And You Probably Can’t Pronounce...

On Monday (May 4) 'Miss Anthropocene' singer Grimes and her partner Elon Musk welcomed their first child, X Æ A-12 Musk, together.
Read more

India has registered a single-day spike of 74,442 new coronavirus cases, driving the country’s overall tally since the pandemic began to 6.6 million
Read more

UN expert: Pandemic’s worst impacts on poverty yet to...

The United Nations independent expert on poverty is warning that the worst impacts from the coronavirus pandemic on poverty are yet to come, and that measures taken by governments to protect people so far have been insufficient
Read more

The government would shut down on Oct. 1 if Congress doesn't pass a spending bill in time.
Read more

House to vote on new COVID-19 relief package as...

The House of Representatives is set to vote on a new Democratic-led economic relief package known as the HEROES Act. It comes as House Speaker Nancy Pelosi and Treasury Secretary Steven Mnuchin restart negotiations, but Senate Republican support would still b…
Read more

President Donald Trump once again defended his cognitive abilities in an interview on Wednesday by pointing -- unprompted -- to a test he took in 2018 that is designed to rule out mild cognitive impairment.
Read more

Barr: Floyd’s death was ‘terrible,’ but the reaction to...

Attorney General William Barr said Wednesday the reaction to George Floyd's death in Minneapolis police custody has been "extreme" and blamed it for an increase in violent crime in U.S. cities. B...
Read more

Amber Heard is wrapping up her evidence in Johnny Depp’s libel case against a British tabloid over allegations of domestic violence, further accusing her ex-husband of abusing her when he was high on drugs or was drunk
Read more

A longtime climate change skeptic has been appointed by the Trump administration to help run the federal agency charged with producing "much of the climate research funded" by the government, The Washington Post reported Sunday.
Read more

Germany’s leader has agreed to shoulder some of the burden, but four "frugal" EU states are unhappy.
Read more

Over 4,600 deaths have been recorded in China since the outbreak of coronavirus was first identified in Wuhan in December last year.
Read more

What’s next: How UK’s election Thursday will affect Brexit

The election taking place in the U.K. on Thursday will bring a new Parliament to power and determine the course of Brexit
Read more

The Department of Agriculture's (USDA) National Veterinary Services Laboratories announced Tuesday that it found the first confirmed case of a dog contracting the coronavirus in the U.S.The USDA said ...
Read more

Titanic salvage firm gets approval for controversial plan to...

A salvage firm has received approval from a judge in Virginia to remove the telegraph machine from the famous wreck that was used to send distress signals when the liner sank more than 100 years ago.
Read more

Liverpool boss Jurgen Klopp says the champions have a different approach in the transfer market than rivals "owned by countries and oligarchs".
Read more

Random House will publish a book edition of the House Intelligence Committee's findings on President Trump in its ongoing impeachment inquiry, the Associated P...
Read more

Netflix Party lets you sync playback with your friends – but only...