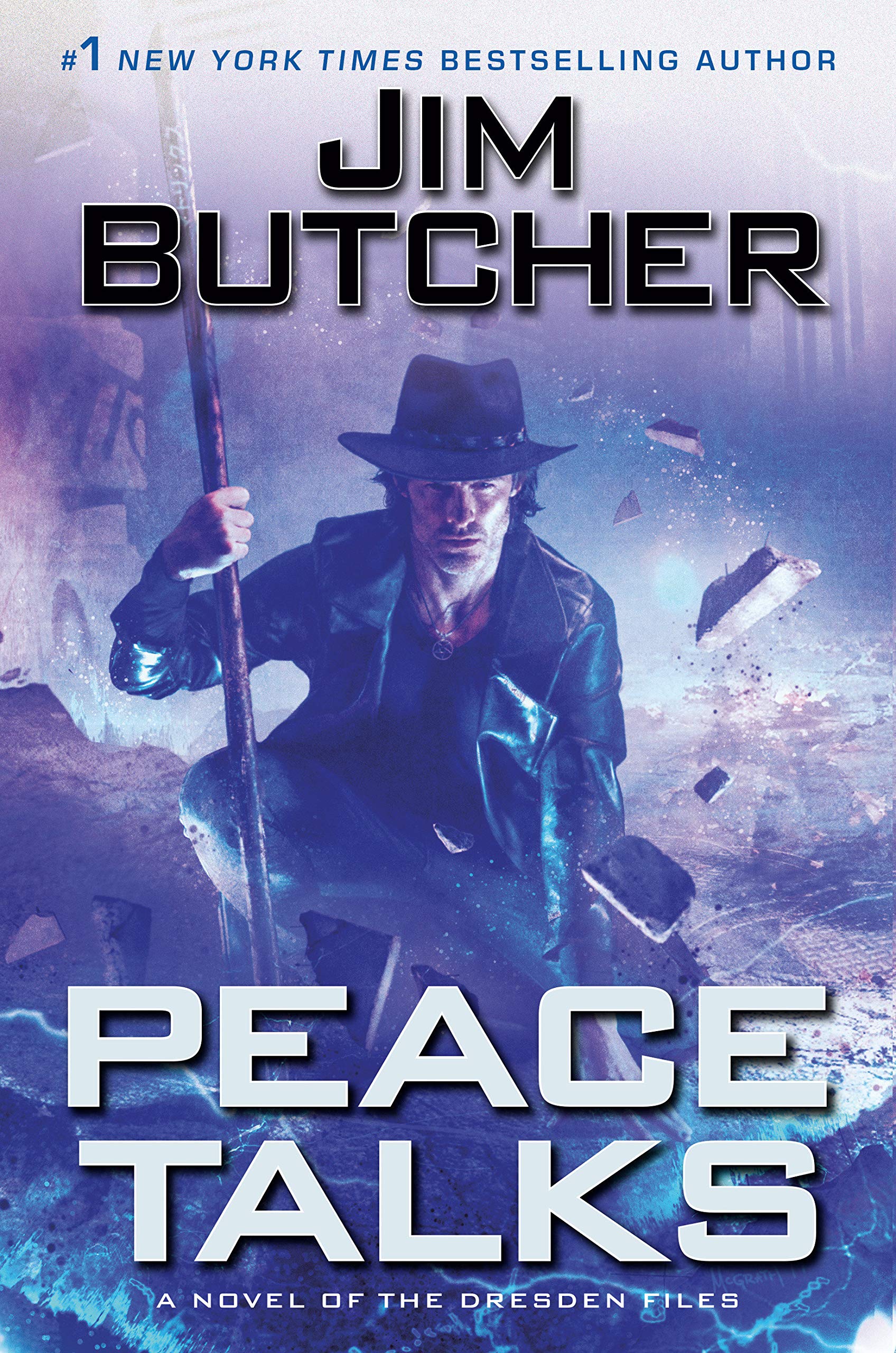 Book 17 in TheDresden Files series by Jim Butcher will be titled Battle Ground and is expected out this year, with a release date announced for a little more than two months after the release of Book 16, Peace Talks.

According to the trailer’s writer and director, Priscilla Spencer, who answered questions alongside Butcher in a streaming Q&A, the Peace Talks book trailer also includes scenes from Battle Ground, giving readers a sneak peek at both Book 16 and Book 17 of the series.

In Peace Talks, the first new book in The Dresden Files series since 2014’s Skin Game, private detective and professional wizard Harry Dresden is enlisted by the White Councilan international organization of wizardsto provide security for a summit between the supernatural nations of the world. But his job won’t be easy, because, according to the press release announcing the July release date for Peace Talks, “dark political manipulations threaten the very existence of Chicago.”

In Battle Ground, Chicago is once again under threat. Here’s the official synopsis for Book 17 in The Dresden Files series:

“Harry has faced terrible odds before. He has a long history of fighting enemies above his weight class. The Red Court of vampires. The fallen angels of the Order of the Blackened Denarius. The Outsiders.

But this time it’s different. A being more powerful and dangerous on an order of magnitude beyond what the world has seen in a millennium is coming. And she’s bringing an army. The Last Titan has declared war on the city of Chicago, and has come to subjugate humanity, obliterating any who stand in her way.

Harry’s mission is simple but impossible: Save the city by killing a Titan. And the attempt will change Harry’s life, Chicago, and the mortal world forever.”

Peace Talks and Battle Grounds are more intimately connected than typical entries in The Dresden Files, since the two were once a single novel that sprawled into what Butcher described as a “Frankensteinian thing.”

Eventually, Butcher agreed to split the manuscript into two books, with the condition that both books hit shelves in the same year.

The Dresden Files began in April 2000 with the release of Storm Front. In the 14 books released since, Butcher has developed an expansive world of magical factions, with wizards, werewolves, vampires and demons vying for control of the world. The five most recent books in the series have all debuted as #1 New York Times bestsellers.

Butcher expects to finish The Dresden Files series in 25 books, including a finale trilogy of novels.

A recent surge in positive COVID-19 cases and hospitalizations in El Paso, Texas, has caused city officials to order a curfew for residents.
Read more

Mary Trump paints a disturbing picture of her uncle, President Trump, in a forthcoming book that accuses him of "cruelty and incompetence" and a penchant for lying and cheating that dates back to when he was a young adult...
Read more

Search under way in Aberystwyth after child falls into...

Aberystwyth lifeboat says it is searching for a missing child believed to have fallen into a river.
Read more

Photographer David Vintiner's portraits feature subjects identifying as "transhuman," including a man with bionic ears and a woman who can "feel" earthquakes.
Read more

Frustrated with a lack of progress in Brexit talks, Prime Minister Boris Johnson introduced his own legislation to solve the Irish border question.
Read more

Palestinians say they were not informed of UAE-Israel flight

Manchester United midfielder Jesse Lingard says he was "lost as a player and person" during a difficult season.
Read more

Two potential coronavirus vaccines have shown promising results in early trials, but experts warn that some of the biggest hurdles still lie ahead.
Read more

European football: Pick your best XI from the champions...

Admiral James Stavridis (Ret.), former Supreme Allied Commander at NATO, member of the Carlyle Group and author of "Sailing True North: Ten Admirals and the Voyage of Character" spoke with Brian Kilmeade and agreed with Chairman of the Joint Chiefs of Staff, …
Read more

Fox News cuts away from WH press briefing after...

Professor on leave after video showed him using N-word...

Video appears to show the professor telling his educational psychology students they could use the N-word because it would be in a "pedagogical sense."
Read more

The streaming service is still slated to debut in several European markets on March 24, even without the glitzy press showcase.
Read more

Amy Winehouse’s mother is honoring her daughter on the ninth anniversary of the singer’s death.
Read more

US again accuses Russia of sending arms and mercenaries...

The US military has again accused Russia of sending weapons, including anti-aircraft missiles, to Libya and sending Russian mercenaries to operate on the front lines of the conflict there.
Read more

Sending in 150 federal agents to help a police force of 13,000 won't help much, but giving federal attention to the gun dealers that supply so many crime guns in Chicago, and helping equalize funding in grievously underserved school districts in poorer commun…
Read more

Tropical Storm Sally is expected to make landfall on Tuesday, bringing heavy rainfall and storm surge flooding to the Gulf Coast less than a month after Hurricane Laura hit the area.
Read more

Parts of the presidential battleground states of Minnesota, Wisconsin, Michigan, Pennsylvania and Ohio fell short of delivery goals by wide margins as the agency struggles to regain its footing after a tumultuous summer.
Read more

AP FACT CHECK: Trump and Biden in their last...

The past week in U.S. politics featured the final debate of the presidential campaign before the Nov. 3 election
Read more

A woman who spoke at President Trump's recent campaign event in Arizona drew a wave of backlash online for comments she made about Quaker Oats' decision to change the name and imagery associated with its Aunt Jemima brand...
Read more

Trump says he ‘learned a lot’ about coronavirus during...

President Trump on Sunday said he "learned a lot about COVID" since his diagnosis, calling his time undergoing treatment the "real school" about the highly contagious virus that has infected more than 7.4 million pe...
Read more

There are fears France's fastest growing city this decade could be vulnerable after the pandemic.
Read more

A top federal bank regulator on Wednesday released a sweeping revision of anti-redlining rules Wednesday amid reports about his pending resignation, spurring alarm and confusion among the banking industry and its critics....
Read more

What Walmart, Target, Kroger and Other Grocery Stores Are Doing to Protect...