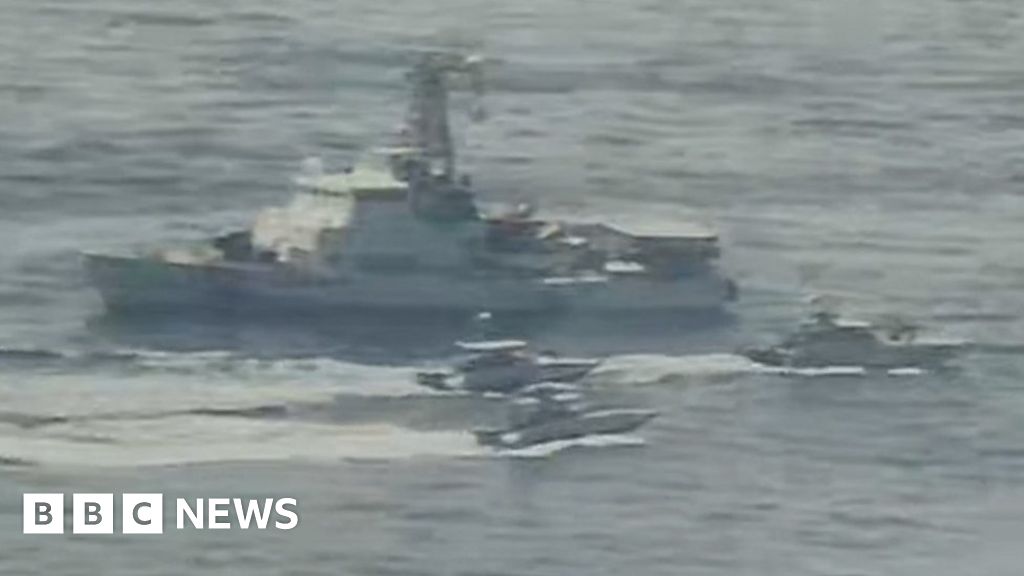 The US Navy has accused Iran’s Islamic Revolution Guard Corps (IRGC) of “dangerous and provocative actions” in international waters in the Gulf.

Eleven IRGC Navy vessels repeatedly conducted “harassing” approaches of six US Navy and Coast Guard ships on Wednesday, it said. One passed within 10 yards (9m) of a Coast Guard cutter.

The US vessels were involved in a military exercise with US Army Apache attack helicopters.

There has been no word yet from Iran.

The incident came a day after armed men – believed to have been IRGC personnel – seized a Hong Kong-flagged tanker in the Gulf of Oman and redirected it into Iranian waters before releasing it.

The US Navy said that during Wednesday’s exercise the IRGC vessels crossed the bows and sterns of the US vessels at “extremely close range and high speeds, including multiple crossings of the [USS Lewis B] Puller with a 50 yard closest point of approach and within 10 yards of [USCGC] Maui’s bow.

“The US crews issued multiple warnings via bridge-to-bridge radio, five short blasts from the ships’ horns and long-range acoustic noise maker devices, but received no response from the IRGCN.”

“After approximately one hour, the IRGCN vessels responded to the bridge-to-bridge radio queries, then manoeuvred away from the US ships and opened distance between them,” it added.

The US Navy said such “dangerous and provocative actions increased the risk of miscalculation and collision”, and were not in accordance with international maritime conventions or customs.

Last year, Iranian forces seized a British-flagged tanker in retaliation for the seizure of an Iranian tanker by the British territory of Gibraltar. Both vessels were eventually released.

The US also accused Iran of carrying out attacks on six tankers in the Gulf of Oman and launching missiles and drones at two oil facilities in Saudi Arabia. Iran denied any involvement.

Tensions between the US and Iran rose further in January, when the US killed a top IRGC general in a drone strike in Iraq. Iran responded by launching missiles at Iraqi military bases hosting US forces.

Trump Victory — a Trump campaign and RNC fundraising committee — paid over $380,000 to the Trump Hotel Collection on March 31 and April 1.
Read more

Tara Reade’s Lawyer No Longer Representing Her in Joe...

Douglas Wigdor announced he would no longer be representing Tara Reade a day after California defense attorneys say they will review cases in which Reade testified.
Read more

Senate Republicans: No reason for Biden to ‘sound the...

The GOP comments came a day after Biden offered his starkest warnings to date against any interference by Russia or other foreign governments.
Read more

Scientists have tracked a cuckoo's migratory flight from Africa to its breeding ground in Mongolia.
Read more

Meghan McCain shared a photo of her late father with the caption: "I like people who don't lose Arizona."
Read more

Clubs could be fined or deducted points or have individual players banned for breaches of coronavirus rules when the Premiership season restarts.
Read more

Stocks are steady on Wall Street at the end...

President Trump on Sunday announced his administration is limiting travel from Brazil as the Latin American country sees a surge in coronavirus cases."Today, the President has taken decisive action to protect our c...
Read more

Over 88,000 migrants trying to enter US illegally turned...

More than 88,000 immigrants trying to enter the U.S. illegally have been turned back since a Centers for Disease Control emergency health order in response to the coronavirus crisis that allows for illegal immigrants and asylum seekers to be quickly removed f…
Read more

Johnny Russell scored the earliest goal in Sporting Kansas City history, which helped his side defeat Real Salt Lake 2-0 and secure a spot in the MLS is Back Tournament’s Round of 16.
Read more

Coronavirus: Thousands of homeless ‘back on streets by July’

Rough sleepers who were given emergency accommodation could be evicted within weeks, a charity warns.
Read more

How these top chefs are riding out the pandemic

CNN Travel caught up with three of our favorite chefs -- Llewellyn Clark of Nevis, Missy Robbins of Brooklyn and Ludo Lefebvre of Los Angeles -- to find out how they're coping during the pandemic
Read more

The governor's decision to reopen all brick and mortar schools in August caused a backlash among teachers.
Read more

Chileans have voted overwhelmingly in favor of drafting a new constitution to replace guiding principles imposed four decades ago under the military dictatorship of Gen. Augusto Pinochet
Read more

The arson attack killed 36 people, but Shinji Aoba was too badly burned to be detained until now.
Read more

Businesses are walking a fine line between keeping people safe and protecting their privacy.
Read more

When the soundtrack for “Trolls” came out in 2016 there was only one song that everyone knew, Justin Timberlake's chart-topping “Can't Stop the Feeling!”
Read more

Channel migrants: Deaths should be ‘a wake-up call’ for...

Charities call for a legal route for refugees to reach the UK, after four die crossing the Channel.
Read more

Trump shifts messaging: Coronavirus ‘will get worse before it...

In the first such briefing in three months, the president acknowledged the real scope of the pandemic’s impact in the U.S.
Read more

Trump backs McDaniel for another term as RNC chair

President Trump on Wednesday backed Ronna McDaniel for a third term leading the Republican National Committee."I am pleased to announce that I have given my full support and endorsement to Ronna McDaniel to continu...
Read more