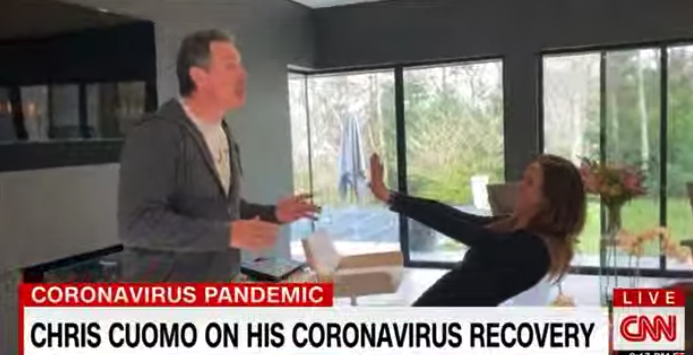 CNN anchor Chris Cuomo on Monday aired a clip showing his emergence from the basement where he was quarantined for more than two weeks after being cleared by the CDC for coronavirus.

“This is what I’ve been dreaming of literally for weeks,” Cuomo said as he walked up the stairs from his basement into the living room of his house. He walked towards his wife Cristina Cuomo, who tested positive for COVID-19 earlier this month, and announced that she had also been “cleared by the CDC.” The family’s union, captured by Cuomo’s daughter Bella Cuomo, aired on Monday’s Cuomo Prime Time.

“This is the dream. Just to be back up here doing normal things,” the host said.

Since announcing his COVID-19 diagnosis late last month, Cuomo has continued to anchor his weeknightly show from the basement of his home. He has also been updating the public about his battle with the novel virus. Last week, Cuomo revealed that his wife had also tested positive for the coronavirus.

“It really rocked us when Cristina got a case, albeit much more mild than mine,” Cuomo told CNN chief medical correspondent Dr. Sanjay Gupta on Monday. “The misses going down took a toll on us. It spooked the kids. There’s a little bit of a trauma and recovery process that we will have to go through.”

Cuomo detailed the initial stages of his recovery process, which includes a roughly 20-minute walk and other physical exercises. “I was exhausted,” he said. “I felt pain, I felt strain.”

Throughout his nearly-month-long battle with COVID-19, Cuomo has warned that the disease causes emotional and psychological illness, as well as physical. “It is causing people depression,” he said earlier this month. “And it’s creating brain fog. It’s creating edginess in people. I’m experiencing that. It messes with your head, this virus. I don’t know where it leaves you afterwards.”

In the early stages of his infection, Cuomo said his fever was so bad that he hallucinated seeing his deceased father, former New York Governor Mario Cuomo. “I was up all night, I’m telling you, I was hallucinating,” he said. “My dad was talking to me.” On his physical symptoms, Cuomo said “my chest is tight, my breath is short, it hurts in the mornings. It feels like I’m going to bring up a lot more than I do.”

Coronavirus: YO! Sushi to shut restaurants and cut 250...

The company, known for its conveyor belt service, has launched a company voluntary arrangement.
Read more

Robert Fuller had prior reports of suicidal idealization and he had disclosed that "he did have a plan to kill himself," according to the Los Angeles Sheriff's Department.
Read more

Nursing home advocates are raising the alarm that states are reopening their economies without the ability to protect residents. Nursing homes have been devastated by COVID-19, and advocates say states and the Trump administration have failed...
Read more

The Force was a little less strong with “Star Wars: The Rise of Skywalker
Read more

A Hispanic activist in New Mexico has started a campaign to censor Chicano studies because he's mad at the monuments being taken down.
Read more

Carlson said at the end of the show that he would be leaving on a "long-planned" vacation to go "trout fishing."
Read more

Rumer Willis opens up about losing virginity to ‘older’...

Rumer Willis, the daughter of Bruce Willis and Demi Moore, got candid on an episode of "Red Table Talk."
Read more

Dak Prescott reportedly turned down a contract worth $175M over 5 years. Hear why Colin Cowherd thinks if this is true, the Dallas Cowboys should let him walk.
Read more

China silent amid global calls to give Africa debt...

A "poisonous ideology" endures despite the group losing territory in Syria and Iraq, a minister says.
Read more

Aluko backs targets for BAME inclusion at top of...

An Arizona man was arrested after pointing a gun...

An Arizona man has been arrested and charged after pointing a gun at a DoorDash delivery man, Mesa Police confirm.
Read more

A man was shot and killed during a protest in Austin, Texas, on Saturday night, according to police.Officers were on scene monitoring the protests when shots were fired around 9:52 p.m., Austin p...
Read more

House Democrats push for resuming aid to Palestinians in...

House Democrats on Thursday advanced an amendment that would restore millions of dollars in aid to Palestinians cut by the Trump administration two years earlier, as part of a multi-billion dollar spending bill under consideration.
Read more

"It might well have been picked up on Biden's microphone, and it still would have disrupted the proceedings in the hall," Wallace said.
Read more

Major Asian stock markets are mixed as U.S.-Chinese tension over Hong Kong competes with optimism about recovery from the coronavirus pandemic
Read more

Greece warns will do “whatever necessary” in East Med...

Norway and Chelsea midfielder Guro Reiten extends her contract with the Blues to 2023 after an impressive debut season.
Read more

Gold prices continued their scintillating run Wednesday, rallying yet again to hit an all-time high of above $1,950 an ounce.
Read more

Steve McClaren: Former England boss will not be Dundee...

The top U.S. general is quarantining at home after a Coast Guard admiral tested positive for the coronavirus.Chairman of the Joint Chiefs of Staff Gen. Mark Milley is one of several military offi...
Read more

Trump tries to restrict undocumented immigrants from the census

Trump aims to exclude immigrants in the U.S. illegally from the process that determines how many members of Congress are allocated to each state
Read more

Anthony McGill profits from an "absolutely fabulous" bit of luck as he flukes a red into the top corner during his World Snooker Championship semi-final against Kyren Wilson.
Read more

Presidential historian Jon Meacham referred to President Trump's supporters as "anguished, nervous" white men with a "lizard brain" during post-debate coverage of the second and final showdown between President Trump and...
Read more

Pakistani authorities say rescuers have recovered nine more bodies from beneath the rubble of a building that collapsed earlier this week in the southern port city of Karachi, bringing the death toll to 22
Read more

Not Even South Korea Deserves Unlimited Defense From America

Trump is at least challenging a bizarre status quo that assumes the U.S. must forever protect prosperous and populous allies. The post Not Even South Korea Deserves Unlimited Defense From America appeared first on The American Conservative.
Read more